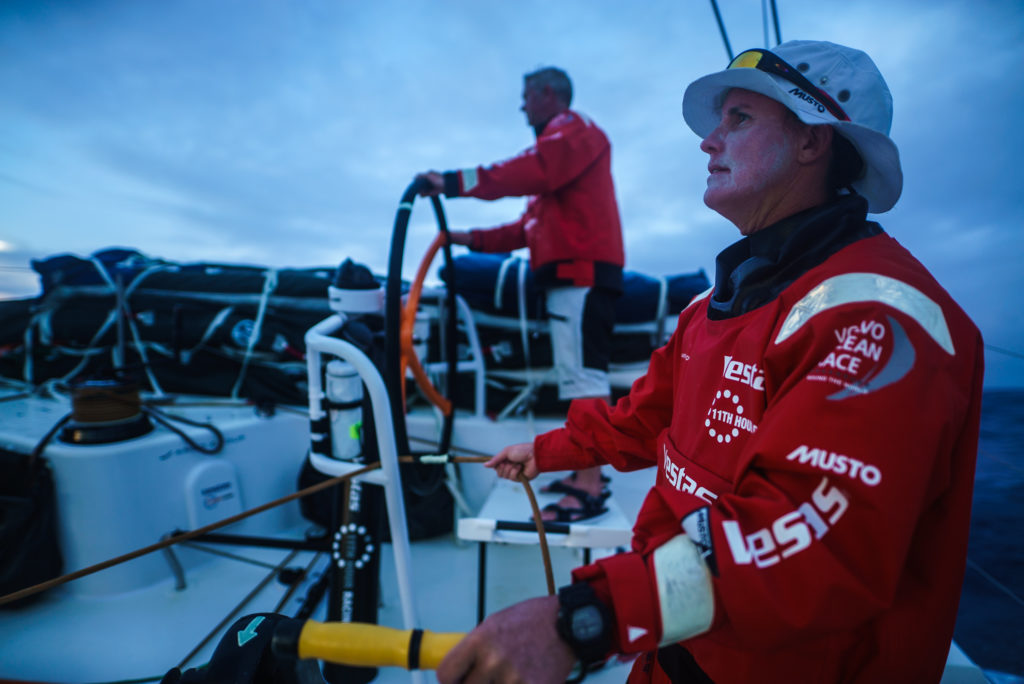 Stacey Jackson stands by to trim for Tony Mutter on board Vestas 11th Hour.
Photo by Amory Ross/Volvo Ocean Race

In the very early hours of this morning we sailed over the Mariana Trench just south of the deepest known point in Earth’s oceans, Challenger Deep. It is nearly 11,000 metres deep (37,000 feet, 7 miles, 11 km), which is deeper than Mt Everest, Earth’s highest mountain, is tall. It’s practically space.

As I made a round of coffees for the on-deck watch my mind wandered… I wished I had a penny to flick over the side. How long would it take to descend to the ocean floor? How far from here would the currents take it? I envisioned its slow descent, twisting and turning into darkness. What amazing creatures would it pass on the way down, what unknown things would it find for company in the abyss?

This is obviously a race first and foremost, but in the three I’ve been a part of there’s always something more meaningful than 1sts and 2nds: a tangible grasp of the planet we live on. A greater sense for the distance between continents, the vastness of its remoteness, the untold stories and faraway places we never knew of. We get to see some incredible things circuiting the world’s oceans and it’s one of the most rewarding components of this storytelling job.

Sharing our adventures may spark a curiosity that in the Google-age could inspire someone to do something great. That could be a kid in a classroom who becomes the world’s next deep-sea trench explorer. Or maybe it’s a future whale expert, mesmerised as we were by our special encounter a week ago. A conservationist, concerned with increasing ocean plastics. Or simply buying a book on Micronesia’s storied WWII history, and specifically the Truuk atoll, now a world-famous dive sight.

The above is not to take away from this 1,500 mile drag race northwest, but for as fun as sailing downwind in a tropical 22 knots for four consecutive days can be, it can get monotonous. We get into some great conversations huddled at the back of the yacht, talks that often lament the lack of opportunities to use sailing as a means of adventure. Why must we always race past these places? Almost all of us have had the misfortune of being marooned somewhere by this race and we unanimously look back fondly on those memories. Extra special pins on the map… Maybe the next Volvo you have to stop twice per leg and stay for 24 hours at each place before you’re allowed to resume racing, “Parts Unknown – Volvo Ocean Race edition”?!

Anyway. Time to wrap this ramble up and get on deck to enjoy a bit of glamour sailing. Apologies for the stream of consciousness! The Scallywag hunting continues while trying not to spend too much time looking in the rearview…