Route Du Rhum. Another Pasting to Come for Class 40s

Followers of Donald Alexander, who is sailing his Class 40 ‘Power of One’ under the Point Yacht Club burgee, will be pleased to hear that he is safely docked in La Coruna, Spain, and busy effecting repairs so that he can get back onto the race course as quickly as possible. 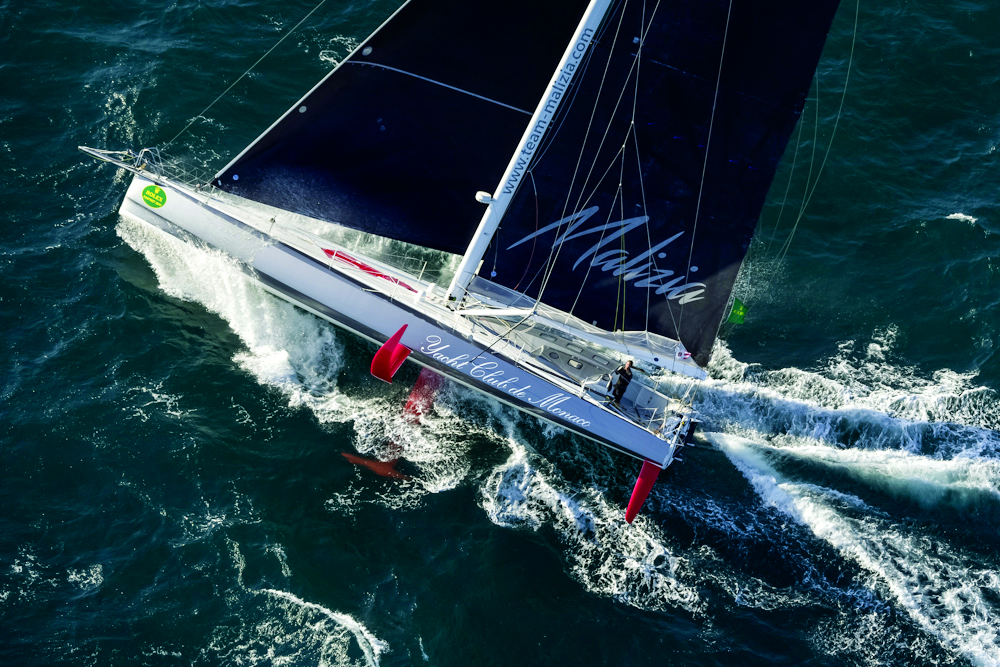 Way down south, more than 1,800 nautical miles southwest of Saint Malo, in the warmer climes and flatter seas west of the Canaries, François Gabart continues to blaze a trail to Guadeloupe chased by Francis Joyon.

But as the days and hours tick by in the 2018 Route du Rhum-Destination Guadeloupe solo transatlantic race, Joyon has found it harder to stay in touch with his younger rival. The skipper of ‘IDEC Sport’ is now trailing Gabart’s blue and white rocketship, ‘MACIF’, by over 120 nautical miles.

The two leading boats in the ULTIME class in this four-yearly 3,542-mile race are now more than halfway to Pointe-à-Pitre and the routing shows that Gabart should be able to add yet another victory to his glittering CV sometime between Saturday night and Sunday morning. This means the seven-day, 15-hour record set by Loïck Peyron four years ago is very much under threat.

Gabart is now moving into the trade winds and the downwind phase of the race and he is enjoying himself. “Things aren’t going too badly – I’m pleased with what I managed to do during the night,” he said earlier today. “I’m well positioned in comparison to ‘IDEC’…I’m not easing off and I am giving it my all…I’m obviously going to keep it up until the finish, although I am not about to go crazy either. 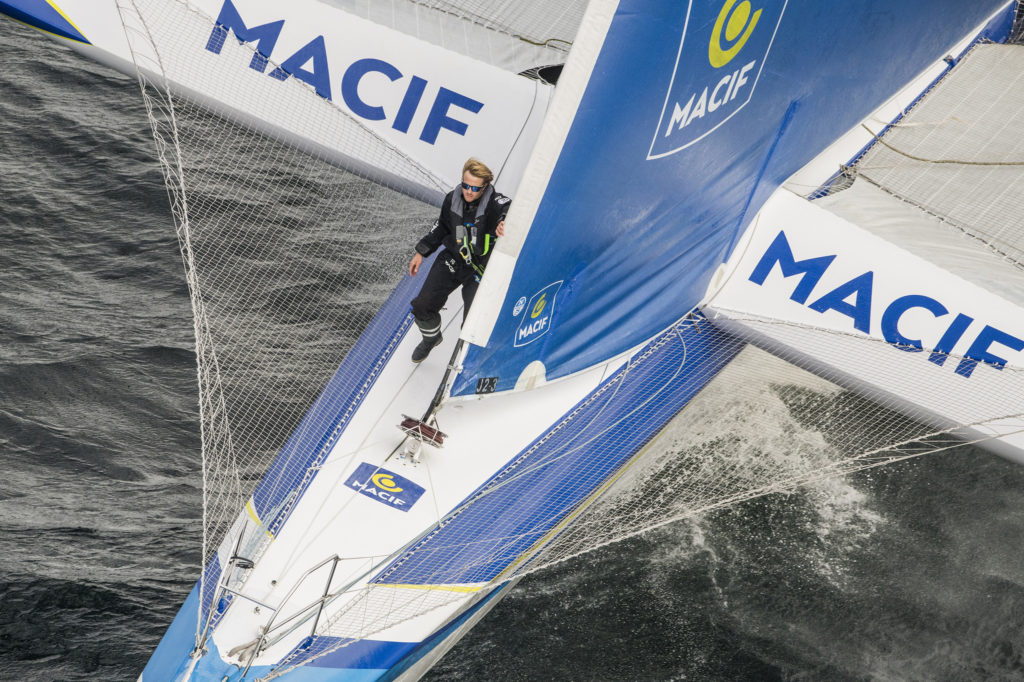 “In theory there aren’t any tactical choices here in terms of my course,” he added. “It’s just about settling in the trade winds now, but I need to avoid getting too tired…I don’t know exactly when we’ll be in the real trade winds – but it shouldn’t be too far away now.”

The front-running IMOCAs, meanwhile, are now out of the worst of the weather in the north Atlantic and heading towards the Canaries with Alex Thomson on ‘Hugo Boss’ still leading around 145 miles west of Madeira. Behind him the German sailor Boris Herrmann on ‘Malizia II-Yacht Club De Monaco’ is listed as second on the Tracker because he is further west than Thomson, but he is also 400 miles north of the British sailor.

In reality the race for the podium in this highly competitive fleet still looks to be between Thomson, Paul Meilhat on ‘SMA’, Vincent Riou on ‘PRB’ and fifth-placed Yann Eliès on ‘UCAR-Saint Michel’. The next challenge is to get through a light airs patch before they hook into the northeast trade winds that will propel them downwind to the Caribbean.

Herrmann has been looking at the endgame of this race as he prepares for the light-wind phase to come. “The high is a bit dangerous,” he said. “The others in the east are heading for a good trade winds situation but then after the trade winds they will be dead upwind of Guadeloupe. I am trying to position myself a bit more on the rhumb line so when I leave the trade winds, I have a better routing angle.”

Unfortunately for the slower monohulls, among them the Class40s, the next 48 hours will be dominated by another west and southwest gale when the already tired and cold skippers will have to beat into more big seas as they try to get west and south and out of the disturbed air in the north Atlantic.

Yoann Richome has continued to extend his lead on ‘Veedol-AIC’ with Britain’s Phil Sharp on ‘IMERYS CLEAN ENERGY’ in second place and Aymeric Chappellier third on ‘Aina Enfance Et Avenir’. Behind them and now in 8th place 24-year-old Jack Trigger from Britain, on his first solo transatlantic, is sailing an impressive race on ‘Concise 8′, having climbed from the mid-20s to the top-10.

“It’s good,” he said in his first media contact since the start on Sunday. “It has been tough. Last night was particularly hard to the point where I saw four knots of boatspeed and 40 knots of wind. I am having problems with my autopilot, but I think I have fixed that. I am happy with my race from the beginning – very conservative so far, just slowly ramping it up and still holding back as I have another big depression coming through tonight and tomorrow.”

Trigger is hoping that his radical Class 40 design will fly once he gets south into the trades. “That was always the plan to keep the boat in one piece and to keep me in one piece, then get into the more downwind conditions that the boat is suited to. Then I will try and up the pace a bit. I feel good,” added Trigger who is a Type 1 diabetic and has to continually monitor his condition. “The race is not easy,” he said. “It takes a toll on your body. It is possible to get some sleep, but it is quite squally, but I feel pretty good and ready to go for it.”

One hundred and fifty miles north of ‘Concise 8′, the 52-year-old American sailor Michael Hennessey on Dragon in 14th position is ready for one more big bash into tough autumn Atlantic weather. “Looking down the track, it seems as if the 580 miles between here and the Azores creates one more chance for a beating,” he reported. “The weather turns nasty again in the early hours of Friday and should stay that way until Sunday at which time I should be at, or approaching, the islands for a southern fly-by.”

A First-hand Account of the Tough Conditions
British skipper Miranda Merron on ‘Campagne de France’ in Class40s has been showing all her experience in keeping her race on track through the very difficult conditions in the early stages of this race.

Merron is currently lying in 13th place and heading south at a position about 260 nautical miles west-northwest of Cape Finisterre in her impressive-looking lime green monohull. Here is her latest update from on board as she continues in her third Rhum.

“Three low pressure systems down, one to go tonight. The past two have been boat-breaking and the next one promises more of the same. It’s the one marked ‘STORM’ on the American synoptic charts heading for the UK/France tomorrow.

“Top wind speed in yesterday’s horror show was 55 knots. A sail change in ‘just’ 35 knots cost me nine miles in the wrong direction. When things go wrong and it’s windy, it takes a while to sort out, especially alone.

“I will prepare early for tonight’s entertainment, which is promising 30-35 knots for almost 24 hours, so there will be more. I have been living in my drysuit for the past few days – excellent – it really is dry. It’s not coming off anytime soon!

“At times it has been so rough that moving anywhere is risky, so I have also been wearing my crash helmet down below.

“It must be almost dawn, but it’s still a deep black night and impossible to tell the sea from the sky. Civilised windspeed and direction now, and it’s almost dry on deck.

“I got stuck in a no-wind hole for a while, so did some repairs, including to a sail which is now aloft. The job list is quite long! If I had been closer to land, I would have made a pit-stop. All those competitors who went to seek shelter made a smart move!”

So there it is, a highly understated report from one very tenacious and brave woman. 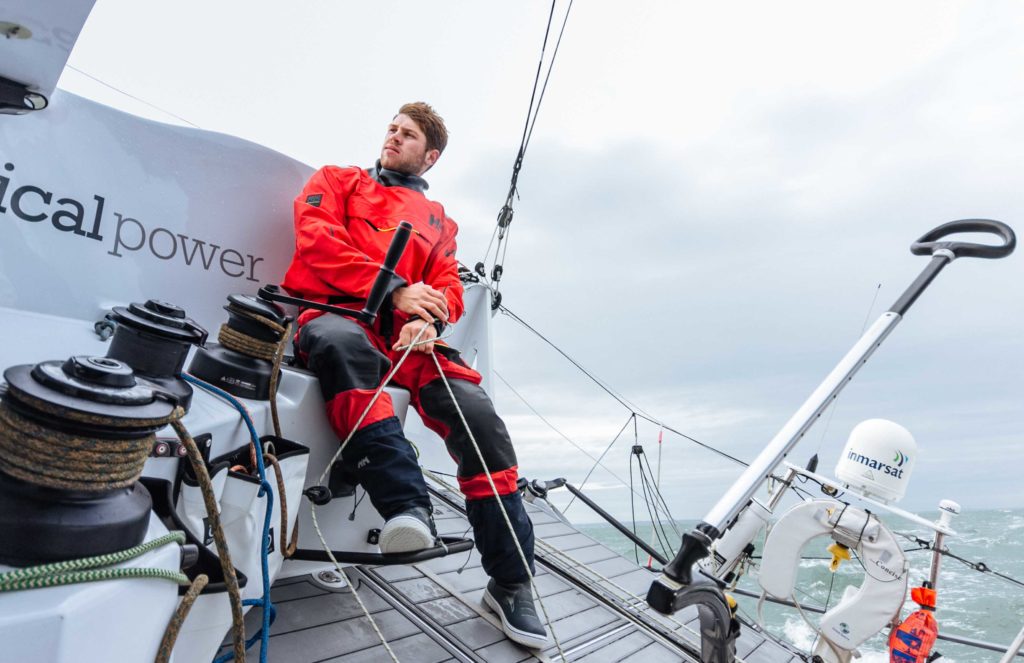 24-year-old Jack Trigger from Britain, on his first solo transatlantic, is sailing an impressive race on Concise 8 Class 40.