Route du Rhum. A Hectic First 24 Hours and As the Storm Looms 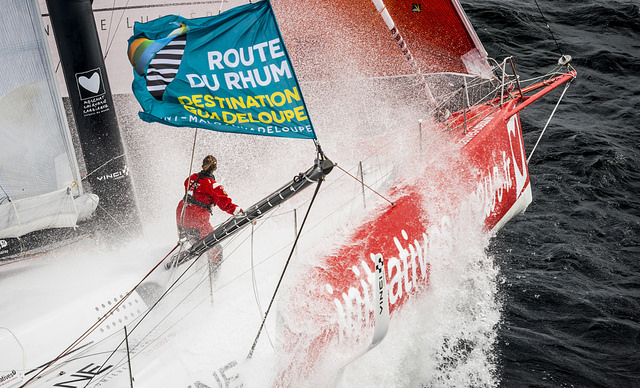 The majority of the 123-strong Route du Rhum-Destination Guadeloupe solo transatlantic fleet has enjoyed a brisk first 24 hours of racing as they head west into the Atlantic.

Our man Donald Alexander on ‘Power of One’ certainly seems to be using his nous as from the tracker it shows him altering course either in search of better wind and direction, or that his routeing software shows that to be the optimum course in light of the massive storm that is due today.

His one change of course at around midday yesterday looked suspect, yet he came back without losing any places, and now lies in 28th place in the Class 40 fleet.

In the last 24 hours he has covered 115 nautical miles and is currently doing a speed of 10.3 knots.

As and when info is received from him, it will be shared.

But while most have settled into the race without major problems, there have been early difficulties for a minority of competitors.

Among them are some of the most closely followed boats, including that of Seb Josse and Thomas Coville in the ULTIME class and Jérémie Beyou on board ‘Charal’ – the newest boat in the 20-strong IMOCA fleet.

Those sailors apart, the opening stages have seen the fleet make rapid progress. Once passed Ushant the choice was whether to head north around the Traffic Separation Scheme at the tip of Brittany or go south and, in the IMOCA fleet, Alex Thomson on ‘Hugo Boss’ led the way on his own in the north. 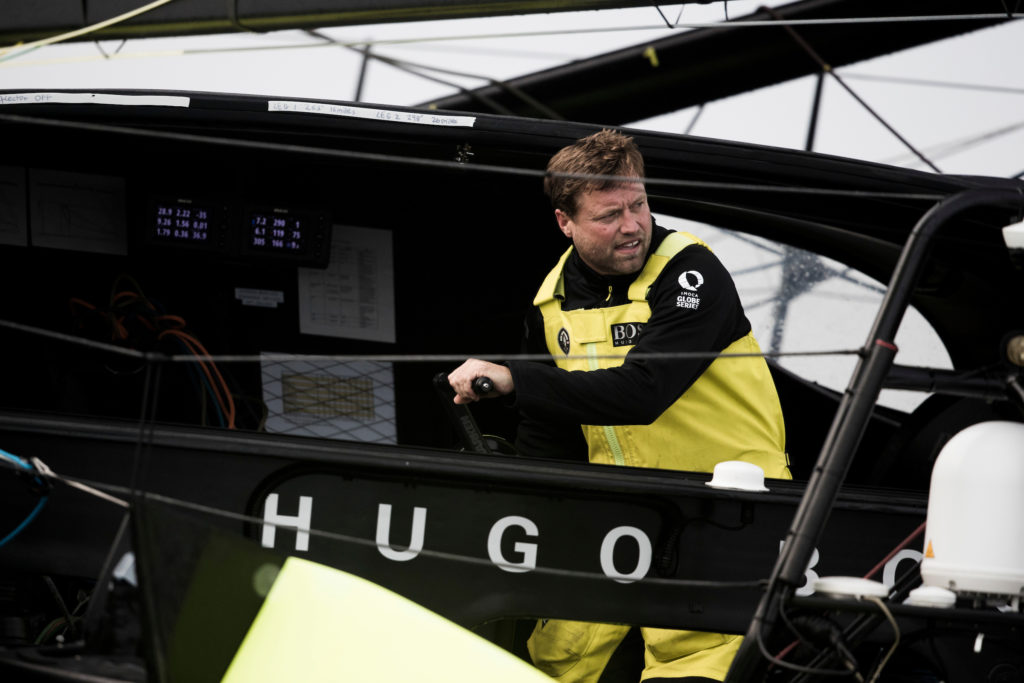 The move has paid handsome dividends for the British skipper as he continues to lead the division going into day two from Vincent Riou on ‘PRB’ and Paul Meilhat on ‘SMA’.

Behind the IMOCAs the battle at the front of the Class40 fleet has been as competitive as might be expected with a tight leading group separated by just a few miles on the water, led by Yoann Richomme on ‘Veedol AIC’.

Britain’s Phil Sharp in seventh place on ‘IMERYS CLEAN ENERGY’ has already had to deal with his first technical failure when an internal ballast tank inspection hatch failed, sending 500 litres of water into the boat. Sharp bailed it out and has made running repairs.

In the wake of the Class 40s the amateur Rhum Multi and Rhum Mono classes have been making good progress with a handful of boats – among them Loïck Peyron on the small yellow trimaran ‘Happy’ – choosing to head for shelter in Brest and other Brittany ports to ride out the storm forecast to hit the fleet tomorrow.

The first boat to hit difficulties was Josse’s ULTIME, ‘Maxi Edmond de Rothschild’, which came to a sudden stop from 25-30 knots of boatspeed just before dawn in the Bay of Biscay at about 135 nautical miles northwest of La Coruna, Spain. The Frenchman went on deck to discover a large part of the forward section of his starboard float had broken off.

Cyril Dardashti, Managing Director of Josse’s campaign, said this was a hugely disappointing blow for Josse who had been tipped as a possible race winner. “We don’t know if he hit something,” he said.

Next to hit trouble was Josse’s fellow countryman Thomas Coville whose ‘Sodebo Ultim’ developed structural problems in one of its forward beams. This has forced Coville also to head to La Coruna to assess the damage with his team.

While Gabart now leads, he is being chased by Armel Le Cléac’h on ‘Banque Populaire’ who made a short pitstop off Roscoff but is now back to just 18 miles behind with Francis Joyon on ‘IDEC Sport’ only another seven miles back in third.

Gabart, who is already well south of Cape Finisterre, summarised his progress in what he called “pretty rough seas” during the first night. “We had a small depression to get round with strong wind from the southwest and big waves early in the evening. Then came a transition area with a bit of a lull when the depression went through, so it was not that simple.”

For Beyou, meanwhile, his first race on board the brand new VPLP-designed ‘Charal’, which sports large foils and an innovative hull design, has not gone as he might have wished. After sailing at the front of the fleet in the early stages, Beyou slipped back in light airs overnight, but then reported steering problems which have effectively stopped him in his tracks.

“I am not getting out of the low, it’s a bit (bad),” said Beyou just before he discovered problems with his steering. “I saw Vincent Riou for a while, but he got away at the end of the night. That’s a bit of a pain. The boat was good at the start. For sure there have been one or two little problems to fix, but nothing big. I am going to grab some sleep and work out how to get out of here. There are big, cross seas and I have just seven knots of wind. I don’t really see when we get out of this bad bit.”

In a happier mood was Britain’s Samantha Davies on Initiatives Coeur in seventh place. “Things are going well but this first little depression was a bit more complicated than we first expected,” she said. “It is hard to get going through these confused seas with not so much wind. We can’t go very fast. I have to really work on the plan for the next 48 hours.”