The Route du Rhum is one of the greats and this years race looks to be one of the greatest ever. The race is run every four years and goes from the beautiful walled city of Saint Malo on the north coast of France to Pointe-à-Pitre in Guadeloupe. It’s a solo Atlantic crossing and in 2014 there were 91 competitors. When the start gun goes this Sunday there will be 125 sailors on the line ready to do battle with the challenging course that includes the English Channel and the cantankerous Bay of Biscay in November. Many boats do not survive the first few days as early winter weather causes havoc. It’s only when the fleet gets past Cape Finisterre on the north coast of Spain that the sailors can feel some relief and start to enjoy the trade-wind ride down to the Caribbean. 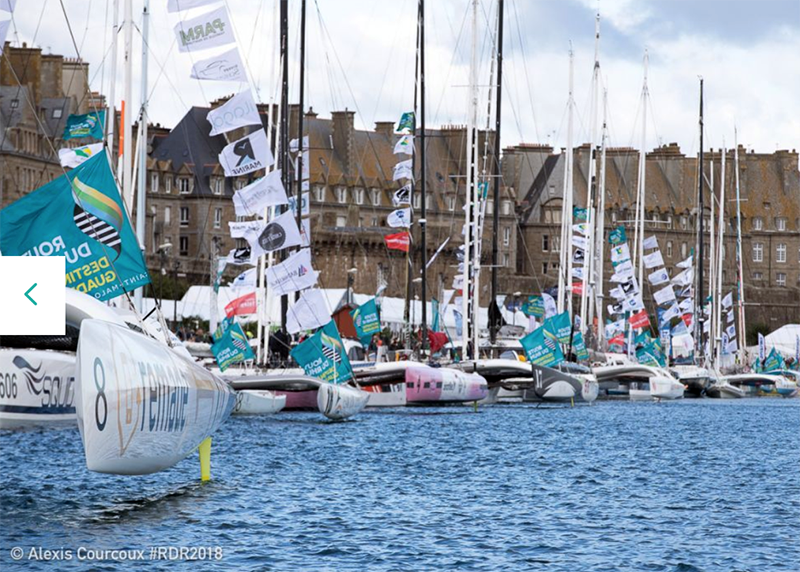 From the start all eyes will be on the Ultimes, the massive multihulls that will be raced by some of sailings finest skippers. Let’s just look at this class for a moment. The favourite to win is François Gabart, the French sailor who not only won his division in the last Route du Rhum, but since went on to set a new single-handed, non-stop record circumnavigation aboard ‘Macif’, his 98-foot trimaran. Gabart is definitely a star, but think about his rivals. Sailing the equally enormous trimaran ‘Banque Populaire’ is the most recent Vendée Globe winner Armel Le Cléac’h who is widely considered the best solo sailor in the world. Then there is Thomas Coville who previously held the record for the fastest solo circumnavigation and Francis Joyon who currently holds the record for the fastest fully-crewed circumnavigation of the world. Quite a line-up and quite a race ahead for them. 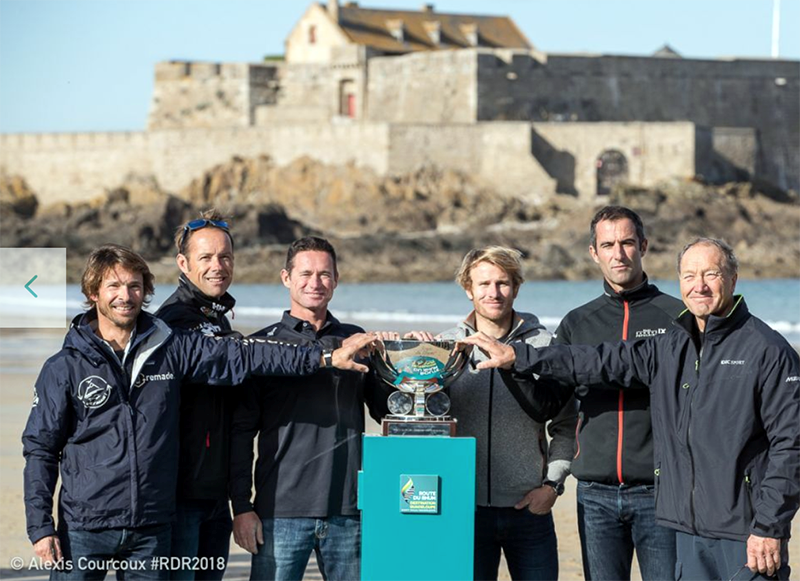 Then there is the IMOCA 60 class, the same boats that are raced in the Vendée Globe. There are 20 boats in this class and all eyes will be on Britain’s Alex Thomson sailing ‘Hugo Boss’ and Jérémie Beyou aboard ‘Charal’. Thomson recently set a new world record for the fastest 24-hour run in an IMOCA 60 cranking out an amazing 539.41 nautical miles while delivering his boat back to the UK this past summer. Beyou is also considered a favourite since he will be racing on the newest IMOCA 60 and the boat looks spectacular. But let’s not forget yet another Vendée Globe winner Vincent Riou and we would be silly to rule out Samantha Davies who finished fifth in the 2008/09 Vendée Globe. It’s going to be one seriously competitive fleet and it’s going to be interesting to see who comes out on top in Guadeloupe.

If the IMOCA and Ultimes aren’t enough to make this an incredible event consider the Class 40’s. There are 53 entries from many different countries including one entry from the US. Michael Hennesy is racing his 2008 Owen Clarke Design ‘Dragon’ and hopes for a good showing on his first solo transatlantic race. “The Rhum is a legendary race which enables amateurs like me to sail in the wake of legends,” Michael points out. “My goals? The first is to make it to the start line and the second is to make it to the finish line. Between the two, I hope to sail an honourable race.”

He will most definitely have some stiff competition including race favourite Phil Sharp from the UK. Sharp won the first Route du Rhum open to Class 40s back in 2006 and he and his team are determined to not only win again, but to be completely carbon neutral throughout the race. His boat, ‘Imerys Clean Energy’, has been fitted with cutting-edge clean energy technologies to power the on board energy demands such as the autopilot and navigation systems. A hydrogen fuel cell, solar, and hydro-generator will power the on board electronics whilst bio-diesel will be used to fulfill the race requirement for motoring in the event of an emergency. 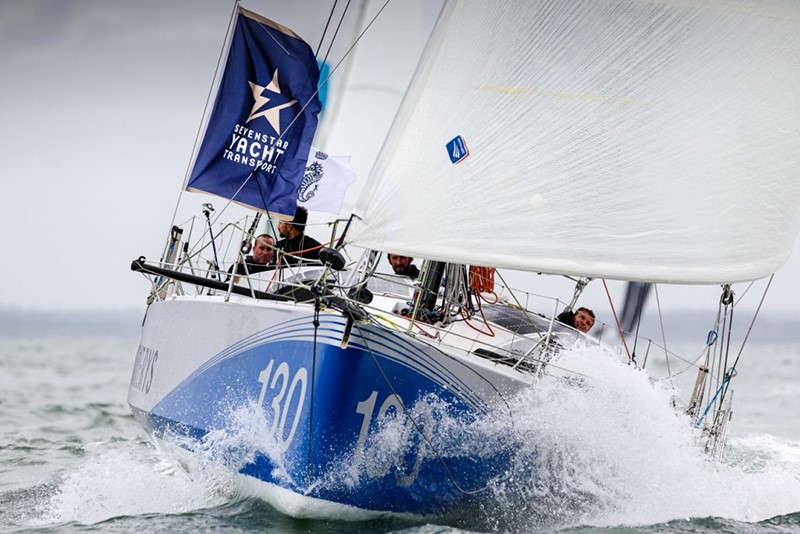 There are three other classes; a 50-foot multihull class and two “traditional” classes, one for monohulls and one for multihulls. This allows some of the older boats (and older skippers) to compete and draws on the rich history of the race. Most prominent among them is the legendary Loick Peyron who will be sailing the 39-foot trimaran designed (and campaigned) by the equally famous Walter Greene. Greene launched the boat in 1981 and it has had an illustrious sailing career since.

If you are a sailor who toils away at your sport wondering if there is any interest in it from the general public may I suggest that you make a pilgrimage to Saint Malo. More than a million people visit the race village and most of them are not sailors. They are Moms and Pops and kids who are quite prepared to stand in the rain for a few hours just so that they can walk the docks in the hope of getting a glimpse of one of the sailors competing in this amazing event.

Saint Malo is a stunning walled city founded by the Gauls in the 1st century B.C. It’s a perfect place to start an epic adventure and the Route du Rhum is truly an epic race. I am sure that the Gauls could never have imagined a fleet of highly strung, futuristic yachts right on their doorstep about to cross the Atlantic each boat crewed by just one person. 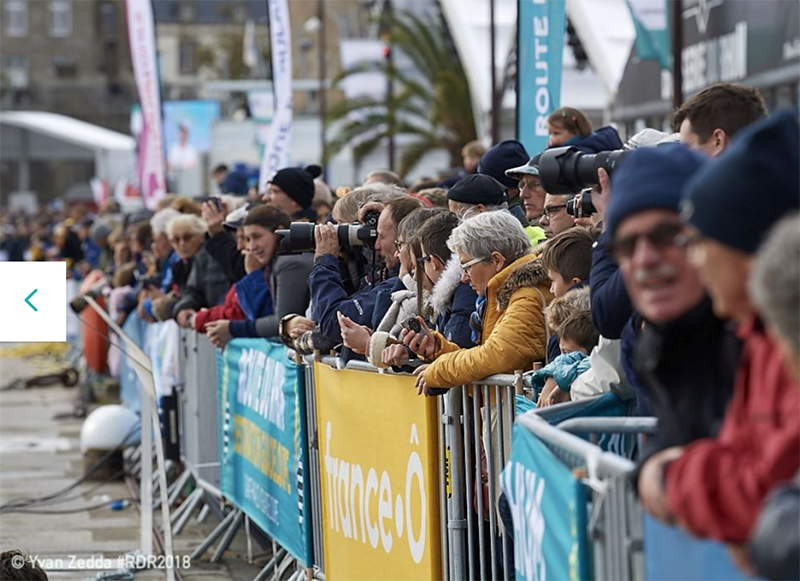 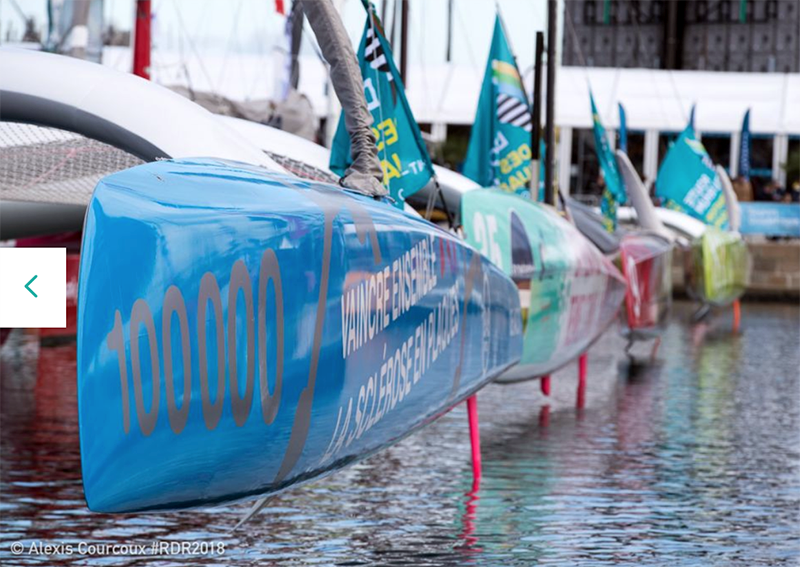