Round the Isle of Wight Race. Highland Fling XI Just Misses Out 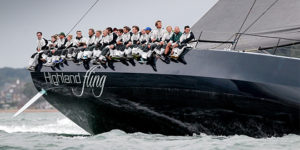 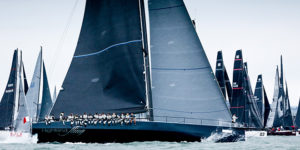 Almost winning overall was Sir Irvine Laidlaw’s Highland Fling XI. However in the end he was displaced late in the day by the JPK10.80, Yes! Highland Fling XI won the coveted Gold Roman Bowl after they took line honours for the monohulls in a time of 4hrs 19mins 44secs. 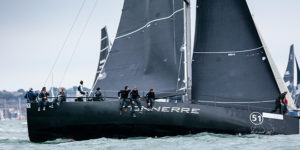 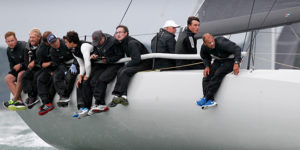 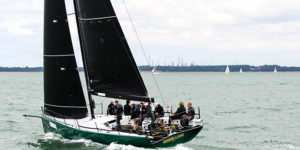 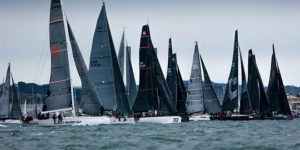 Tokoloshe is in there somewhere.
pic by Paul Wyeth

Anthony Spillebeen on Girl on Film II – a Shaun Carkeek design which was 3rd in IRC Class 0.

Here’s a report on the racing which was described as “Four seasons in one amazing day!”
The MOD70, Concise 10, a 70ft trimaran took line honours and shaved exactly a minute off the time set by Phaedo3 in 2016.

Yes!, JPK10.80, stormed round in IRC1 to take the biggest prize of the day, the coveted Gold Roman Bowl, awarded to the overall winner of the race on corrected time in IRC.

The early weather conspired to give the 1342 racers a fast start, close reaching down the Solent with the tide beneath them.

For a long time it looked as though Irvine Laidlaw’s Reichel-Pugh 82, Highland Fling XI would take the coveted Gold Roman Bowl after they took line honours for the monohulls. But, ultimately no-one could match the might of Yes! who managed to take victory by just shy of seven minutes on corrected time.