The crew and supporters of Wild Oats XI with the John H. Illingworth Challenge Cup and Rolex Timepiece.
Pic by ROLEX/Studio Borlenghi

Val Oatley described ‘Wild Oats XI’s’ line honours victory perfectly alongside the dock in Hobart this morning: “Three years of misery to this moment,” and you could not wipe the smile from her face or that of her sons, Sandy and Ian, as they waited for their super maxi to moor alongside Kings Pier.

Watching four super maxis dicing from the start of the 628 nautical mile race, Sandy Oatley commented: “I was very nervous watching the tracker last night – isn’t this a wonderful sight…”

Three years of trauma for the Wild Oats family when the yacht retired from the 2015 race with a torn main followed by Bob Oatley’s death in January 2016. Another retirement in 2016, this time with hydraulic ram issues. Then came last year’s much publicised finish when ‘Wild Oats XI’ was penalised one hour after an incident with Comanche and lost her line honours crown and a new race record to Jim Cooney’s ‘aircraft carrier’.

This year’s victory makes it a new record of nine line honours for ‘Wild Oats XI’.

Despite the finish time of one day 19 hours 7 minutes 21 seconds being well outside ‘Comanche’s’ race record of last year, nothing would wipe the smiles or tears away after ‘Oats’ had won

Perennial skipper Mark ‘Ricko’ Richards generously handed the helm over to the Late Bob Oatley’s grandson, Daniel (Ian Oatley’s son), on his third Sydney Hobart on the family yacht, before they crossed the finish line after gybing all the way up the River under Code Zero.

‘Wild Oats XI’ won the hard-fought battle between four of the five super maxis entered in the race as the four were locked in a tight fight for honours – just 4 nautical miles separating them before ‘Wild Oats XI’ came into her own.

Peter Harburg’s ‘Black Jack’ from Queensland was second over the line, followed by ‘Comanche’, after the two went gybe for gybe to the finish after rounding the Iron Pot. Christian Beck’s ‘InfoTrack finished was 4th.

Never before in the history of the race have we witnessed four yachts fight for supremacy throughout the entire race. It kept us all on tenterhooks the most exciting Sydney Hobart line honours stoush since Bob Bell’s ‘Condor of Bermuda’ beat Jack Rooklyn’s ‘Apollo’ over the finish line by seven seconds in 1982. 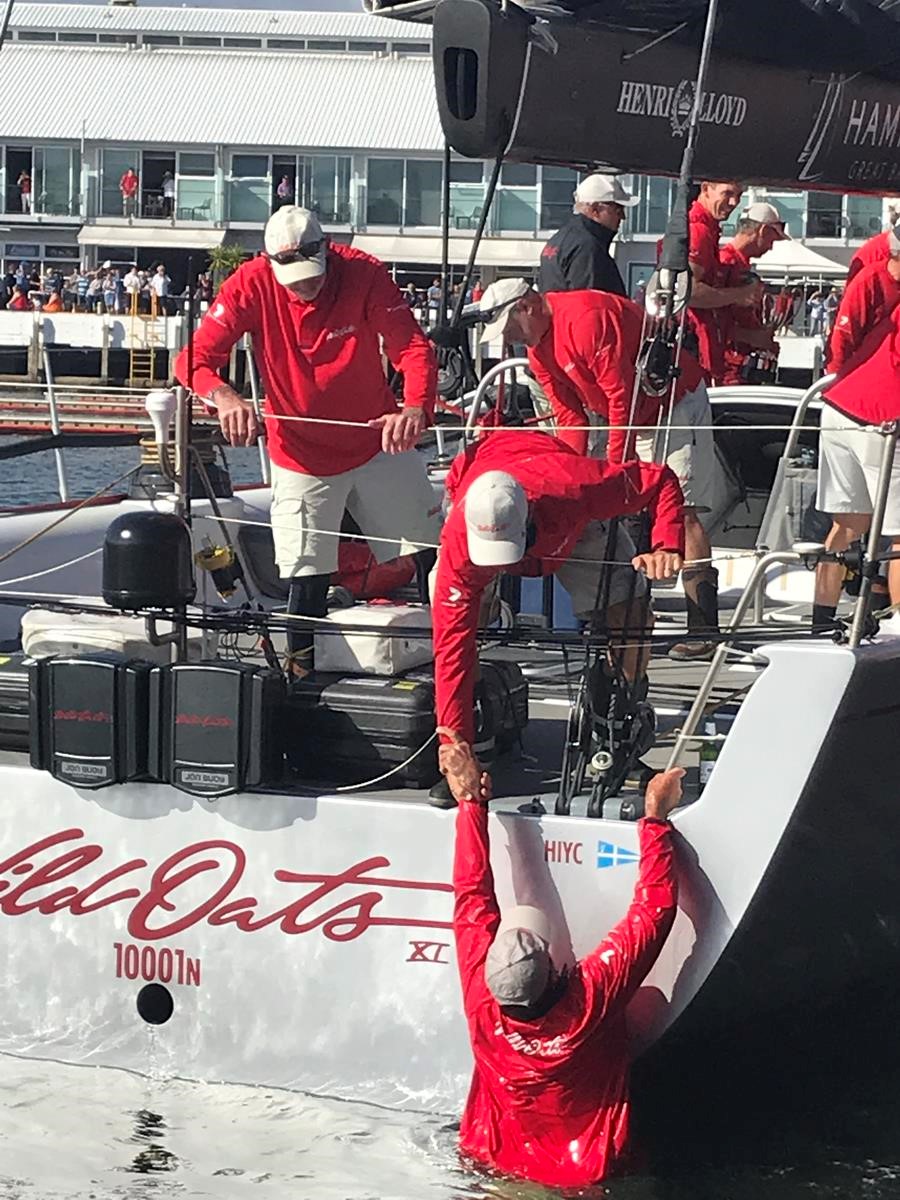 Wild Oats XI skipper Mark Richards after the traditionally ceremony of tossing the skipper into the drink!
Pic by Justine Kirkjian CYCA

As Richards screamed, he was still on the miracle, skinny super maxi yacht that he later dubbed “the Phar Lap of yachting” while around him, his crew began their celebrations for a spectacular come-from-behind win, secured in the last hour when they passed race leader, ‘Comanche’, before dawn.

After being ceremoniously thrown in the water by his crew, Richards elaborated on what the win meant to him and his crew in the aftermath of ‘Wild Oats XI’ being penalised one hour after an incident following the race start with ‘Comanche’ who were anointed line honours victors last year.

“It’s redemption for us, that’s for sure,” Richards reiterated after stepping onto the dock. “After last year’s result (which was) so disappointing.

“Today was Wild Oats’ 10th time over the line first, regardless of what anyone else says. We are so happy with the result. It was an amazing, amazing contest to the end.

“I take my hat off to all the super maxis. All teams did an awesome job. We all (the four maxis yachts) came into the Derwent together. So what more could you ask for?”

Asked how this ninth win weighs up against ‘Wild Oats XI’s’ other victories, Richards said: “This is one of the best yachting wins of my life and I’ve won a lot of races.

“This is one of the best feelings, not just for me, but for the whole team, the Oatley family. After an event like last year, to come through and redeem yourself, today is a wonderful, wonderful feeling. Money can’t buy that sort of stuff.”

Pressed on whether he and Wild Oats XI would return next year to extend their record of wins further, he said: “Don’t rip up your tickets … you ‘gotta’ give yourself something to talk about later.”

Richards also lauded the worthiness and sheer class of ‘Wild Oats XI’, especially against such a strong calibre field of super maxis yachts, of which there were five entries, but four finishers, after ‘Scallywag’ withdrew with a broken bowsprit a few hours after the Boxing Day start.

Richards praised his crew, but cited strategist, Iain Murray, navigator Juan Vila and tactician Glenn Bourke for their roles in ‘Wild Oats XI’s’ move at Tasman Light at 04h00 when she overtook ‘Comanche’.

“There is a big transition zone there with no wind,” Richards said, adding that Vila, Murray and Bourke “picked the wind really well and the guys did and awesome job. The guys basically sailed around the opposition and got us in the position where when the breeze filled in from the sou’-west we were in the right spot and off we went. That was the game- winning manoeuvre.” 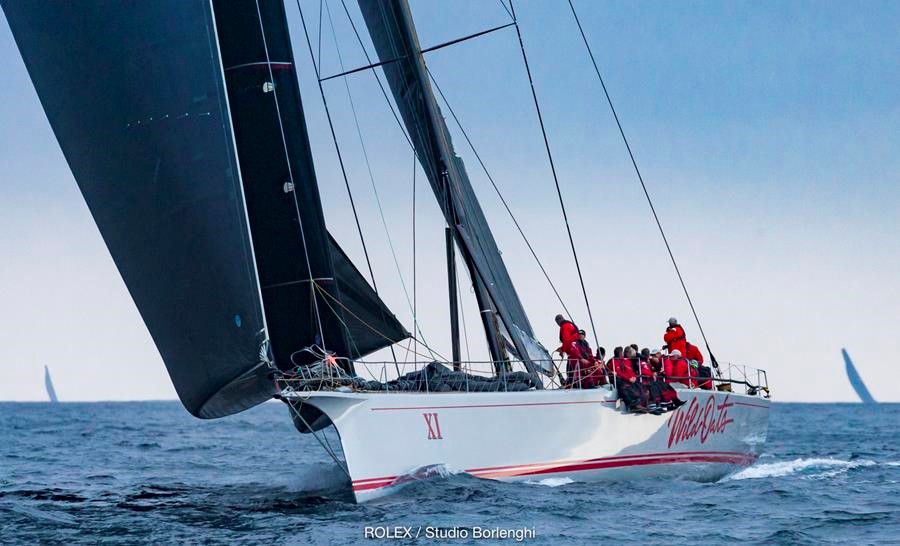 Next Wave to Deliver Encore to Nail Biting Thriller
As the 628 nautical mile race entered its third day, the race between the smaller boats was proving to be as scintillating for sailing fans.

At 13h45 on Friday, defending Tattersall Cup champion, the TP52 ‘Ichi Ban’ owned and skippered by Matt Allen, was leading overall after a thrilling snakes and ladders slide down to 32nd and up again.

Meanwhile, in fifth was ‘Wild Oats X’, the Reichel-Pugh 66 skippered by Stacey Jackson.

The battle between the two Reichel-Pugh 66-footers – ‘Alive’ and ‘Wild Oats X’ – was showing to be a nail biting one, with only one nautical mile separating them when they had 16nm left to race.

‘Wild Oats X’ is the all-professional women crewed entry on which former Foreign Affairs Minister, Julie Bishop, was on board for the Rolex Sydney Hobart start on Wednesday, after which she disembarked by jumping off as the boat passed near Bondi Beach.

Ms Bishop, who is an ambassador for the crew’s campaign for ocean sustainability, was in Hobart and boarded the yacht after the finish.