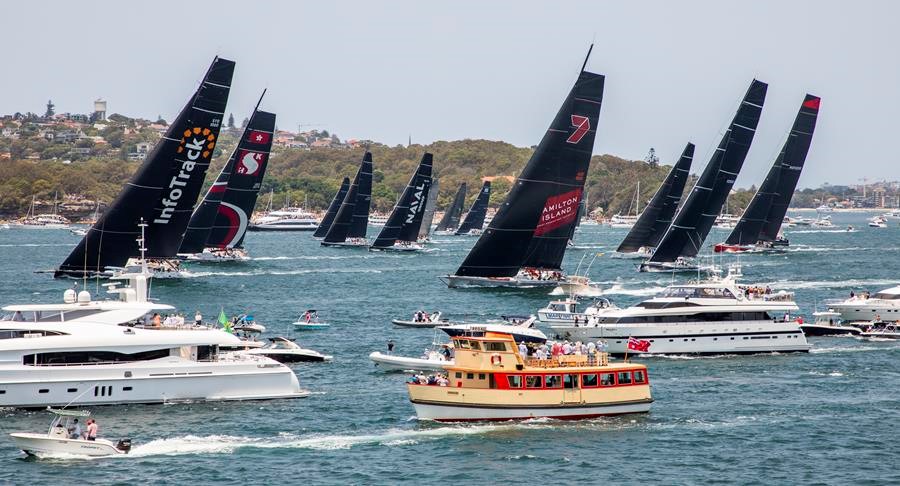 The front runners dash to be the first to exit Sydney Harbour and make a jump on the rest of the fleet.
pic by Rolex/Carlo Borlenghi

The weather forecast for the Rolex Sydney Hobart Yacht Race laid the platform for a terrific battle for line honours and overall victory in the 75th edition. The Bureau of Meteorology’s confirmed the race start on Sydney Harbour should be in a north to nor-easterly 10-15 knot wind, and that a mild southerly is due later that evening. It was also confirmed that smoke haze from bush fires was unlikely.

For front-runners, the forecast indicated that their passage south would be in relatively calm conditions. However, for the back end of the 157-strong fleet, conditions may toughen, with increasing winds and thunderstorms expected in the latter stages.

The crew of defending line-honours champion, Wild Oats XI, were understandably optimistic about their chances of recording a record 10th line-honours triumph, notwithstanding the challenge they faced to have the 100-footer repaired after sustaining mast and deck damage in the Cabbage Tree Island race last month, and then tested in a 24-hour qualifying sail last week. 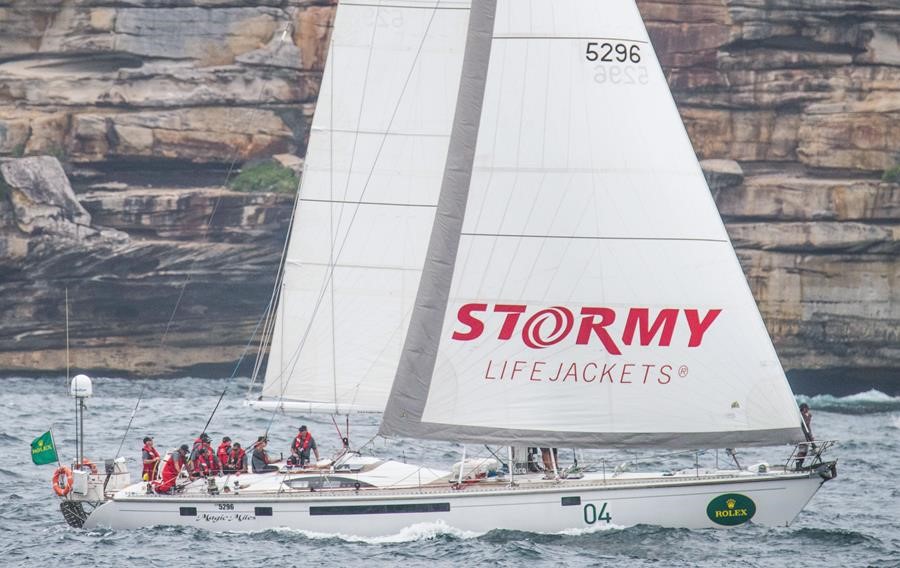 Asked if the Wild Oats XI crew has had enough preparation, Murray said: “We’ve been preparing for 15 years; same boat. It’s one of those things … Comanche is one extreme, and we are the other extreme.

“The skinny little boat likes some light breeze going downwind, and the bigger boats like to reach. So, it’s going to be a test of where we go, and how much of each one you get. I’m sure there’s going to be a bit of cat and mouse in all this.”

Comanche fought back brilliantly from a slow start by taking the lead soon after exiting Sydney Heads. The super maxi, co-owned by Jim Cooney and Samantha Grant, seemingly laboured for speed from the start compared to her four rivals, but once offshore, her downwind superiority came into play. 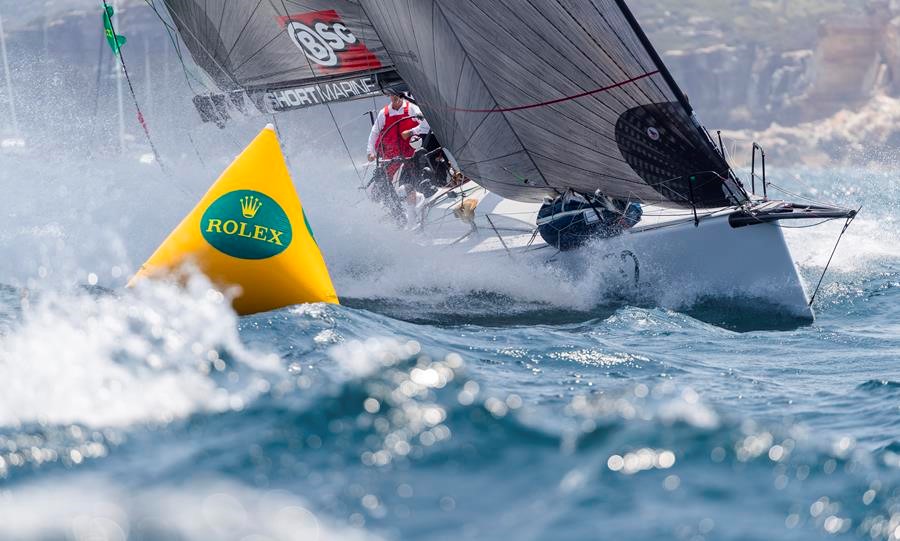 The start of the 2019 Rolex Sydney Hobart Yacht Race had plenty of challenges for big and small.
pic by ROLEX/Studio Borlenghi.

Comanche was fifth out of the heads. First was InfoTrack, and then Wild Oats XI, SHK Scallywag, and Black Jack respectively.

However, by the time Comanche was sailing abeam of Cronulla, she was the furthest out to sea and leading ahead from InfoTrack, SHK Scallywag, Black Jack and then Wild Oats XI.

The start was spectacular. The fleet of 157 set off from four lines on Sydney Harbour in a building 10-15 knot north to nor-easterly breeze and the harbour was awash with spectator boats.

The sight of award-winning Australian actor Kerry Armstrong on the 62-footer Magic Miles in this year’s Rolex Sydney Hobart left observers thinking they were seeing double.
Why? Because double is what they saw. Armstrong was joined as crew on Magic Miles with her stunt double Rese Emanuel. They will be two of eight Rolex Sydney Hobart rookies on the 14 crew, another including owner/skipper Michael Crew’s 78-year-old father Paul. 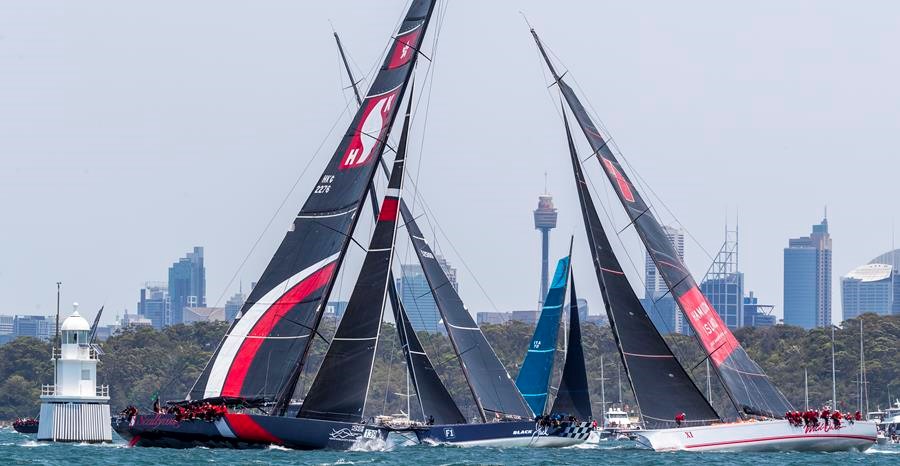 The super maxis were in close quarters off the Victorian coast in the Rolex Sydney Hobart.
pic by ROLEX Kurt Arrigo

Before the 75th Sydney Hobart, Armstrong said at the Cruising Yacht Club of Australia: “I have three beautiful boys at home. I am doing it for them and all the mums around the world.

“I am very excited to be doing my first Sydney Hobart and looking forward to it.”

After the first night at sea the super maxis were dancing a close tango in a weak southerly east of Green Cape. While Comanche was still in front of the pack, anything was possible Seng Huang Lee’s SHK Scallywag was just one mile adrift of the leader.

Behind the pair, Black Jack, InfoTrack and Wild Oats XI were only six miles astern of the leaders, with little more than 5 nautical miles between them.

As the boat speeds varied between 5.5 knots and 10 knots, the famous five were sailing well off the coast, being chased by the newest addition to the race, URM, the Reichel/Pugh 72 (formerly Shockwave), was dicing with Wild Oats XI – there was nothing between them. 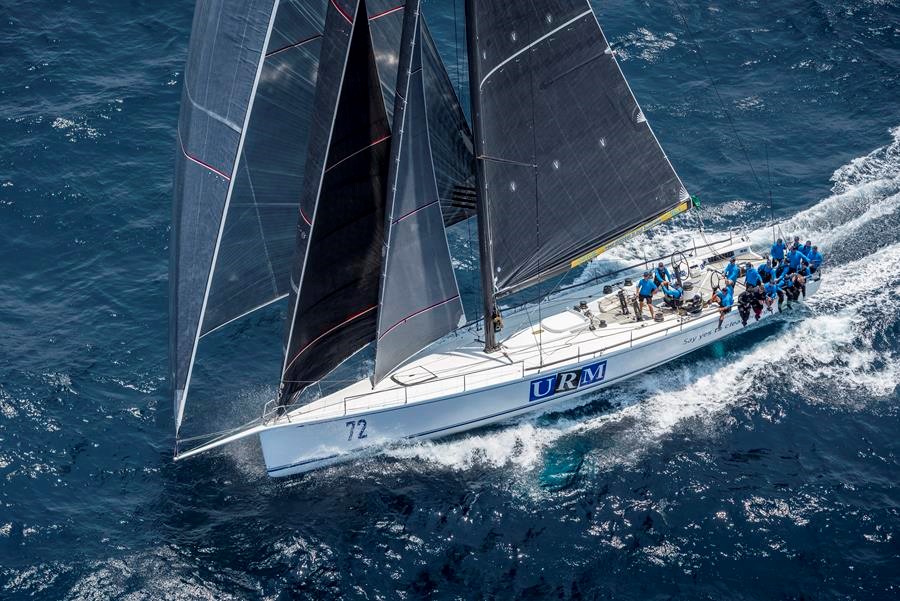 And while the tracker was indicating a finish on 29 December, this would change again as the next transition of wind came through. The Bureau of Meteorology was predicting a north to north easterly wind of 10 to 20 knots down the south coast in the morning, moving into the north-east this afternoon at 15 to 25 knots, reaching 30 knots at times. Should the prediction be correct, it would let the super maxis play their escape cards again and give Comanche her head once more.

At this early stage, the classic yachts were having their moment in the sun, with Bill Barry-Cotter’s Katwinchar leading the race for the Tattersall Cup. Barry-Cotter is not aboard, instead his brother Kendal has been left in charge of the oldest boat in the history of the race – the ketch was built in 1904. 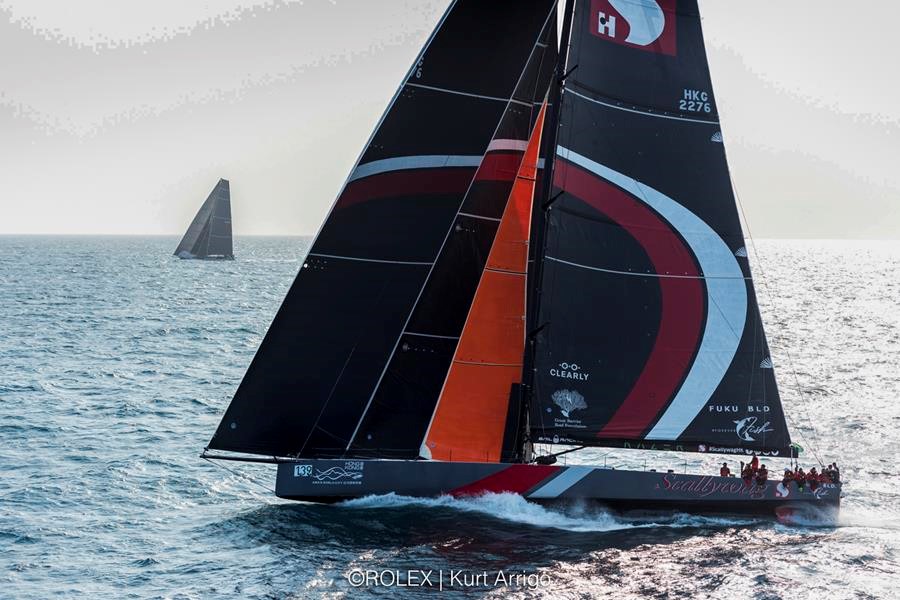 Behind her were the S&S 48, Windrose; Komatsu Azzurro ; Natelle Two and three-time race winner, Love & War.

Will Oxley reported from Ichi Ban, “All well on board. We are having close racing with Envy Scooters; the previous Ichi Ban. We’re expecting things to lighten considerably, around 19h00 tonight, but for now we are ripping.” 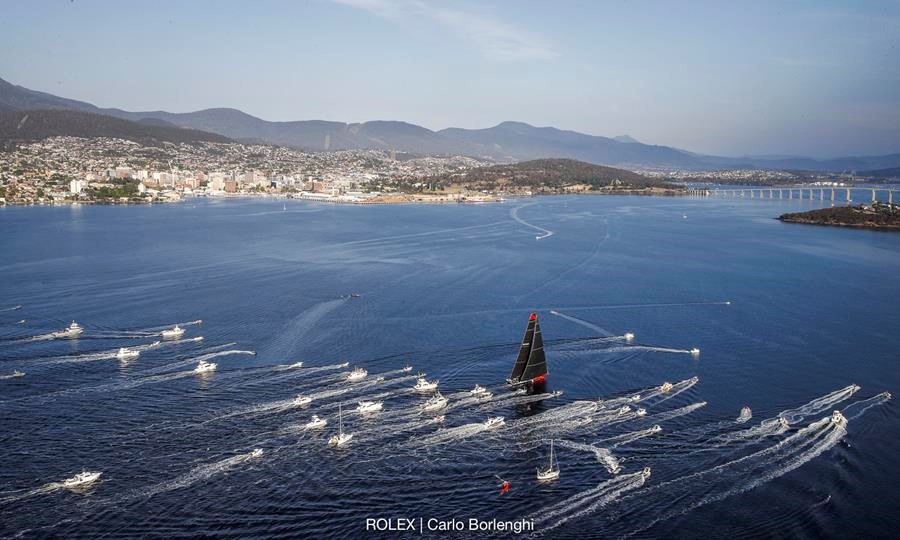 Comanche making the final dash to the Rolex Sydney Hobart finish line contending with fickle breeze ahead of the other four super maxis.
pic by Rolex/Carlo Borlengi

As the super maxis were about to begin their crossing of Bass Strait, Comanche and SHK Scallywag were in a two-way battle for the lead. Comanche had a marginal lead as there were just 14 nautical miles separating the five super maxis, which were sailing south-east of Gabo Island.

The surprise package of the race thus far was Anthony Johnston’s 72-foot URM, which was fifth in line honours and has been dogged in its challenge to Wild Oats XI. 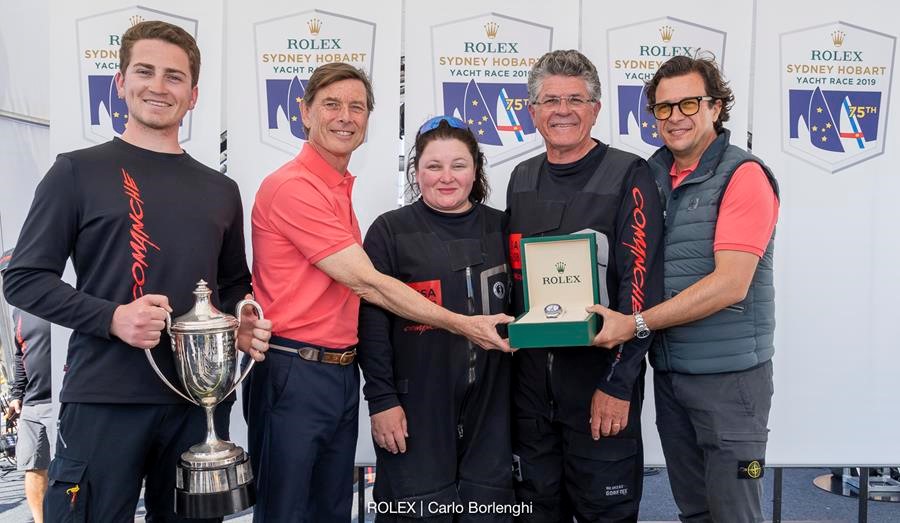 On overall standings, the first three positions were held by TP52 yachts.

In first place was Quest, ahead of Stay Calm, followed by Ichi Ban.

As the race headed towards its second night on Friday, the Anthony Johnston owned Reichel/Pugh 72 and crew of URM were the topic of conversation as they were barely spoken of when it came to who could figure in the race for line and overall honours

By 15h30 on Thursday, URM had shown itself to be a potential dark horse, sailing in company with the defending line honours champion, Wild Oats XI. She was not far behind Comanche, SHK Scallywag 100, InfoTrack and Black Jack. 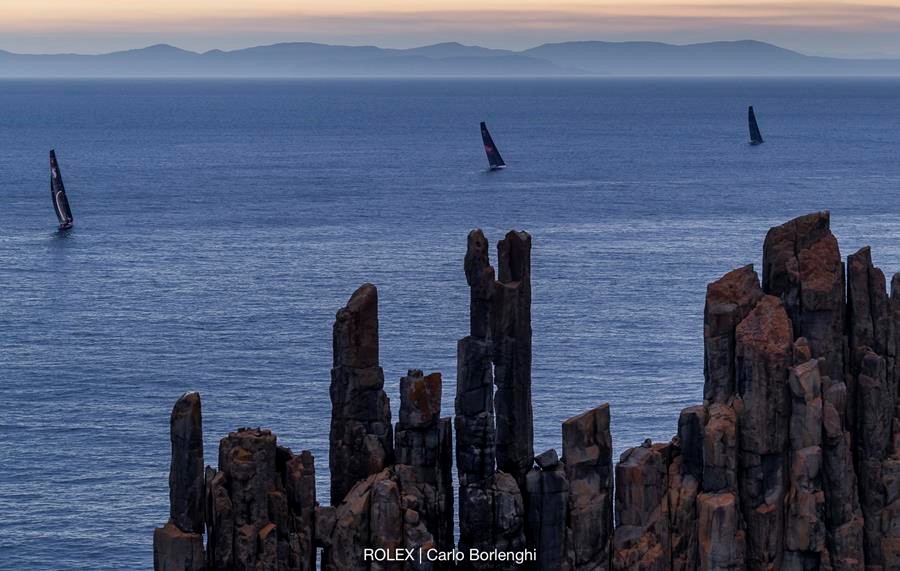 The battle between the super maxis continued until the finish line in the 2019 Rolex Sydney Hobart.
pic by ROLEX/Carlo Borlenghi

URM is the former Shockwave, and her strong showing as she ventured into the crossing of Bass Strait had been remarkable.

An edge-of-the-seat finale in the battle for line honours was a real prospect, with all five super maxis within contention as sunset fell over the fleet.

At 19h00, Comanche still led as the fleet sailed into 30 knot east-nor-easterly winds. But only 6.9 nautical miles blanketed Comanche and the next three super maxis – InfoTrack, SHK Scallywag and Black Jack respectively.

It was ultimately Comanche that made the final dash to the finish line and took the honours. 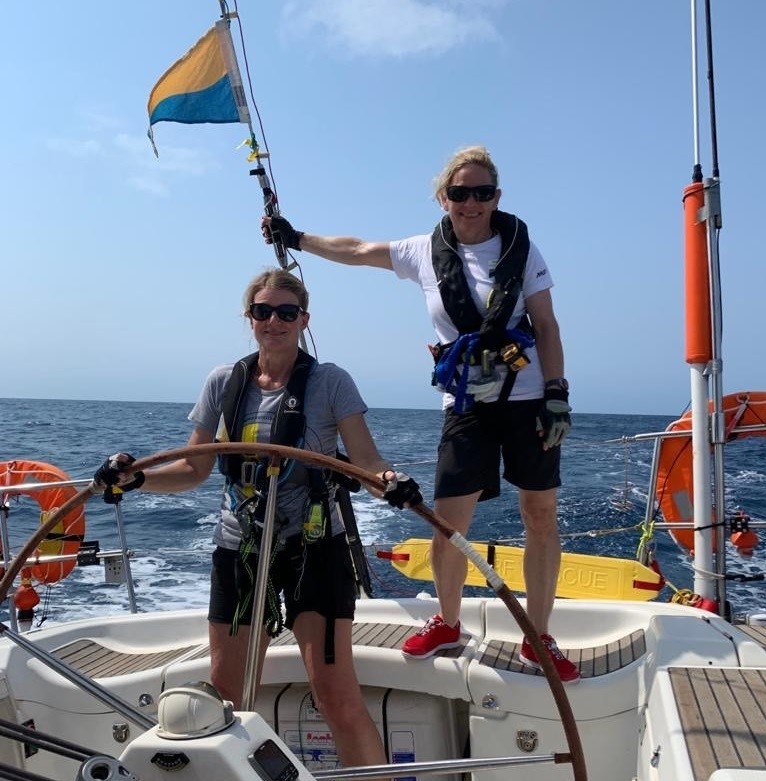 Isabel Rawlence and Chloe Tetlow enjoying their journey south on Enigma.
pic by crew of Enigma

Comanche controversially took line honours and the race record in 2017 after Wild Oats XI was penalised over a port and starboard incident with Comanche and lost both titles. This time, Jim Cooney and his wife Samantha Grant’s 100 footer took line honours cleanly from her rivals, but well outside her record of 1 day 9 hrs 15 mins 24 secs, finishing in one day 18 hours 30 minutes 24 seconds.

In the end, it came down to Comanche and Christian Beck’s InfoTrack. In the early hours of this morning, the latter trailed the leader by 20 nautical miles, but in the closing stages narrowed it to 7nms. Black Jack was another 8nms in arrears.

Comanche flew up the Derwent under full main and code zero, her boat speed still in double digits, the world her oyster. But with 3nms to go, the wind lightened off and she was struggling to move, a crew member sent up the mast to look for breeze. But back it came, and she was able to keep moving. 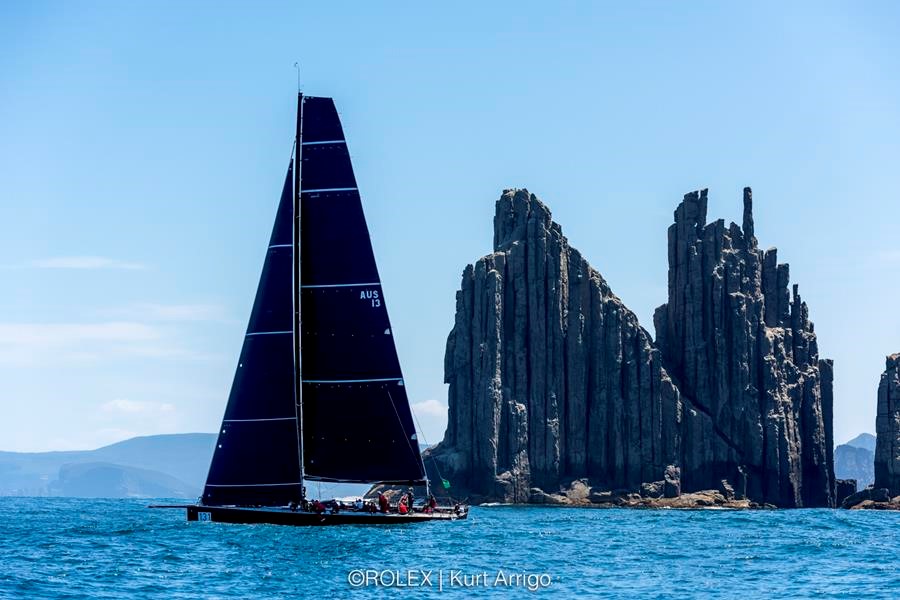 Chinese Whisper spent some time at the top of the overall leader board and tackled the fickle conditions well.
pic by ROLEX/Kurt Arrigo

Navigated by Stan Honey, with Mike Sanderson and Mitch Booth working on strategy, the well-credentialed trio took the yacht offshore yesterday while her compatriots sailed closer to the rhumbline. The move paid off, as the wind was in the east, meaning the big wide boat kept sailing fast downwind, angled for the corner of Tasmania when the predicted north-easterly returned.

The crew on Christian Beck’s InfoTrack (NSW) threw all they had at Comanche, but they could not consistently match the boat speed of the leader. 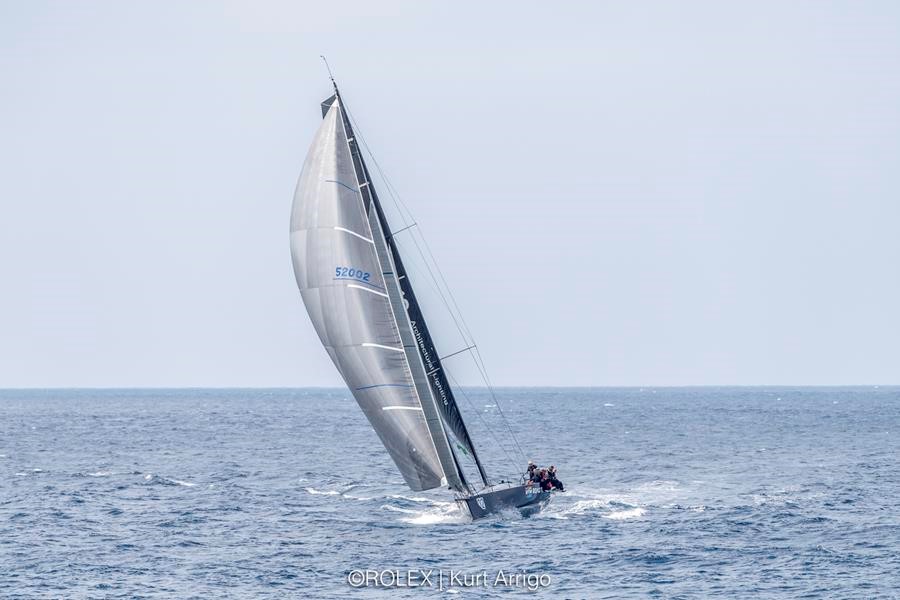 In a thriller that kept all sailing fans rivetted throughout the 628-nautical-mile race, the five super maxis sliced and diced, with all barring Wild Oats XI taking their turn at leading the fleet. 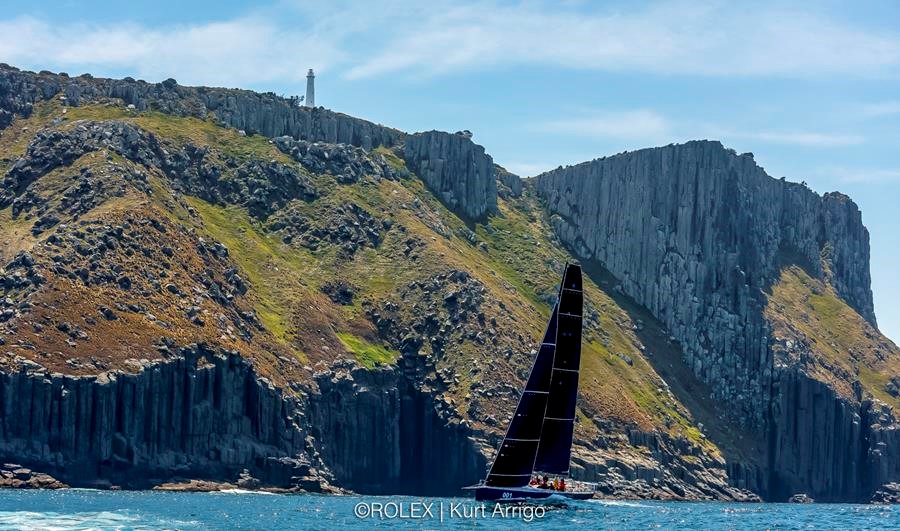 “We’ve spent so many years putting this boat together with two aims – winning the Sydney Hobart and winning the Blue Water Pointscore (BWPS),” the yachtsman said when told he had won both the race and the BWPS from Matt Donald and Chris Townsend’s Gweilo and Bob Steel and Craig Neil’s Quest – in both events. 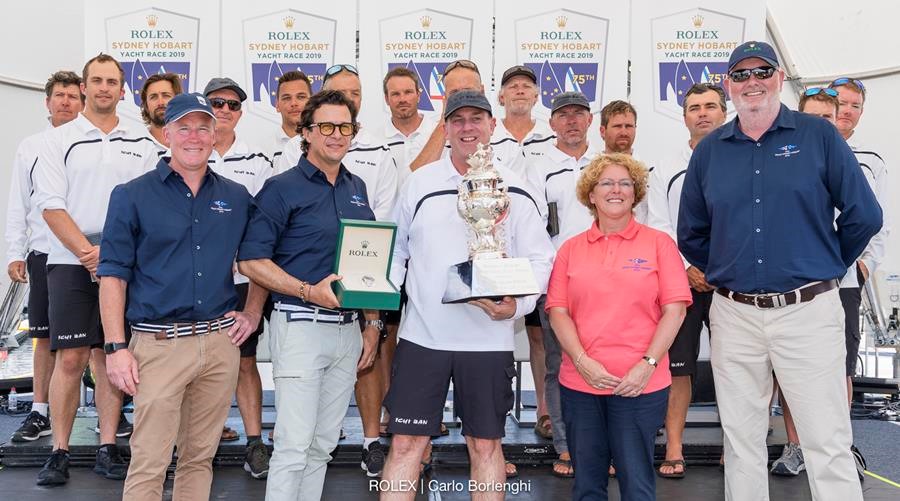 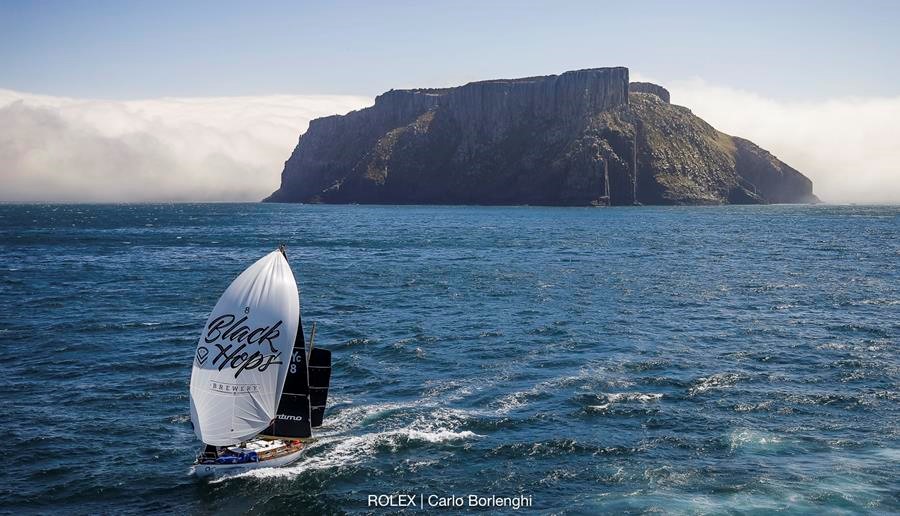 Katwinchar making her way down the Tasmanian coast.
pic by ROLEX/Carlo Borlenghi 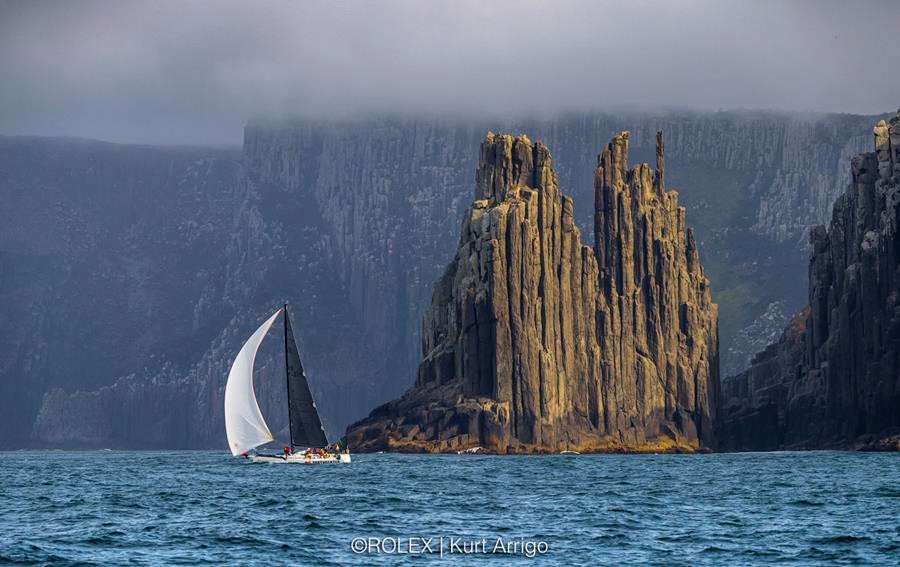