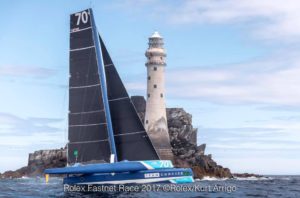 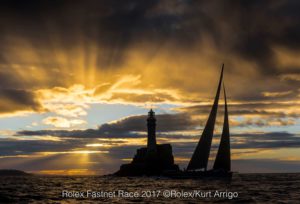 The Fastnet Rock – what a beautiful sight.
pic by Rolex/Kurt Arrigo 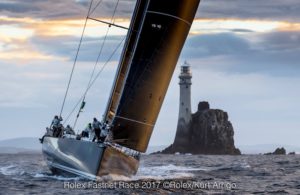 Nikita round the Fastnet Rock.
pic by Kurt Arrigo.

Concise 10 Takes Line Honours
Unchallenged, Concise 10 blazed into Plymouth as the first boat home in the 47th Rolex Fastnet Race. Tony Lawson’s MOD70 trimaran crossed the finish line off Plymouth breakwater with a race time of 42 hours and 55 minutes. This time didn’t come close to the overall multihull record for the Rolex Fastnet Race but it was still respectable considering they sailed upwind all the way to the Fastnet Rock.

Dockside at Plymouth Yacht Haven, a beaming Tony Lawson commented:
“To take the record for the Round the Island Race just a few weeks ago and then this… they deserve it, they have sailed well. Everyone thinks multihulls can’t go to weather, but we led three state of the art monohulls around the Rock by about 100 miles and we led them into Plymouth by 200 miles. So if you want to go fast you have to get yourself a multihull!”

Skipper Ned Collier Wakefield said he had enjoyed the start, leaving the Solent amid the giant spectator fleet and the journey back from the Fastnet Rock:

“Last night we gybed south and just sat there doing 30+ knots in flat water and brought that pressure all the way in. The moon was out so you could see what was going on.” As to their exceptional performance to the Rock he added that the MOD70 was sailing upwind, typically making 21 knots at 50 degrees. “The MOD70 is an amazing machine. Every time we go out we still come back smiling.”

“It was really good,” said Scott. “Upwind, it felt like a long way out to the Fastnet, although I know a lot of the fleet have still got to go through all of that. On the turn round, when we started ripping downwind, Land’s End didn’t feel that far away at all. The fastest speed I saw was 36 knots.” But fairly pedestrian compared to the 40+ knot speeds he was seeing during the America’s Cup in Bermuda? “Not at night in a seaway! These boats are awesome – get the boards set up right and they just fly. They are amazing bits of kit.”

At the time Concise 10 finished, the first monohull, George David’s Rambler 88, still had 224nm to go to the finish.

Rambler 88 Claims Monohull Line Honours
American George David’s Rambler 88 arrived in Plymouth to claim monohull line honours with a time of 2 days 9 hours 34 minutes and 21 seconds. This was more than six hours faster than they had managed in 2015 when they ghosted in just four minutes astern of Jim Clark’s 100ft maxi, Comanche. But it was considerably outside of the monohull race record of 1 day 18 hours and 39 minutes, set in 2011 by the Ian Walker-skippered VO70, Abu Dhabi Ocean Racing.

“This was our fourth (Fastnet) race,” said George David upon his arrival in Plymouth Yacht Haven. “We have had two that were fairly windy and one with no wind, two years ago, and this one with decent wind but a tough windward-leeward course. 360 miles upwind is a challenge and it is cold, but it is okay. We sailed well and we did a good race. We’ll see what happens.”

For a lengthy period this morning Rambler 88 appeared set to achieve ‘the double’ ie win both line honours and overall on handicap. However she has since been displaced from the top spot overall under IRC by the 115ft giant, Nikata and Ron O’Hanley’s Cookson 50 Privateer. “You can always hope, but you can never tell, especially when you have boats out there for three or four more days and the weather may change and tomorrow it’ll blow harder and they’ll come up behind us,” observed David.

In 2011, the Rolex Fastnet Race nearly claimed David’s life when the keel broke off his 100ft maxi, causing the boat to capsize shortly after rounding the Fastnet rock. David and four others were washed away from their boat and it was only thanks to a near miraculous set of circumstances that they were rescued shortly before dusk. Passing the same area this time David said they had touched base with the Irish rescue services who had saved them six years ago.

“We called the Valentia MSRC, the search and rescue unit for Ireland and had a talk to them on the radio and the Baltimore RNLI. They knew we were there from looking on the tracker. We know those people very well having met them in the dire-est of circumstances. They are wonderful people and it was nice to connect with them.”

Aside from the full upwind slog from the start to the Fastnet, there had been a few occasions when the race hadn’t gone their way. As David said: “We sailed into a lull on the way up to Ireland. People behind us could see us do that and went the other way. Then coming up the Channel, we went through two squalls with low to no wind, just heavy rain and we didn’t move very fast in those.” However the park-ups were no way as severe as they had been in 2015.

For David the Rolex Fastnet Race remains a favourite. “We have done four since 2007, and that qualifies it as a favourite race, but next time would you please make it warmer!”

As usual Rambler 88 was bristling with America’s Cup and Volvo Ocean Race winners, including many former Team New Zealand and Alinghi crew. A new recruit this time was former Emirates Team New Zealand helmsman Dean Barker, who sailed as watch leader. Although best known for his inshore racing, this is Barker’s third Rolex Fastnet Race having previously competed on a Mumm 36 and aboard Hasso Plattner’s maxi Morning Glory in 2001.

Barker said that their hopes of securing ‘the double’ were quashed on the run back from the Scillies. “We felt it slipped away there. We hit a couple of rain squalls and the breeze completely shut down and we got parked up with lightning and all sorts. You know that the others are gobbling up that time.” However he enjoyed racing on the powerful maxi. “It maintains really high speed and is really nice to sail. It definitely loads up and you can achieve some high average speeds. Downwind as long as there is some breeze it goes well, because you sail pressed up all the time. As soon as you get down to 8-9 knots it does suffer. And there’s a great bunch of guys on board.”

Rambler 88’s navigator Andrew Cape felt this had been a ‘classic’ Fastnet Race with the largely westerly conditions. Aside from the hurdles mentioned they also lost out to the boats behind which benefited from a major right shift allowing them to lay the Fastnet Rock as they crossed the Celtic Sea. “The shift wasn’t there for us. We lost about 12 miles there.” 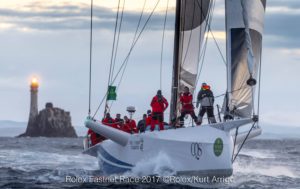 Ludde Ingvall & CQS Second Across the Line
Ludde Ingvall’s super maxi CQS crossed the finishing line as the second placed monohull on line honours behind the American boat Rambler 88. Their elapsed time for the course was 2 days, 14 hours, 28 minutes and 25 seconds.

On the dockside the skipper said they were lucky to have been able to finish, having suffered damage to one of their foils early in the race. “As we were passing the Needles the top of the canard started to break up,” he admitted, “we have been nursing it all the way around the course.

“I was convinced we wouldn’t get past Portland Bill, but Chris Dickson and the team were determined to keep going, and did a great job of getting us here.”

In the later stages of the race, when they weren’t going to windward, and were not hampered by the damaged foil, the boat achieved good speeds, making very good time from the Lizard Point to the finish.

Sir Michael Hintze, the sponsor, for whom this is only his third ocean race, said the most enjoyable thing for him was seeing the team work and the expertise of the crew. “These guys are the best, their professionalism is impressive and they really work as a great team.”

They managed to hold off serious threats from the 115 foot British boat Nikata, and the very impressive SMA, the French IMOCA 60.

This was Ludde’s eighth Rolex Fastnet Race, having won the race on line honours and handicap in 2001.