Reminiscences of Sandefjord and Dante Deo 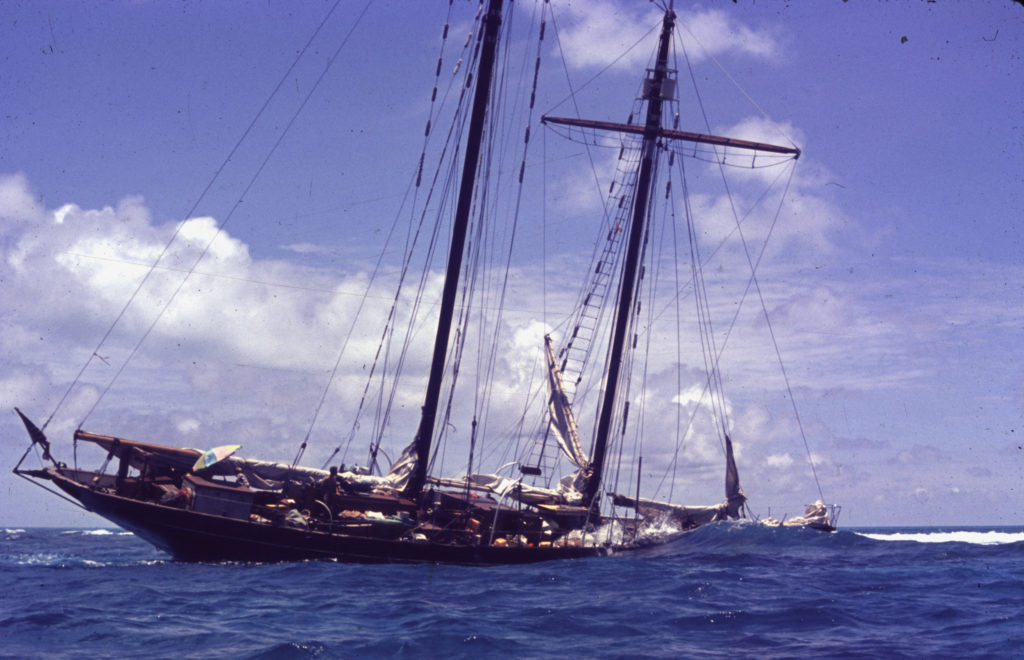 On the Internet I recently came across reminiscences by Jack Hargraves regarding his having sailed in company with both the schooner ‘Dante Deo’ and the Colin Archer ketch ‘Sandefjord’.

His story began with his arrival in Durban, in December 1964, aboard ‘Tuarangi’. It was there that he met the crew of ‘Sandefjord’ who were preparing for their upcoming circumnavigation. Later, on the recommendation of the ‘Sandefjord’ crew, Jack was offered the job of skipper on ‘Dante Deo’ which was lying in Panama. He described the voyage to French Polynesia in company with ‘Sandefjord’ and ‘New Endeavor’ and ended with his parting with the ‘Sandefjord’ crew in Tahiti. 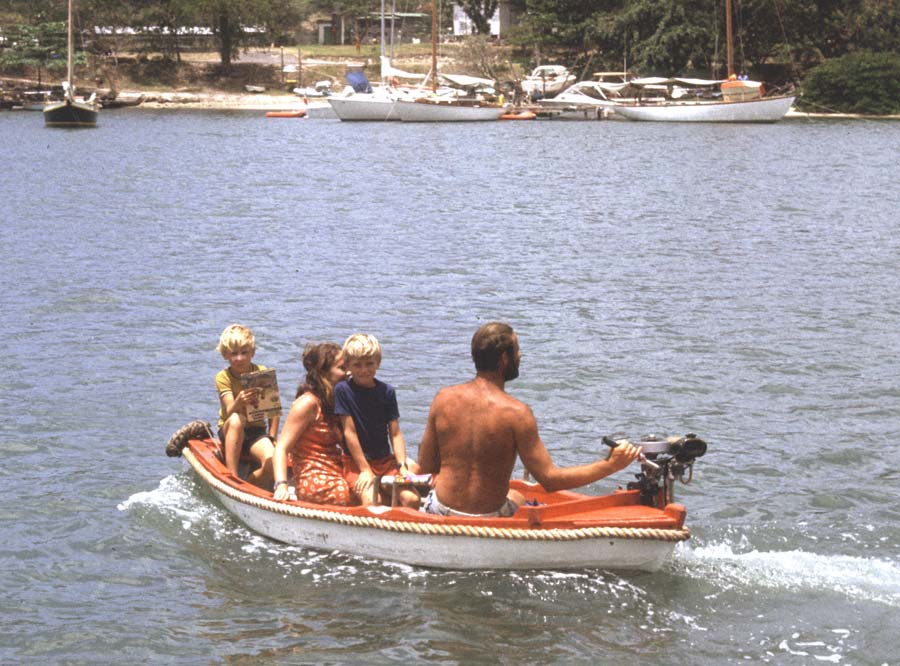 My story picks up nearly where Jack Hargraves left off.

In February 1965, I joined the English flagged, thirty-five foot Piver designed trimaran, ‘Cygnus A’, in Antigua upon its arrival from Europe. Along with the owner, Venkatmaran Radhakrishnan and David Morris, both radio astronomers, I sailed on to Sydney, Australia, where we arrived on Christmas Eve, 1965. I lived and worked in Sydney for a bit more than one year. One Saturday morning, several months after I arrived, I was at the Cruising Yacht Club, on Rushcutters Bay, when ‘Sandefjord’ limped in, with a broken mizzen mast, after their fifty-plus day voyage from Bora Bora. I took their lines and treated the crew to a much appreciated lunch at the club. That was the beginning of a great friendship with the crew and many weeks of hard partying in Sydney while they made a new mizzen mast and affected other repairs to ‘Sande’. 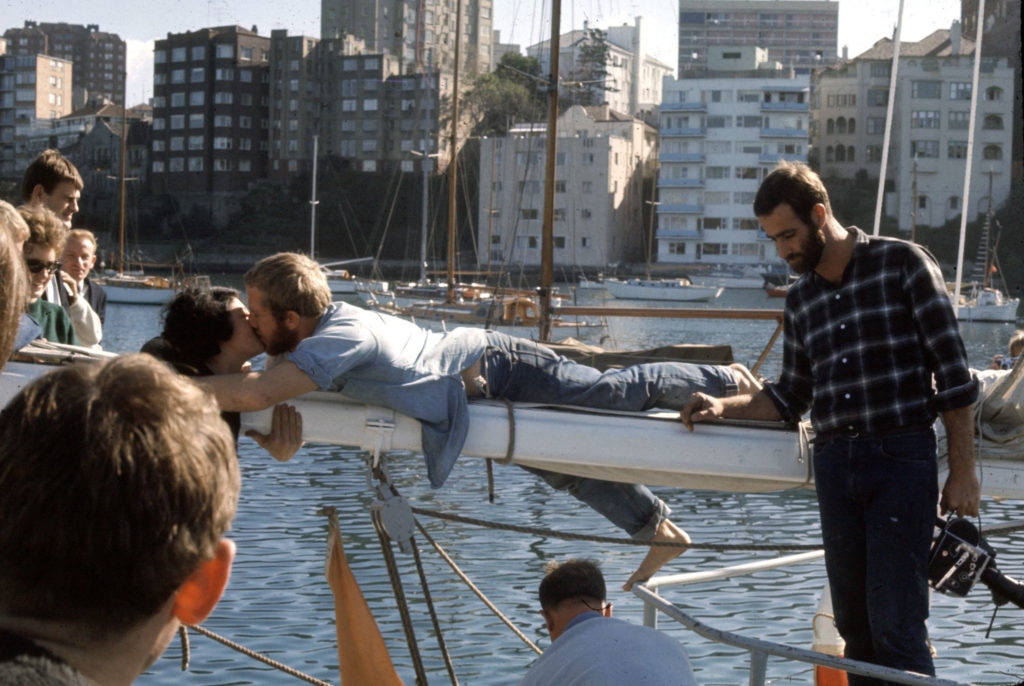 Although ‘Dante Deo’ did not come south of the Queensland coast, a number of the crew did come to Sydney where I met them. When I was ready to depart Australia, in February 1967, I made contact with ‘Dante Deo’ via ham radio and arranged to meet the boat in Bali. From Bali, we sailed through Indonesia and on to Singapore. After a road trip from Singapore to Bangkok and back, with ‘Dante Deo’s’ owner Tom Kurth and Rod Ivison, the boat’s Australian engineer, we pushed on for Hong Kong. 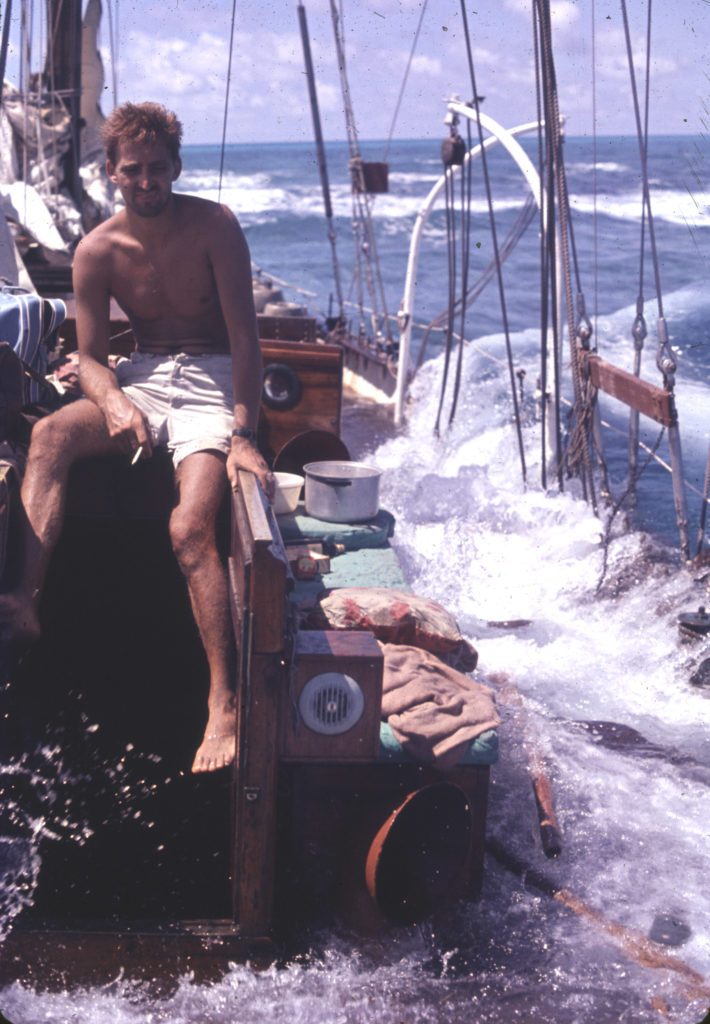 Ed Johnson aboard Dante Deo with her decks being washed by waves.

All of us were anxious to do more scuba diving before we left tropical waters. So we set our course for the Paracel Islands, a group of uninhabited islands, off Vietnam, the ownership of which were disputed among Vietnam, China and the Philippines and some of which the Chinese have recently enlarged and fortified as military bases. We had planned to arrive at Bombay Reef, a submerged coral atoll, in daylight but, because of a navigational error in calculating the set of the current, we arrived in the dark of night at 04h00. ‘Dante Deo’ had a draft of 14 feet, and her keel wedged tightly into the coral. All attempts at backing off and at kedging off using anchors failed. 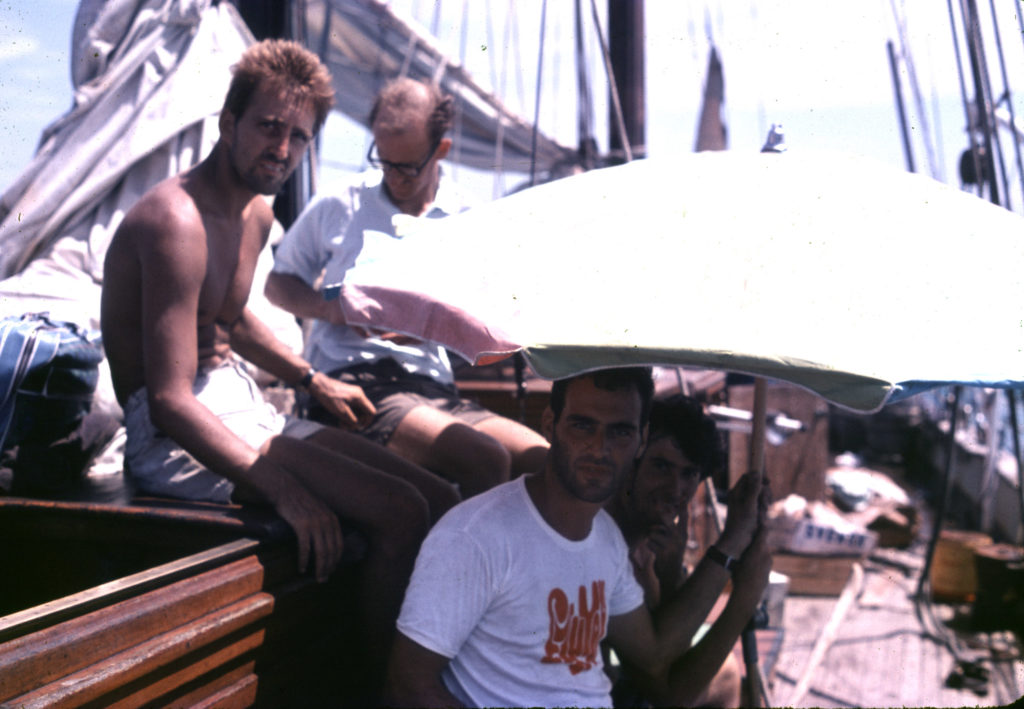 The crew of Dante Deo awaiting rescue after grounding in May 1967.

We were geographically fortunate in that we were less than 300 miles off the South Vietnamese coast with its huge concentration of U.S. military assets. Using the on-board ham radio we made contact with a U.S. Air Force operator in Germany who, in turn, relayed our distress call to the Pacific. At daybreak, we were circled by a Navy patrol plane and later in the morning an Air Force plane dropped two life rafts. With the radio contained in one of these rafts, we were able to communicate with the aircraft and to learn that the Navy had dispatched a mine sweeper to assist us. We later learned that an Air Force seaplane had also been sent to pick us up. This plane landed in the calm waters of the atoll and successfully rescued us before sunset.

The crew of 7, including Tom Kurth’s seven year old son, Scooter, were flown to the airbase at Da Nang, and then on to Clark Air Force Base in the Philippines, where we parted company. 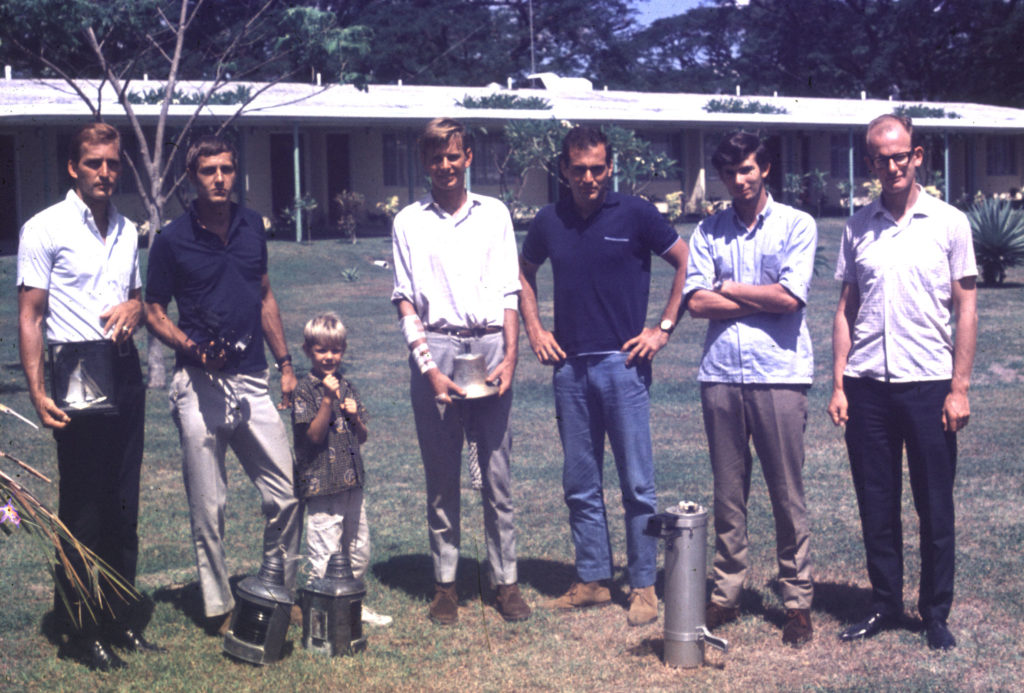 The crew of Dante Deo at Clark AFB, Phillippines, May 1967.

From there, I flew on to Hong Kong with a young Englishman who had joined the crew in Singapore and whose family lived in Hong Kong. In Hong Kong I met the 50 foot, US flagged ketch, ‘Phoenix’. It was crewed by American Quaker pacifists and had just returned from a voyage taking medical supplies to North Vietnam. As most of the crew had departed in Hong Kong to return to jobs in the States, the owner, Earl Reynolds, was happy to have me join him and the remaining crew for the voyage back to ‘Phoenix’s’ home port of Hiroshima, Japan. After touring Japan for several weeks, I signed on as crew on a U.S. merchant ship, the ‘Robin Kirk’, for the voyage back to New York.

Back in the States, and much to my parents’ delight, I settled down and took a normal engineering job. In 1969, I married Rebecca who, being jealous of my sailing adventures, suggested that we buy a boat and take off for the Caribbean, which we did in the autumn of 1971.

In early 1972, in a harbor on the island of Saint Vincent, I reconnected with ‘Sandefjord’, now crewed by Patrick Cullen, his wife Ruth and their two young sons Sean and Peter. A year earlier, Patrick and his family had sailed the boat in the Cape Town to Rio race (placing a solid last) and then worked their way up to the Caribbean. For the next several months Rebecca and I, on our 33 foot, New Zealand built, ferro-cement ketch, ‘Korora’, and ‘Sandefjord’ sailed in company throughout the Caribbean and up the East Coast of the United States to the Mystic Seaport Museum in Connecticut. In the autumn of 1972, Rebecca and I returned to Chesapeake Bay and again settled down to start our family.

‘Sandefjord’ remained in Mystic, Connecticut until 1976 when Pat and Barry sold her to a Norwegian who then sailed her back to her birthplace, Risor Norway, where she remains to this day, a grand dame of 106. 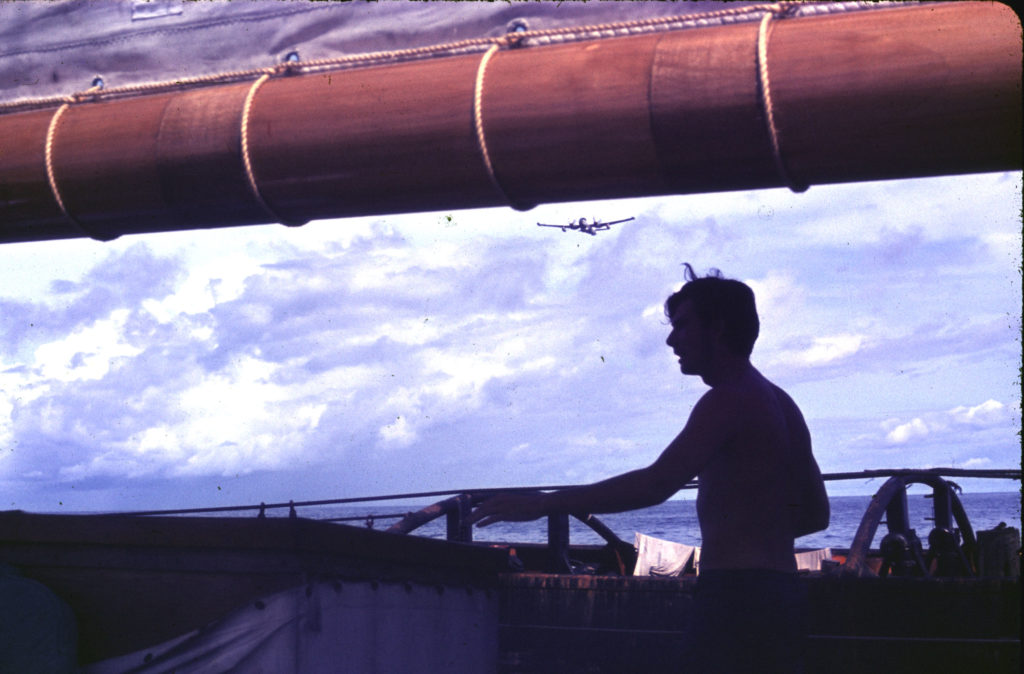 Rod Ivison being buzzed by a Navy patrol plane while aboard Dante Deo in May 1967. 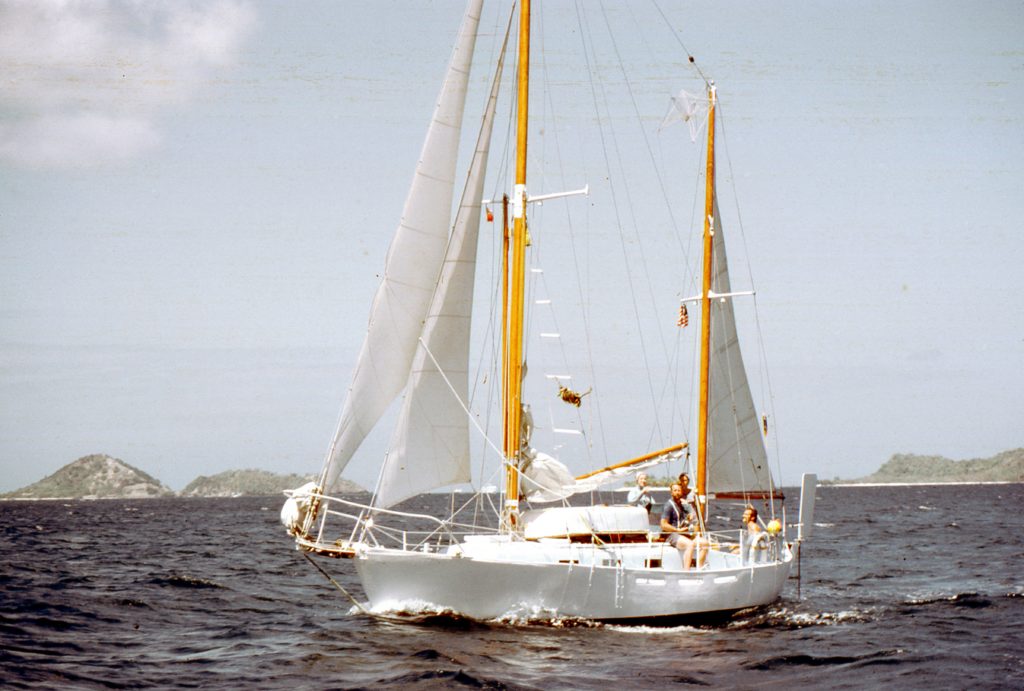 The ketch Korora while cruising in the Virgin Islands in 1972. 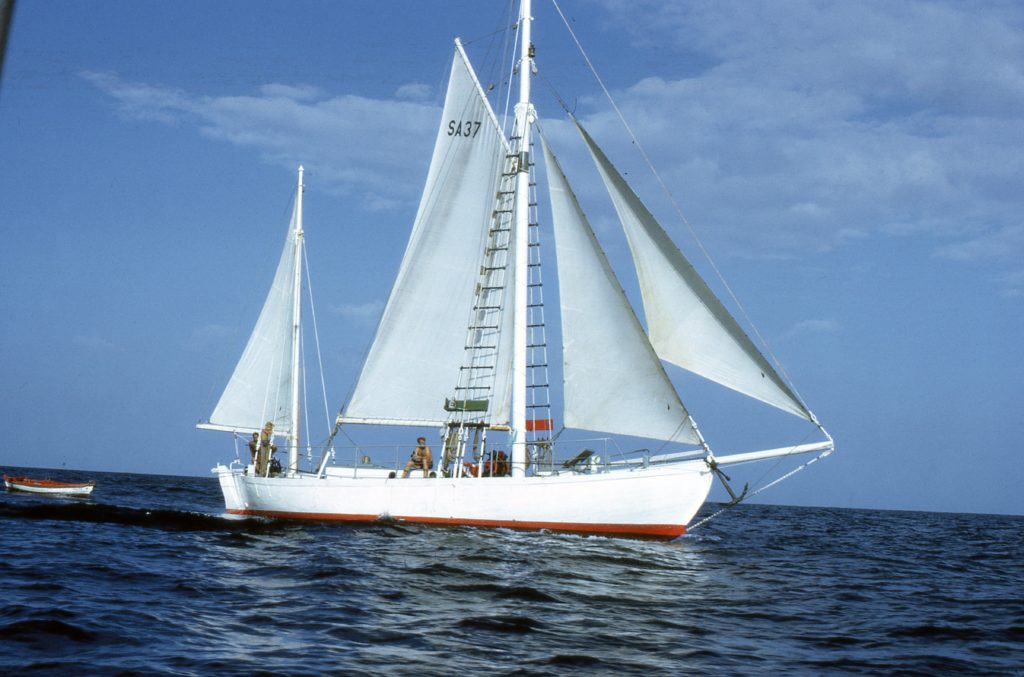 Sandefjord in US Virgin Islands in 1972. 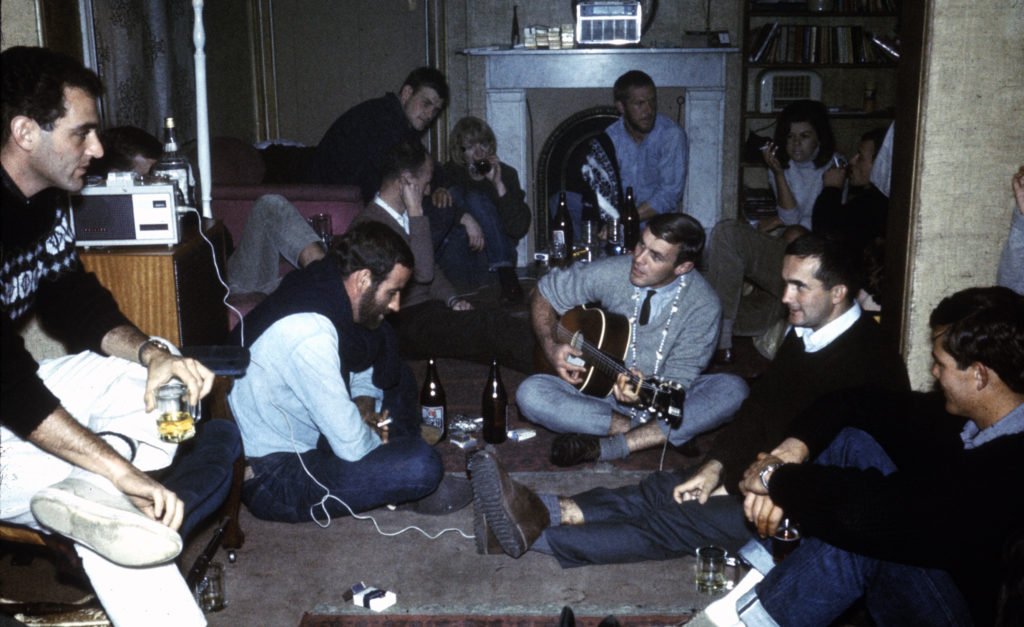 The Sandefjord crew and friends partying in Sydney. 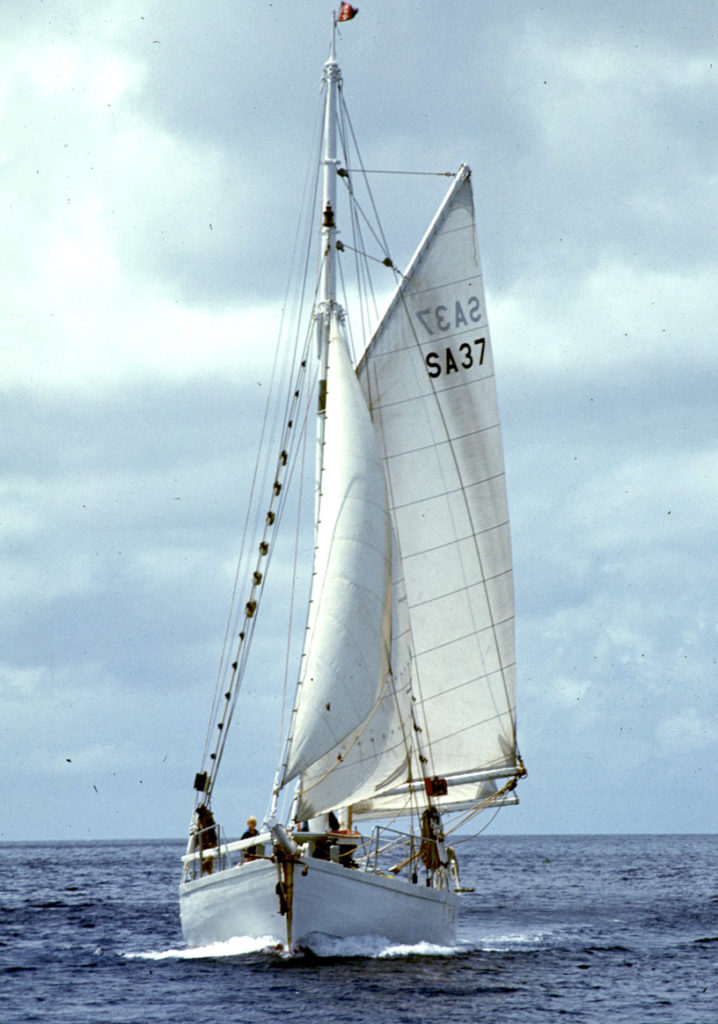 Sandefjord in the Caribbean in 1972. 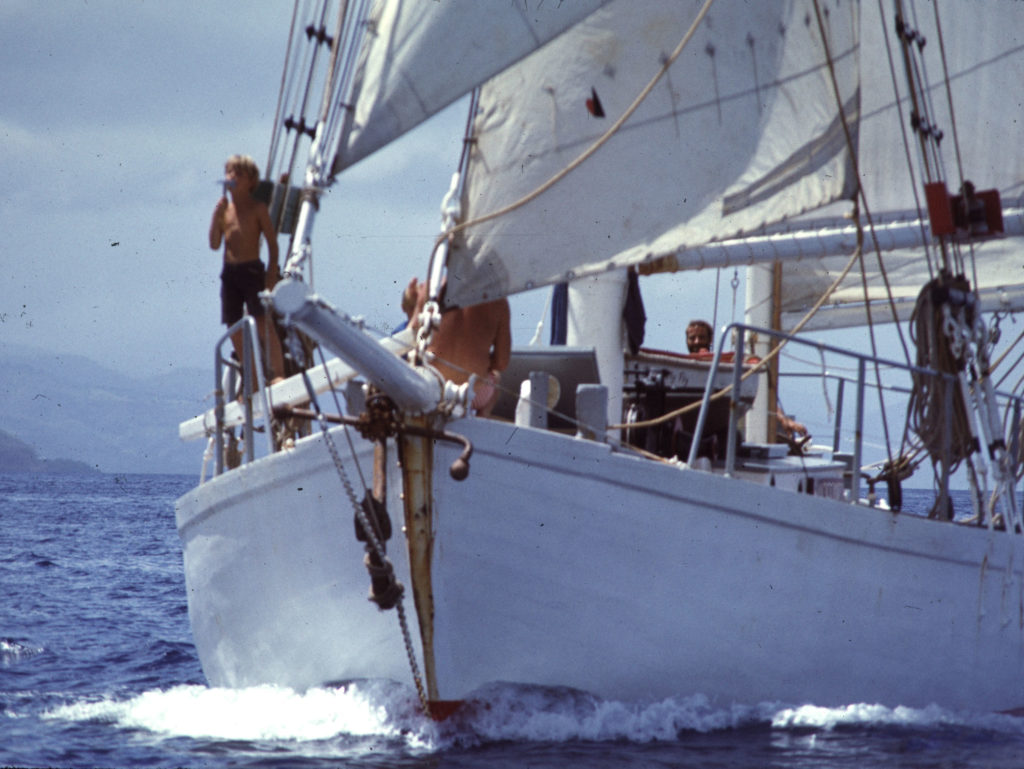 Sandefjord sailing in the Grenadines in 1972. 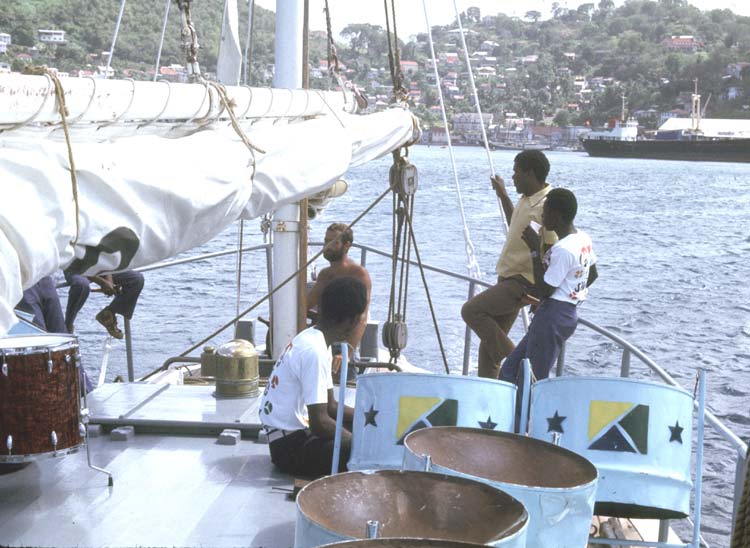 Pat Cullen and a steel drum band aboard Sandefjord in Grenada.