PYC Sailors off to the Netherlands 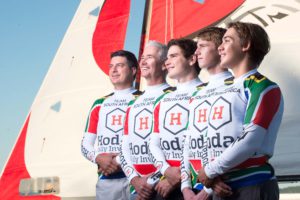 Point Yacht Club’s Hobie sailors Peter Hall, Garth Loudon, Jethro Brophy Tintinger, James Butler and Dylan Albert will be heading off to the Netherlands to participate in the Hobie Multiworlds and Europeans 2017 in July.
pic by Val Adamson

Half a dozen Hobie sailors from Point Yacht Club will soon be packing their kit bags and heading over to Noordwijk in the Netherlands to compete in the Hobie Multiworlds and Europeans 2017 in July.

The ten day regatta will have over 250 entries from 24 countries competing in eight multihull classes. The highly competitive and colourful event will be sailed on the North Sea, offshore of Noordwijk with the Hobie 14s and Hobie Wild Cats racing in the Multiworlds 2017 and the Hobie 16 Open Class; Hobie 16 Spinnaker; Hobie 16 Youth Spinnaker; Hobie Dragoon and Hobie FX One competing in the Europeans 2017.

Leading the PYC contingent is Garth Loudon. Loudon’s sailing career spans four decades having first competed in the 1984 Hobie 16 Worlds at Fort Walton, Florida in the USA. He has had a hugely successful resurgent sailing season raking in the titles both locally and nationally. His best achievements in a decorated international career are sixth in both the 1993 and 1996 Hobie 16 Worlds, a first in the Tanzacat 2016 and a first in the European Grand Masters 2016.

The dashing sailing is in peak condition ahead of a demanding few months, spending time mountain biking, gyming, kiteboarding and of course spending as much time as he can on his catamaran. All of the hard work seems to be paying off, Loudon and his Hobie 16 partner Robbie Eduoard-Betsy will be jetting off to Germany as the sole team representing the country in August with an invite to the prestigious Hobie World Cat. Only nine teams have been invited in this event.

Loudon, together with Peter Hall will be racing in the Hobie 14 class that is part of the Hobie World Championships. Hall has been charging at the front of the fleet for just over a decade and recently won the 2017 Hobie 14 KZN Provincials. This will be his first ever international regatta, but he isn’t unfamiliar with jostling international sailors having sailed in Boston a number of times on the bigger keelboats.

At the European regatta, father and son duo, Justin and James Butler will be part of the foursome who will be racing in the Hobie 16 open class. James (15) pairs up with Dylan Albert (16). The two have both been sailing for roughly five years but this is their first time travelling to compete against an international fleet in both the Hobie 16 Open Class and Hobie 16 Youth Spinnaker classes. Dad Justin who has heaps of experience sailing offshore, will be joining Cape Town’s Nic Ryall. Jethro Brophy Tintinger (17) will be crewing for Dutch sailor Stan Jaco Gerd van der Lans, a local sailor from the area in the Netherlands.

With a fair bit of international experience, Brophy Tintinger has competed in a few worlds, including the Tera Worlds, and the Topper Worlds. The Welsh hosted Topper World being the most recent where he placed second in the silver fleet.

The eager Hobie guys are getting as much water time as possible in preparation for the massive international regatta, with all of them taking to the warm waters offshore of Durban for the Hobie 14 Nationals hosted by Point Yacht Club. The local event launches from the beach site with the Flying Fifteen and Laser Regionals sharing the race track from Youth Day, 16 June.