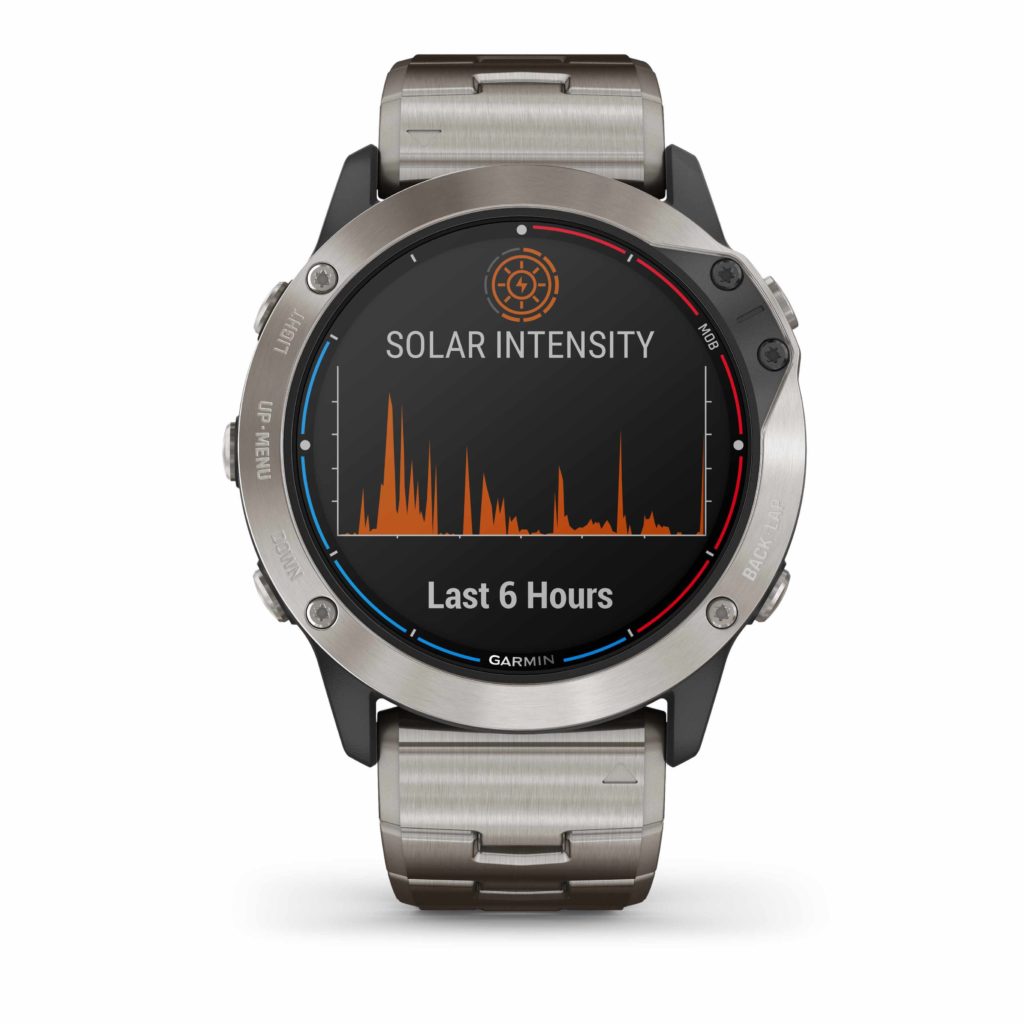 Solar – the Feature You Didn’t Know You Needed!

For as long as I’ve owned smart watches, one of my main gripes is that I need to charge them fairly often. When Garmin announced their line of Solar watches, I thought it was cool, but possibly a bit gimmicky. I was wrong…

I spent 3 weeks continually driving the Garmin Quatix 6x Solar. For the week before, I used the Garmin 6 (same features, but no solar option). Being a nerd, I generally use and play with all the features and sensors. This often has a detrimental effect on battery life, but I figure that what’s the point of having them if you switch them off?

The non-solar variant was great, as expected, but after a week of use the battery was ready to be charged. Not surprising – this is what I was expecting after tracking 4-hour long activities that week, using Garmin Pay, and measuring various body metrics with the sensors.

After boxing it back up and switching to the newly arrived 6X Solar I had on test, I was interested to see how long it would be before I needed to charge it, as I was a bit dubious about the solar panel.

The first thing I noticed when I pulled it out the box was how unbelievably light in weight it was. It comes with a titanium band, so I guess this is to be expected; but it looks like it should be much heavier than it is! In the box you also get normal silicon bands, which are probably better suited for use when sailing. Garmin still use their quick-connect feature, so switching out bands takes seconds.

It’s worth noting that the ‘X’ variant is big. The housing is 51mm in diameter. I personally love the big size, but I have big wrists. People with smaller wrists would do well to go play with one before buying, as the size could be a bit off-putting (there is a smaller variant, but unfortunately this doesn’t have the solar panel).

After turning the unit on, it was surprisingly easy to set up and connect to my phone. Garmin has put in a great amount of effort to make this process as seamless as possible. The walkthrough helps you make sure all the features are set up and working properly, so you really can get full use out of your new purchase immediately.

I’m in love with Garmin Pay, which the wizard helps you set up. Using Garmin Pay has been excellent for me. I’ve linked my credit card, and can now pay with my credit card, via the watch, on any tap-to-pay credit card machine. You do not need to have your phone with you. This is massively convenient, as I often find myself buying a post workout smoothie, or stopping at the shop after gym without my wallet. (Note not all banks support Garmin Pay – to check if yours does, head here: https://www.garmin.com/en-ZA/garminpay/banks/

After set-up, it was easy to adjust the size of the titanium band using the screw driver which was included. This is a great feature, as needing to go to a jeweller to get this done is a pain. 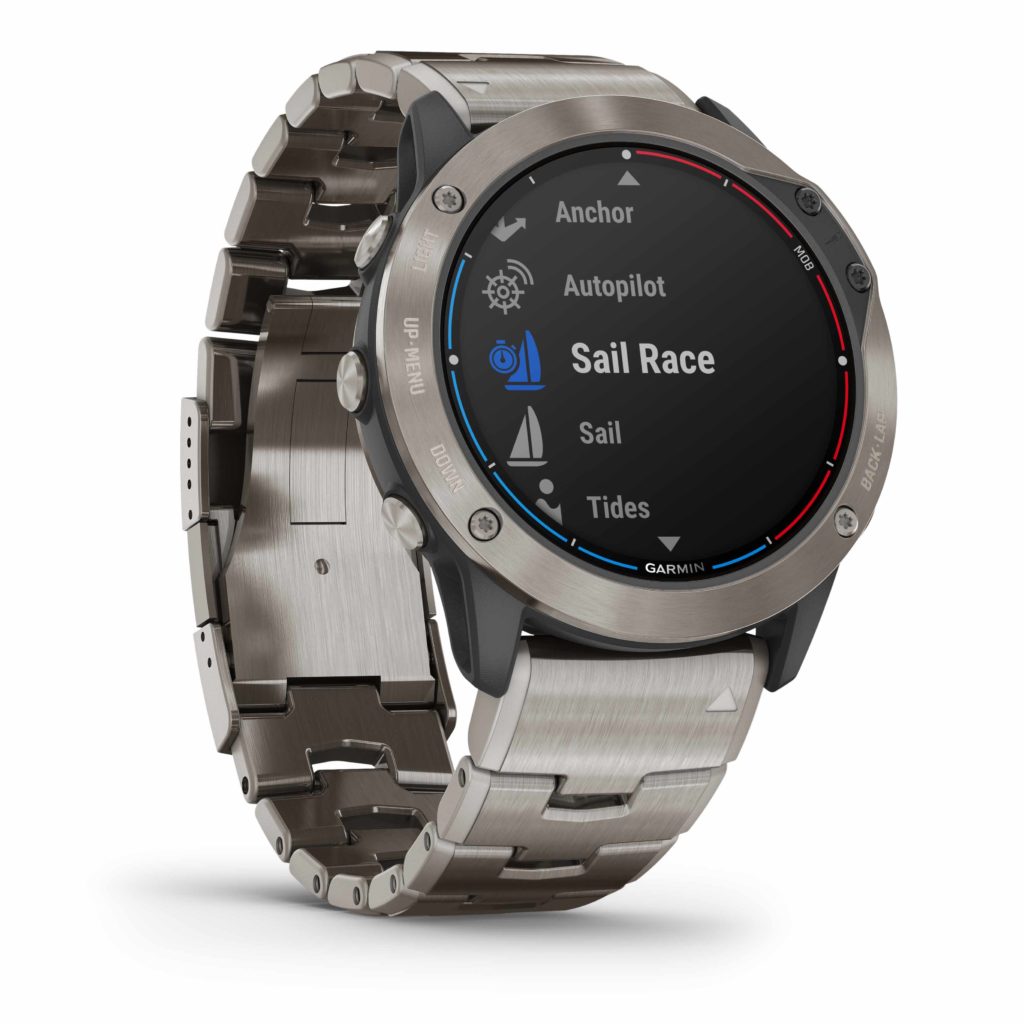 I charged the watch fully, and committed to not plugging it back in until it hit 0% so that I could see just how well the solar panel worked.

The new screen on the Quatix 6 line up is great. It’s crystal clear and super bright. Coming from an older Fenix 5 model, I was pleasantly surprised by how much more info I could fit on the screen without it being cramped or squashed. This was particularly noticeable when setting up data screens for activities. I could easily fit 6 different metrics on one screen, and all were easily viewable at a glance. While I wasn’t able to test it on a yacht connected to instruments, this translates well to the on the water activities, as you don’t want to be scrolling through pages looking for crucial info. Having it all on one page on your wrist, available at a quick glance is excellent.

Given it was lockdown, and I don’t know anyone with a boat that has the necessary set up, I wasn’t able to try it out while connected to instruments. I’ve tested older models like this, and the integration works well. So there is no reason this hasn’t at least remained the same (if not even improved on) in the newer models.

The Quatix line of watches easily connects with compatible Garmin chartplotters and instruments. Once paired, the data will stream to the watch, and the user can adjust their data screens to best see the data they find useful. I wish it was simple to stream from other instrument manufacturers, but given the lack of a standard, this isn’t surprising. There are some third party apps out there that can overcome this, but the process isn’t as straightforward as it maybe should be.

The Quatix can also control compatible Garmin autopilots. This is another cool feature, and something I think many cruisers would use; as they would the anchor watch feature, which will warn you if the watch thinks you’re dragging your anchor.

There are a plethora of other features and app integrations available to users, including the ability to control your Fusion sound system and waypoint marking. The Quatix 6 also has the ability to install actual marine charts onto the watch. The actual charts are paid for additions to the Quatix, but the ability to have this really speaks to how far wearable technology has come.

The SailAssist feature is geared towards racers, and allows users of the watch to get a ton of race related info. The user can ‘ping’ the start line, and get info such as time and distance to various points on the line, and, crucially, know if you’re over before the start! On top of this, after the race start the TackAssist feature kicks in, helping users work out if they are on a lift or header, and what the wind has been doing, in terms of direction. This takes a bit of set up in the pre-race, but once set up, it should at least help give you a sanity check.

Outside of all the marine features, all the ‘normal’ apps such as running, cycling, triathlon, hiking, and trail running come pre-loaded. As we’ve come to expect from Garmin, these are excellent and really well refined. The watch will pair with your ANT+ or Bluetooth sensors such as heart rate, cycling power meters, and various others. It will also work as your activity tracker, helping you keep track of your step count for the day.

There are a myriad of other features that the new line of Garmin watches provide, far too many to cover in this review. Another one I used during the testing was the Spotify app. You can sync various playlists from your Spotify account onto the watch, and connect your Bluetooth headphones. This was great as I could go running with music without needing to take my phone with me. 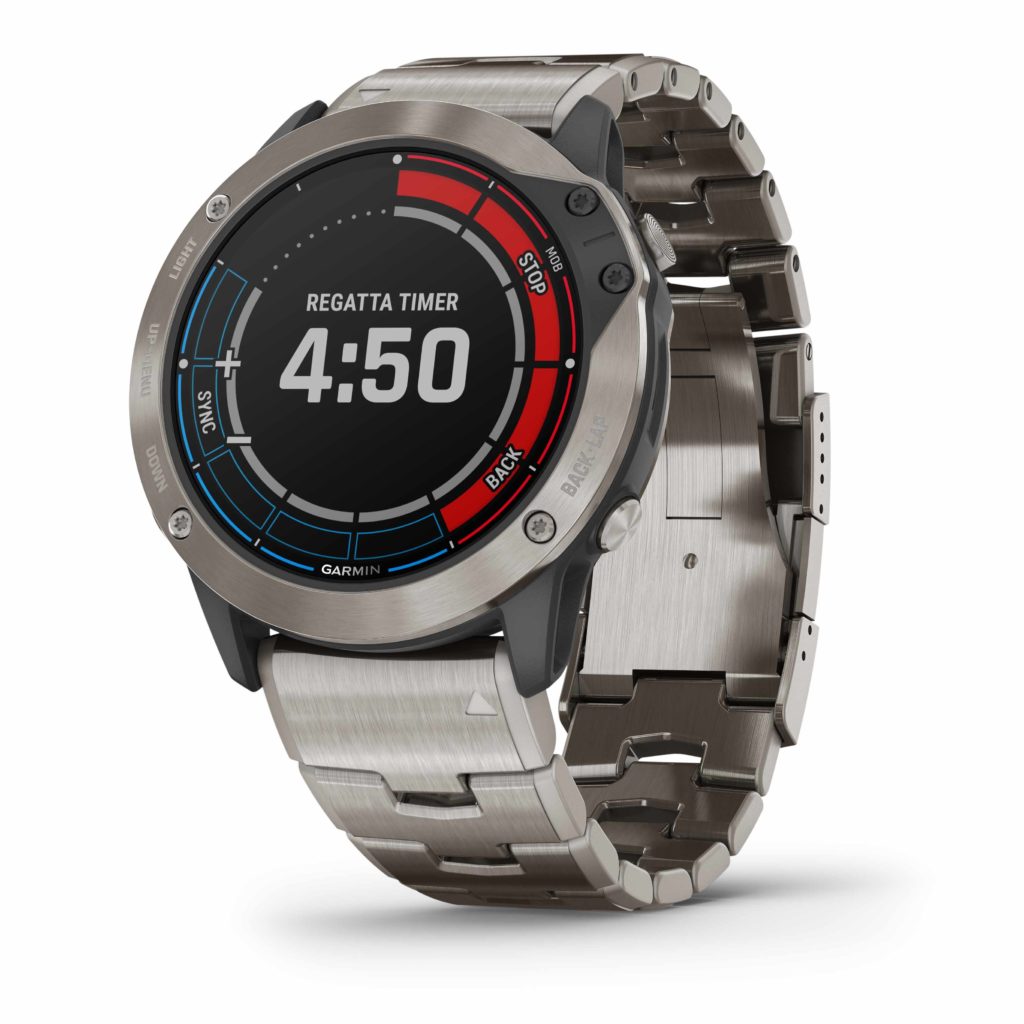 Finally, back to the solar panel. After 3 weeks of testing, the watch was down to under 10% battery left when I boxed it back up to regrettably send it back to Garmin. I was shocked that it had lasted this long, and I’m confident that if it was summer, or it wasn’t during lockdown, it would have more charge, as I really didn’t spend as much time in the sun as I would have liked.

As I alluded to earlier, my biggest issue with smart tech (and especially smart watches) centres around battery life and the need to constantly recharge them. Garmin seem to be tackling this with the inclusion of a solar panel, and the best part is that it does make a difference.

Outside of the solar panel, Garmin haven’t done anything revolutionary with the new line of Quatix watches, but they have made solid improvements over older versions that make the new Quatix 6s solar line a compelling purchase – or at least to have on the wish list.

As someone with the multisport equivalent, the older Fenix 5, I can certainly see some solid upgrades and improvements that make a case for an upgrade. For me, the solar panel alone would be a reason!

Designed with the serious mariner in mind, Quatix 6s combines all the best features of Garmin’s ultimate outdoor watch with everything you’ll need on the water.

Oh – and it does also tell the time!