Sailing in Durban received the generous news from the Royal Cape Yacht Club, the victorious 2017 Lipton Cup winners, with the offer to host the prestigious event in warmer waters.

In a letter presented to the Commodore of Point Yacht Club, Greg de Beyer, Commodore of the Royal Cape Yacht Club, Vitor Medina graciously offered the opportunity to host the respected event offshore of Durban mid-year in 2018.

In Medina’s letter, he referred to the 2013 event sailed offshore of Durban, where Point Yacht Club finished second to a boat that was subsequently found to have been illegally modified.

Medina stated, “While Point Yacht Club was earlier this year, formally declared the winner of the Lipton Cup in 2013, your club had of course been denied the opportunity of defending the Cup in 2014 on your home waters. This unfortunate situation can’t be fully rectified at this stage.

“Royal Cape Yacht Club, in recognition of this unfairness of your loss to a non-conforming boat in 2013, is prepared to forfeit our right to defend the Cup in Table Bay next year and offer the 2018 event to your Club to host during the week following the MSC Week.”

In response, a delighted Greg de Beyer, Commodore of Point Yacht Club enthusiastically accepted the offer. “This offer has been discussed by our General Committee as well as our Sailing Committees and I can confirm that the offer has been eagerly and unanimously accepted. 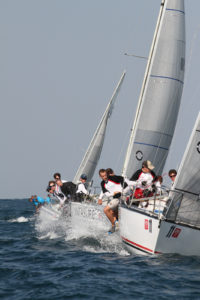 The Point Yacht Club’s 2013 entry competing offshore of Durban, skippered by Richard Weddell. The exciting news for 2018, the historic race will be returning to Durban shores.
Pic by Trevor Wilkins

“Point Yacht Club is firmly committed to promoting our sport in conjunction with other sailing clubs and organisations throughout South Africa. Whilst we never doubted the goodwill and common goal of the Royal Cape Yacht Club, we welcome this gesture and will do our utmost to ensure that 2018 event is a success and is undertaken in the spirit in which the gift was given to our sport.”

The helmsman for the Point Yacht Club’s Lipton entry, Richard Weddell, has had a somewhat dramatic Lipton campaign. Finishing a respectable fourth in his first attempt down in Simons Town in 2012, Weddell and his team then sailed magnificently offshore of Durban in 2013, finishing tie on points with False Bay Yacht Club, but due to a count back, they ended their regatta with the position of runner up.

“It is a bit of a bitter-sweet feeling, hearing this news. The guys and I worked so incredibly hard, leading up to the 2013 challenge, and the week of the challenge. We were honestly devastated at the result. It marred our enthusiasm in getting back on the water. The generosity shown by the Royal Cape guys is tremendously kind. This gentlemanly act certainly will inject a great deal of interest back into sailing, and specifically this historic event, and hopefully motivate many for the future.”

With this announcement, the Rear Commodore of Keelers is hard at work scheduling in trials to select the best suited team to challenge for the Royal Cape Yacht Club’s title.