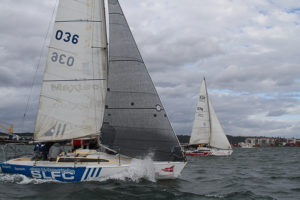 Nine University teams will take to the water to participate in the second Point Yacht Club’s Inter-Varsity Match Racing event this week.

On the back of the highly successful Americas Cup held in Bermuda, Durban will see fifty sailors from various universities from around the country, competing in this exciting, tactical format of yacht racing.

The nine teams hailing from UCT, Wits, TUKS, Rhodes, Durban University of Technology, Stellenbosch and University of Kwa-Zulu Natal will compete on L26s, racing in the harbour. Wits, with a keen sailing interest having entered a team in the recent Cape to Rio race, will have three teams representing their university.

Race Officer for the event, Edrich de Lange will hold 49 quick fire there-and-back sprints for the varsity teams where there will only be two boats competing on the race track at any given time. The two top teams will then meet in a best of three final on Friday. Heading up the vital role of judging is Cape to Rio sailor, Ricky Robinson. With Durban’s very own Siyanda Vato coordinating the shuttle service of the teams to the boats.

Hot on the heels of the MSC Week, a number of the sailors have been relishing the Durban winter conditions having competed in the weeklong regatta offshore of Durban last week. The two teams from UKZN and DUT got in some fantastic training

The conditions expected for the match racing promise to be light in the early stages with the wind gently building in the latter part of the week.