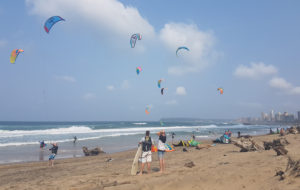 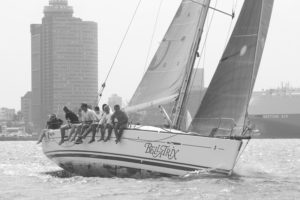 Jethro Brophy-Tintinger stormed to victory in this year’s Bart’s Bash that took place ahead of the huge south westerly buster late on Saturday afternoon.

Sailing on his Hobie 14, this is the second time in the four year history of Bart’s Bash, that the Glenwood High School lad took line honours in the Durban leg of the World’s Largest Sailing event. For most of the race he was hunting down the typically fast Hobie Tiger of Struan Campbell and Murray May, but the lightening quick duo neglected to read the Notice of Race, and only completed half of the course, scoring a disappointing DNF.

With the lead now firmly in his grasp, the ‘Jet’ propelled Hobie 14 finished the two lap course in a respectable 31 minutes and 1 second. He was followed by a slew of Flying Fifteens with Patrick Harris and Jeremy Kriek taking second over the line, and third was Myles White, Rear Commodore of Dinghies for Point Yacht Club, and his crew member Estelle Buys. Special mention of international guest, Laser sailor Lauritz Walsøe from Denmark who helmed a local Flying Fifteen for the first time, and placing sixth over the line.

First keel boat home was the magnificent Bellatrix skippered by Gregg Hurter, concluding his run around the course in 37 minutes and 11 seconds. On corrected time, Bellatrix slotted into third, while Gavin Smith helming his boldly coloured pink boat named Zing was deemed first on handicap, with Brophy-Tintinger’s brother, Eli on iThemba taking the title of second keelboat to finish on handicap.

Another family that relished the conditions where the Fokkens. Dad, Bart lead the way in the family competition, taking 12th place on his Paper Tiger Cat, with son, Rudi helming the L26 SLFC Spindrift to 13th place and youngest, Hannah placing 14th on her Laser Radial.

Visiting yacht from Bluff Yacht Club, Andrew Murray kept his annual tradition of joining in the annual opening sail, and also participating in the fabulously fun of Bart’s Bash. Murray sailing with his crew on his yacht Liquid Blue took 15th spot overall.

The only youngster to brave the conditions was the fearless Vincent Vermaak who handled his little Optimist perfectly in the blustery winds, and managed to finish mid-fleet in 20th overall.

The harbour was a hive of activity with 42 boats registered for the bash in the bay. As the westerly built, the younger sailors took refuge and made an early exit, not completing the race. 15 boats escaped the winds, and sadly had a DNF next to their names for the bash board, with only 25 boats finishing in the brisk 25 + knots.

At the beach site in the afternoon, 29 kiteboarders took to lumpy seas in a short blast downwind, with Rob Crystal landing on the beach first in a time of 14 minutes and 3 seconds.

The course was 8.75kms long with an average wind of 19 knots. The race was mostly downwind apart from getting out at the start which was a tight reach. The finishing times varied from Crystal’s blitz of 14minutes 03 seconds to 33 minutes and 19 seconds. Five kites bailed mid-race, not finishing and only one of the young competitors didn’t get out of the starting blocks.

Former Olympic sailor, Alec Lanham-Love who helped organise the kite side of Bart’s Bash, said, “We had planned to start mid-afternoon but made the call to start earlier as the predicted winds looked gnarly. We had awesome kiting conditions just after lunch, with the wind at 18 knots when we launched. Launching was difficult as it was high tide and not much beach to set up the kites on. But we all enjoyed ourselves, it was physically demanding but great fun.”