On this Day – 25 October. A Peek Into Our Sailing History 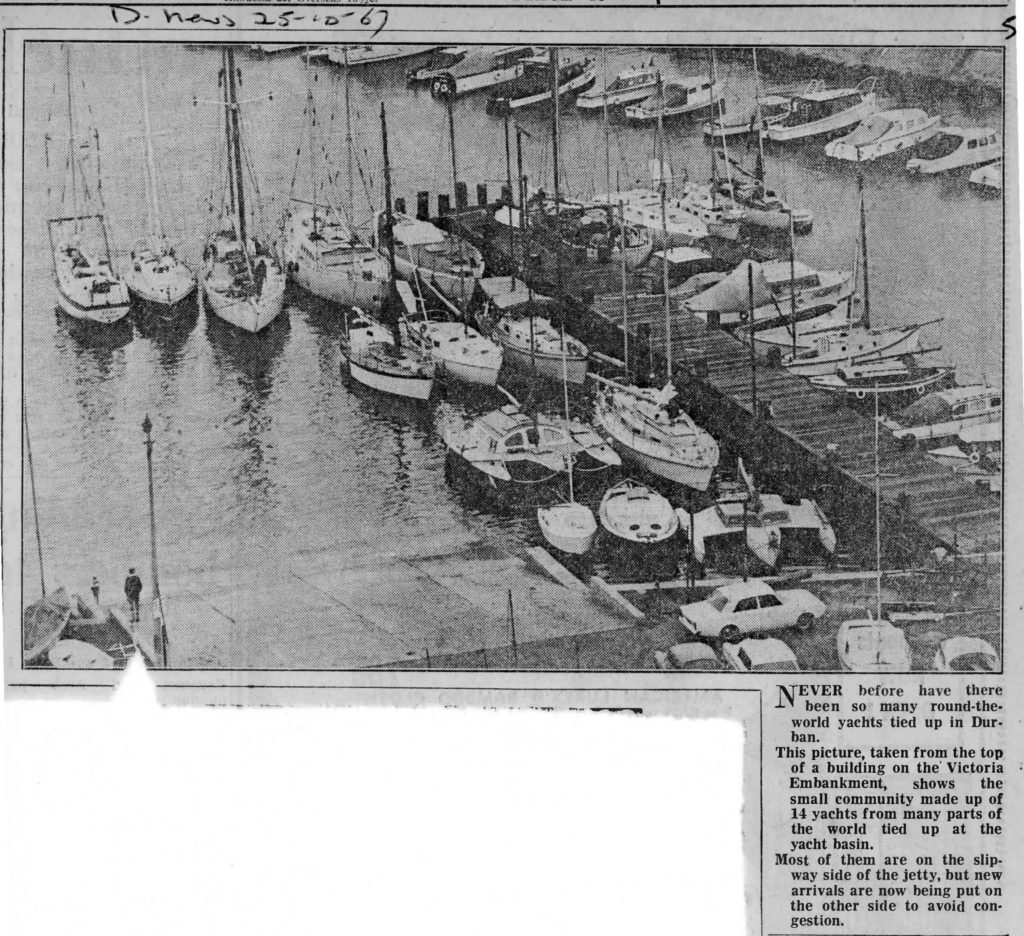 Today is pretty low-key, but important in that a City of Durban proposal to reclaim land from Durban Bay for the Royal Natal Yacht Club was significant – yet 52 years later absolutely NOTHING along these lines has materialised! And Durban sailing has suffered as a consequence.

There is an ‘Editorial Comment’ on the above matter, and an aerial view of international yachts tied up at the old ‘International Jetty’. Many an old Durban yachtie will remember this jetty.

Bertie Reed, in communication from sea, spoke out in support of Alain Gautier and the penalty he received in the BOC Challenge.

And finally, the all-women crew in the Whitbread Race finished in Uruguay.

1967. “Save Durban’s Bay Businessmen Plead”. Strong opposition to a City Council proposal to offer the Royal Natal Yacht Club a site for a new club house on land reclaimed from Durban Bay was expressed yesterday by two leading businessmen in the city. To read the full report, Click on the following LINK:  1967 10 25 c

1967. “Window On The Bay”. The Durban Bay fillers-in are at it again – this time with a scheme to reclaim five acres between the Gardiner Street mole and the yacht basin. To read the full report, Click on the following LINK:  1967 10 25 c.

1990. “Reed Speaks Out in Support of Alain Gautier”. Veteran South African skipper Bertie Reed has come out in support of BOC Challenge line honours winner Alain Gautier, who was given a 16-hour time penalty for arriving late at Newport, Rhode Island, before the start. To read the full report, Click on the following LINK:  1990 10 25 393

1993. “All-Women US Crew Complete the First Leg”. US yacht ‘Women’s Challenge’, the only entry with an all-woman crew in the Whitbread round-the-world race, became on Saturday the 11th vessel to complete the first leg of the competition. To read the full report, Click on the following LINK:  1993 10 25 204