On This Day – 23 December. A Newspaper History of Sailing 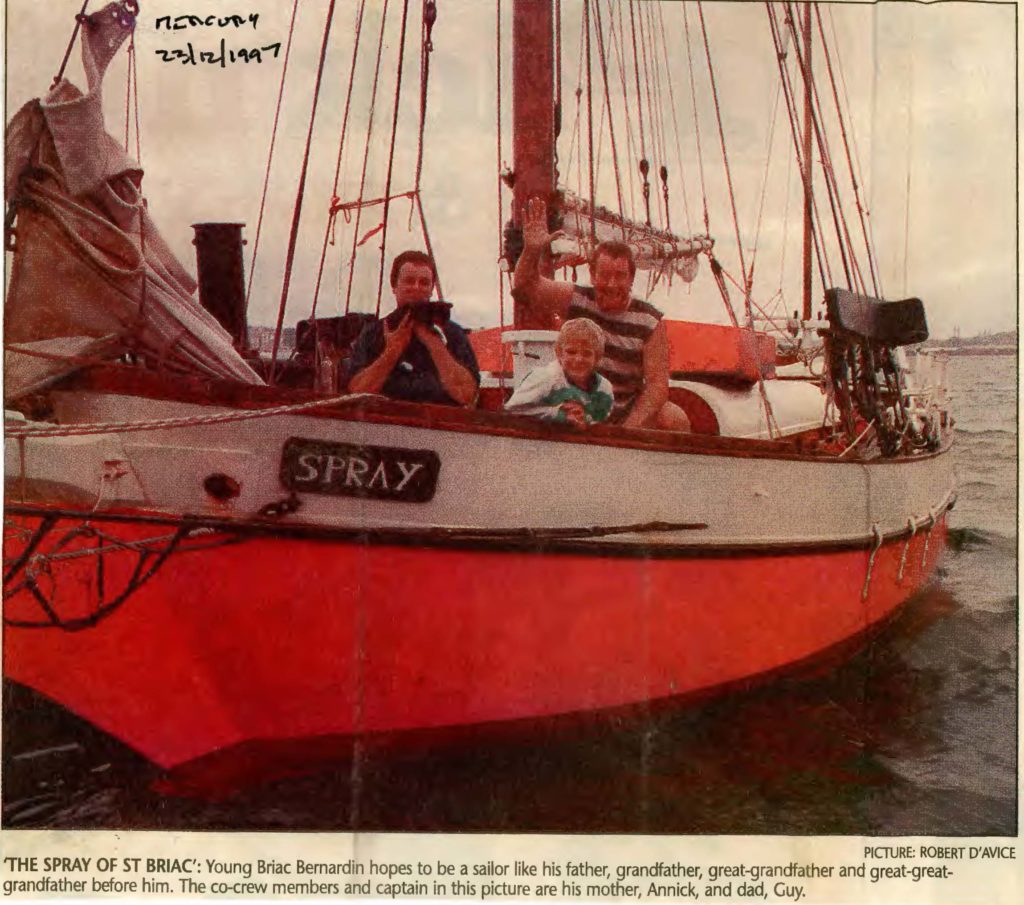 1970. “Storms Hit Another Rio Yacht”. Jakaranda, a favourite in the Cape to Rio yacht race and skippered by Bruce Dalling is the latest victim to fall foul of heavy storms on the way to the starting line in Cape.
To read the full report, Click on the following LINK:  1970 12 23 833_Redacted

1985. “Kuttel Races to Handicap Lead”. After two more high speed overnight runs, the Cape-based maxi Atlantic Privateer, skippered by Padda Kuttel, shot into the handicap leadership at the weekend in the second leg of the Whitbread Round the World Race.
To read the full report, Click on the following LINK:  1985 12 23 884

1991. “Russians in America’s Cup Dispute”. About two dozen Russians hoping to supplant the Estonia based official challenger for the America’s Cup arrived at the weekend without their boat, which was sent back to Russia in a dispute over payment for the airfare.
To read the full report, Click on the following LINK:  1991 12 23 414 37

1993. “Tabarly Called in to Quell Mutiny”. Eric Tabarly, France’s most famous yachtsman, is to come out of retirement to quell a mutiny in the Whitbread Round-the-World race.
To read the full report, Click on the following LINK:  1993 12 23 310 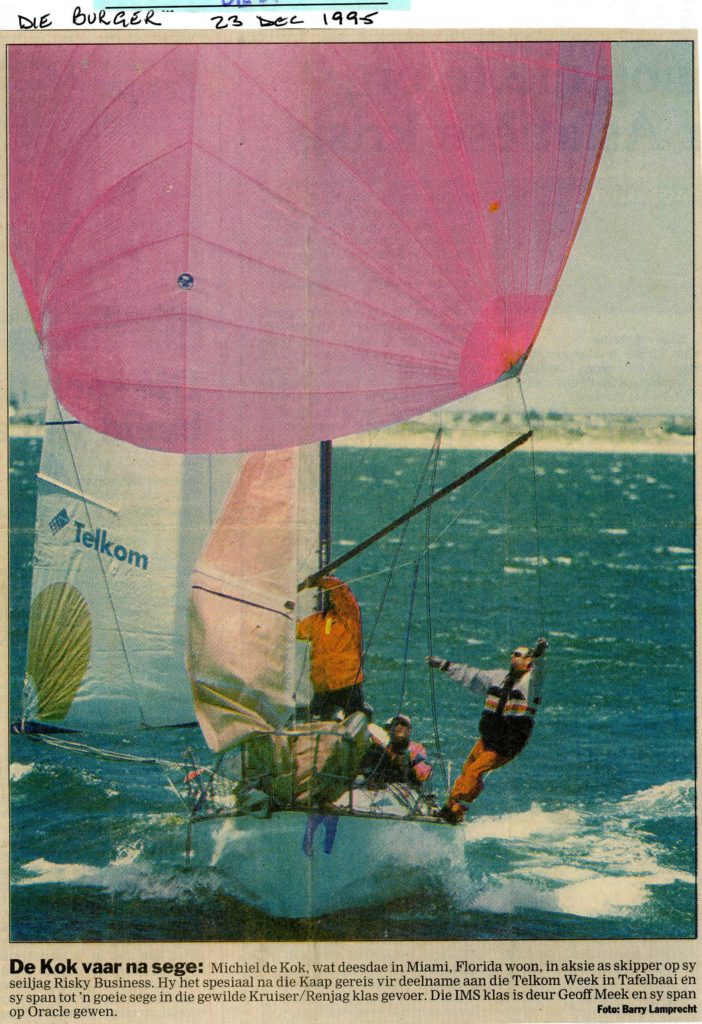 1996. “Oh, for A Christmas on St Helena Island”. The past week has certainly been pretty hectic with regattas and races all over the country and across oceans.
I must admit to having been very envious of those guys competing in the St Helena Race, a 1 700 nautical mile race from Cape Town to St Helena Island which started on December 6. I could think of nothing better than spending a week or so at sea, and then relaxing over the festive season on that famous island, before sailing back to Cape Town on the Royal Mail Ship the “RMS St Helena”. incidently the race was won on handicap by Dr Carl van der Merwe’s “Massey Ferguson”, with Joe van der Westhuizen’s “Nina” taking line honours.
To read the full report, Click on the following LINK:  1996 12 23 244

1997. “Guy Poised to Repeat Sea Voyage”. Born in 1945, 100 years after the first man to sail around the world single-handedly; Mr. Guy Bernardin and family are on track to complete the same route, in a replica of the original wooden yacht – and reach Newport in the US in time for the centenary celebrations.
To read the full report, Click on the following LINK:  1997 12 23 294 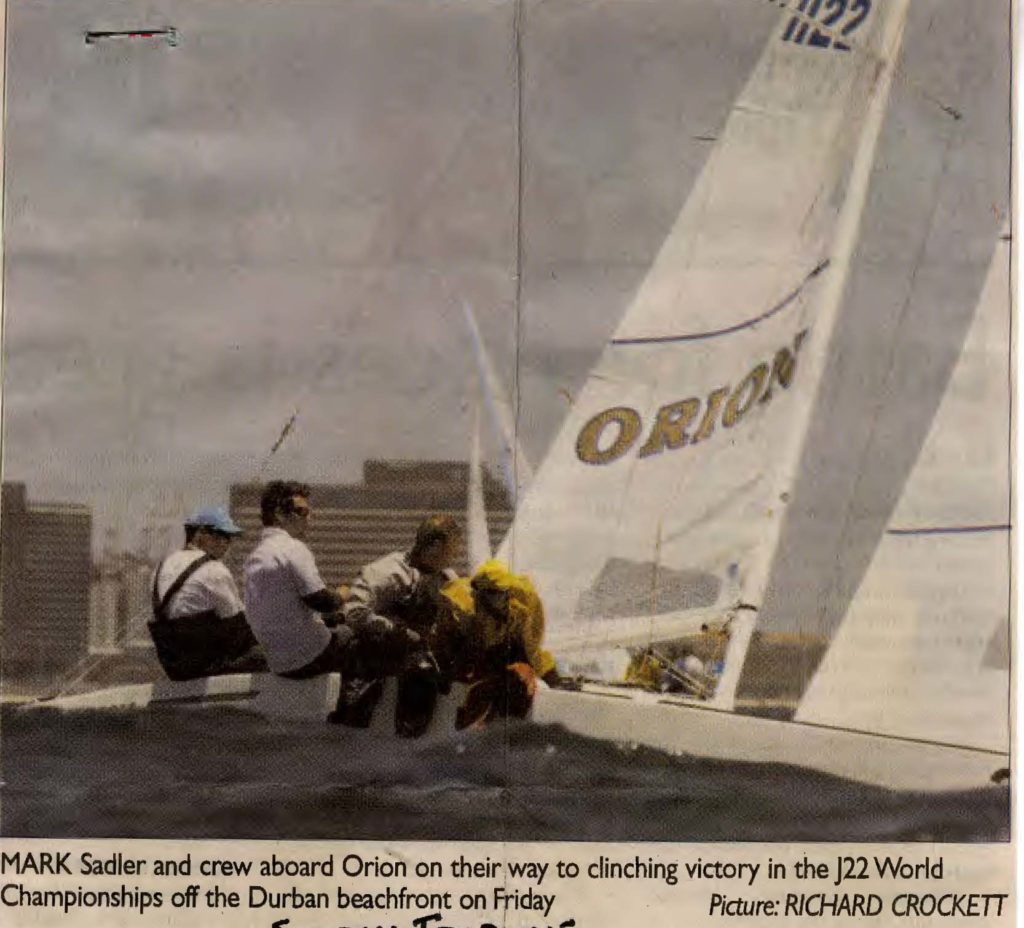 2007. “Sadler Shows His Winning Class”. The sea off Durban was meant to be full of J22 sails last week, but the weather gods put paid to that – for a few days, anyway.
The first two days of the Eikos J22 World Championship regatta were literally blown out as gale force south-westerlies not only made conditions too unfavourable for championship sailing, but the marina also took a pounding and broke in a few places, trapping some of the competitors’ boats.
To read the full report, Click on the following LINK:  2007 12 23 721