On this Day 16 October. A Peek Into Our Sailing History 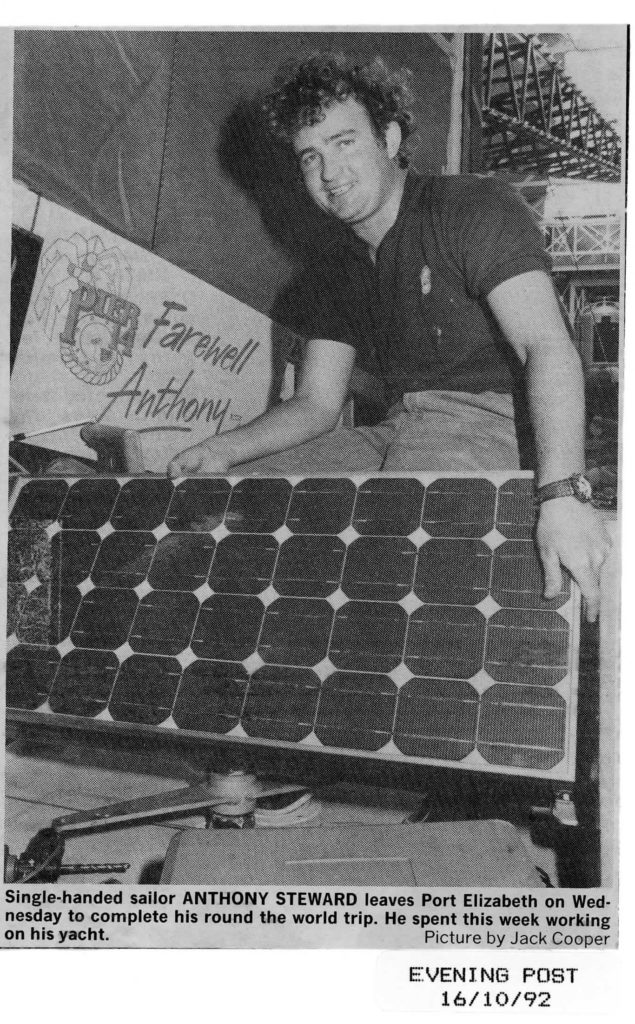 I continue to be amazed at how much coverage the daily newspaper gave our sport “back in the day”. Today the excuse is always “there’s not enough space” – which is probably true as graft, corruption, murder, rape and opinion pieces fill our daily papers. Sad, but true.

More positively though we start with a humorous editorial from “the idler’s column” of the Mercury in 1969 when John Vigor wrote that piece. Today Vigor is a well respected author of books on our sport.

Reports, even in 1969 for the 1971 Rio Race, indicated that there would be 5 Natal yachts competing. Jump forward 17 years, and the headlines shouted that John Martin would continue to race despite sponsorship issues. There’s a great pic of Jacques de Roux arriving in Cape Town. The headlines blurted – “yacht race was not easy sailing” in reference to the 1987 Beachcomber Crossing. John Martin slipped back to 3rd place in the BOC Challenge, while an opinion piece indicated that there was no room for the Rio Race and Mauritius Race in the same year. Bertie Reed launched a new Sovereign 54, while intrepid sailor, adventurer and round-the-worlder Ant Steward was scheduled to leave Port Elizabeth towards wrapping up his intrepid voyage in Cape Town.

1969. ‘Sailing in A Few Simple Lessons’. Almost everybody in this enlightened age knows something about machinery. But comparatively few people know how a simple thing like a yacht works. CLICK on this link to read all about it:  1969 10 16 2

1969. ‘5 Natal Yachts Enter Race’. 5 Natal yachts will be entering the Cape to Rio Race in January 1971. Four of these entries have been confirmed by the South African Ocean Racing Trust in Cape Town – the organisers of this event. CLICK on this link to read all about it:  1969 10 16 b

1986. ‘Martin Will Continue Race to End’. ‘Tuna Marine Voortrekker II’, winner of the first leg of the BOC solo round-the-world race, with Springbok John Martin at the helm, will continue as a participant in the race, through to the finish, despite sponsorship issues. CLICK on this link to read all about it:  1986 10 16 517

1990. ‘Yacht Race Was Not Easy Sailing’. All of the more than 350 sailors who took part in the 1987 Beachcomber Crossing yacht race from Mauritius to Durban this month had a gripping tale to tell on arrival at the finish. CLICK on this link to read all about it:  1987 10 16 6

1990. ‘South Africa’s Martin Slips Back to Third Place’. The order at the head of BOC Challenge yacht race has changed substantially with Alain Gautier re-claiming the lead and John Martin slipping back to third place. CLICK on this link to read all about it:  1990 10 16 393

1991. ‘Cape to Rio Sets Yachtsmen A Poser’. The possible revival of the Cape to Rio yacht race is aimed for January 1993 – but already South African yachtsmen are beginning to agonise over having to choose between two major races in the same year.  CLICK on this link to read all about it:  1991 10 16 412 17

1992. ‘Sailor to Continue Record Attempt’. Intrepid single-handed sailor Anthony Steward leaves Port Elizabeth on Wednesday to complete the voyage interrupted when his yacht capsized in July. CLICK on this link to read all about it: 1992 10 16 433 2