On This Day – 15 September. A Newspaper History of Sailing 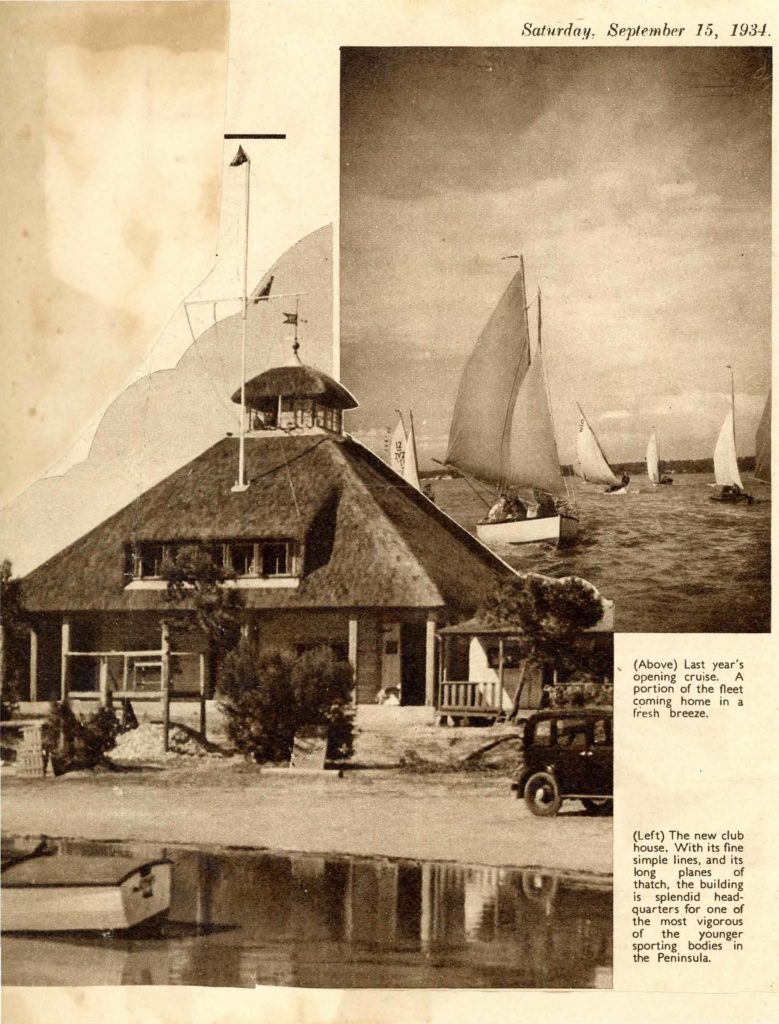 To read the full reports, click on the LINK following each headline.

1967. “Vital Race in America’s Cup Series”. The defending American yacht Intrepid and Australia’s challenger Dame Pattie were hauled from the water today for drying out before their fourth race tomorrow which could decide the current best-of-seven America’s Cup series.
To read the full report, Click on the following LINK:  1967 09 15 – Pfotenhauer – 000097

1969. “Sprog Race Planned At Allemanskraal”. Sprog skippers from all over South Africa will gather at Allemanskraal Dam in the Orange Free State in two weeks’ time for the South African championships. An added attraction this year is that an invited foreign yachtsman of world class is to compete in the regatta.
To read the full report, Click on the following LINK:  1969 09 15 – Pfotenhauer – 000102

1989. “Defence Set Sail in Full Force”. For the first time, the South African Defence Force Sailing Club has entered more than one yacht in the race. This time they will be represented by: Tuna Marine Voortrekker II, a Western Province Defence Sailing Club entry; Cart-Ad, from Boland Defence; and Duna Engineering, from Durban Defence.
To read the full report, Click on the following LINK:  1989 09 15 – stitched – daily news

1990. “World’s Top Sailors Set Out From Newport”. At noon, east coast American time today, 28 of the world’s most expensive yachts, skippered by the world’s finest sailors, will nose out of Newport, Rhode Island, and into the Atlantic at the start of the 1990 BOC Round the World race.
To read the full report, Click on the following LINK:  1990 09 15 100 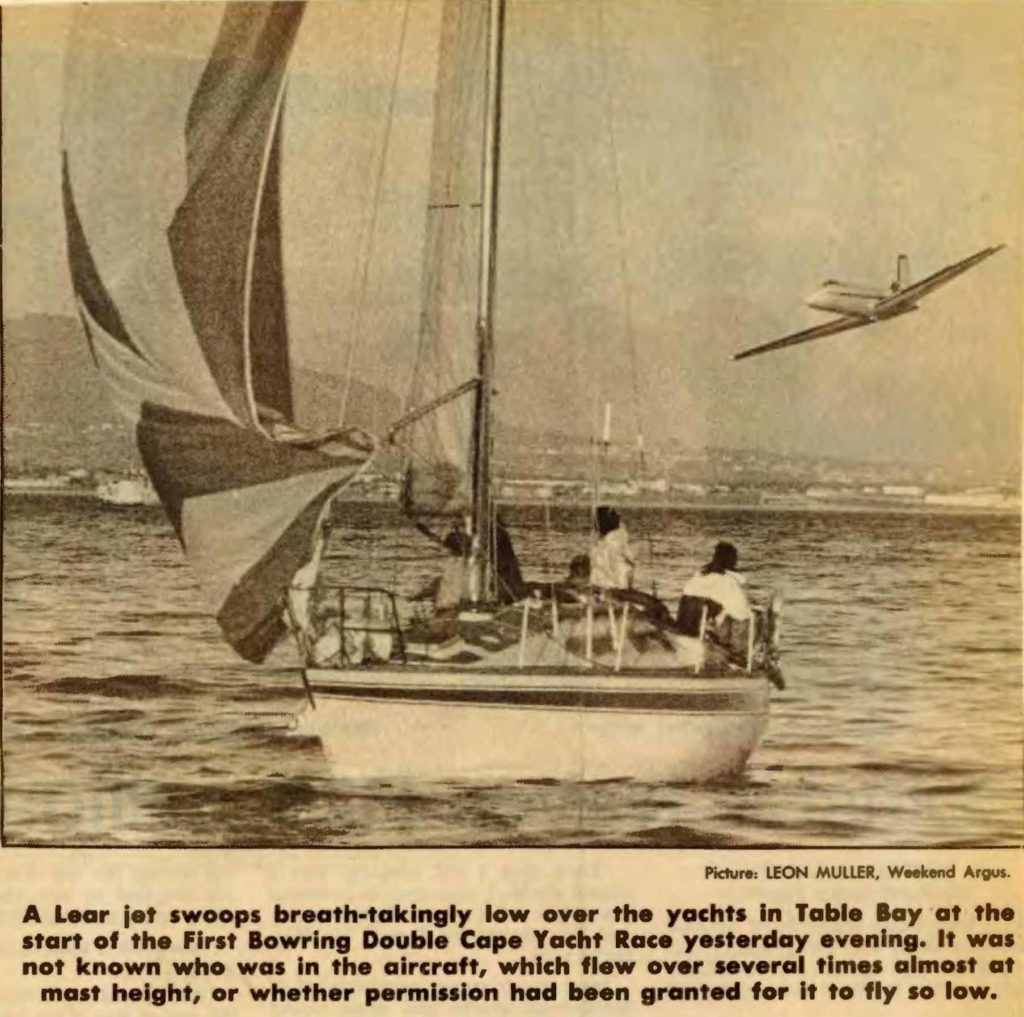 1990. “Low-level Jet Just Seaing”. The owner of a zippy private jet that buzzed the start of the First Bowring Double Cape yacht race yesterday says he was just getting more fun – which incidently is the name of his yacht – but he might have run foul of aviation regulations.
To read the full report, Click on the following LINK:  1990 09 15 – 000354 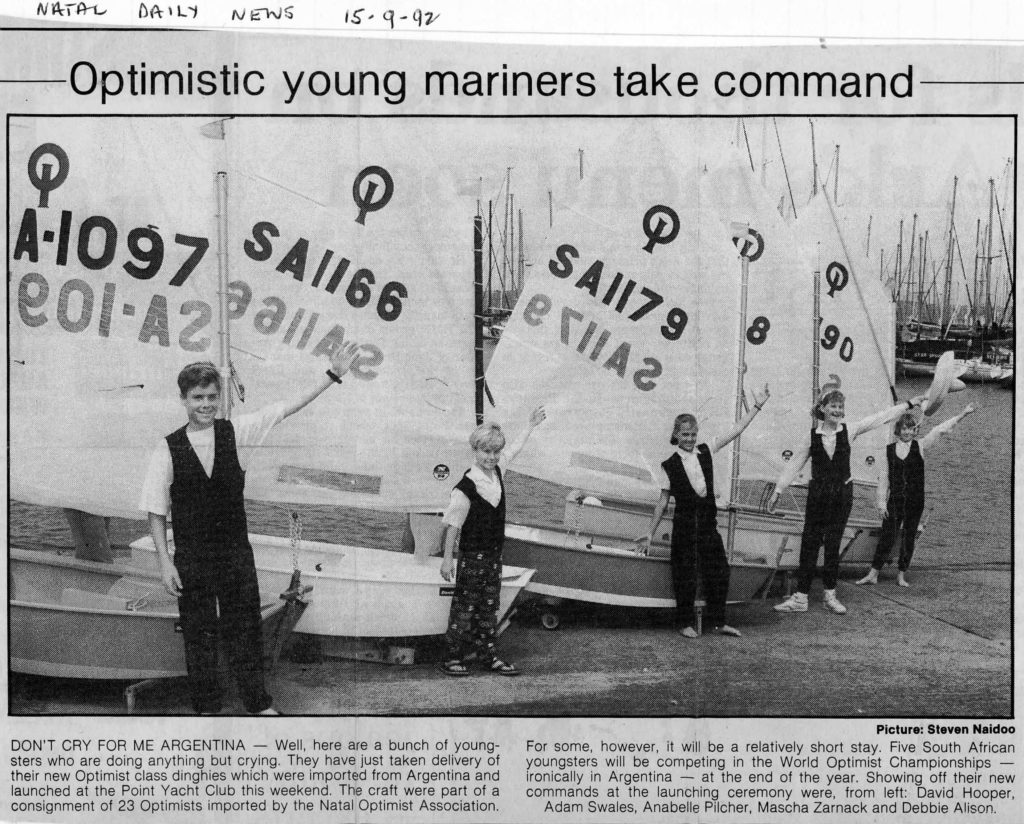 1994. “Large Fleet Challenges for Honours in Agulhas Race”. It was 1974, and yachting history was about to be made in the Agulhas race on the famous South African Navy entry, Voortrekker I, skippered by a 30-year-old Petty Officer named Bertie Reed and sailing with a crew of six including a young watch captain, Lieutenant John Martin.
To read the full report, Click on the following LINK:  1994 02 09 155 2

2004. “Deaf Sailor on Solo Journey”. WHILE many people may give up on their dreams and aspirations because of their disabilities, novice sailor Charl de Villiers is attempting to be the first deaf person to sail around the world solo in his yacht Island Time.
To read the full report, Click on the following LINK:  2004 09 15 483

2005. “Salvador is Destination for 10th South Atlantic Race”. Sailors competing in the 10th Heineken Cape to Bahia Yacht Race, also known as the South Atlantic Race, are to set sail next year for Salvador instead of Rio de Janeiro.
To read the full report, Click on the following LINK:  2005 09 15 531

About “On This Day”
It was towards the end of September last year, yes 2019, that I started “On This Day. A Newspaper History of Sailing.” So nearly a year has passed without a day being missed and without there being any newspaper news or pics available in my newspaper archives to share.

It all started while I was busy archiving many boxes of press cuttings I have accumulated and which I guestimate run into tens of thousands! A daunting task which I believe to be necessary as I have been concerned for many years about the lack of interest Clubs, Classes and other sailing related organisations give to preserving their history, and that of our sport.

This is my personal crusade, and instead of simply archiving and keeping the contents away from prying eyes, I share my spoils in the hope that you will enjoy reminiscing as much as I do.

As of the end of September the format will change as it’s simply not sustainable to continue for another full year on a similar basis. I have some 25 000 scanned newspaper cuttings, and have used the best so far – but as in life some variation and change is required. What those changes are I have not crystallised yet, and would enjoy feedback from followers of this Blog as to what they would like to see.

I have tons of material available – from every single issue of SA Yachting, Yachtsman RSA (newspaper – remember it?) and Sailing Inland & offshore Magazine. Between those publications – from October 1957 until June 2017 – a period spanning 60 years of coverage of the sport of sailing in this country – I have in my possession.

I am scanning every single issue of those 60 years – that’s 720 issues – and digitising them to get the fullest value possible from them. So far I have uncovered some incredible gems in their pages, and will share these as we go.

Plus I have a photographic archive of photographs in b/w negative format, colour negative, colour slide (transparency) and photographic prints I intend to scan, digitise and share with the sailing community at large.

But all this takes time – and is a slow process – so all I ask is for patience.

My plea thought – to all followers and everyone interested in the history of sailing in RSA, is to please assist me by sharing their personal archives, pics, press cuttings and whatever with me, so that I can scan them and share them. My promise is that I will treat them with the utmost care, and get them back to you safely.

To date, the response to “On This Day. A Newspaper History of Sailing” has been phenomenal, and it’s heartening to see how many people appreciate, LIKE and SHARE the material I have shared in the past year. And this is from ‘Saffers’ and others who have lived and sailed here, or have travelled internationally to sail here.

I am overwhelmed by the response – and thank all those who have personally made contact.

Should you wish to copy, forward or share material from here, PLEASE acknowledge the source as: Sourced From the SAILING Mag Archives & Historical Records.

As each scanned cutting and article is searchable, I am able to create presentation packs personally tailored to a persons exact requirements – ie. Rothmans Week, the NCS Regatta, the Rio Race, Mauritius Race, Vasco da Gama Race and more – or simply by the name of an individual (like Ant Steward and his open boat exploits) – for those who want a record of his/her sailing career for the family archives.

I have already done this by scanning in excess of 18 000 pages of material I have on ‘Voortrekker’ – from idle chatter, to concept, to the formation of what ultimately became the South African Ocean Racing Trust (SAORT), to the fruition of the 1968 OSTAR Race in which Bruce Dalling and ‘Voortrekker’ excelled – and even beyond that.

The possibilities are endless – so watch this space as it all simply gets better every single day!

So sit back, grab a cup of your favourite brew, and enjoy what’s on offer today.