On This Day – 1 November. A Peek Into Our Sailing History 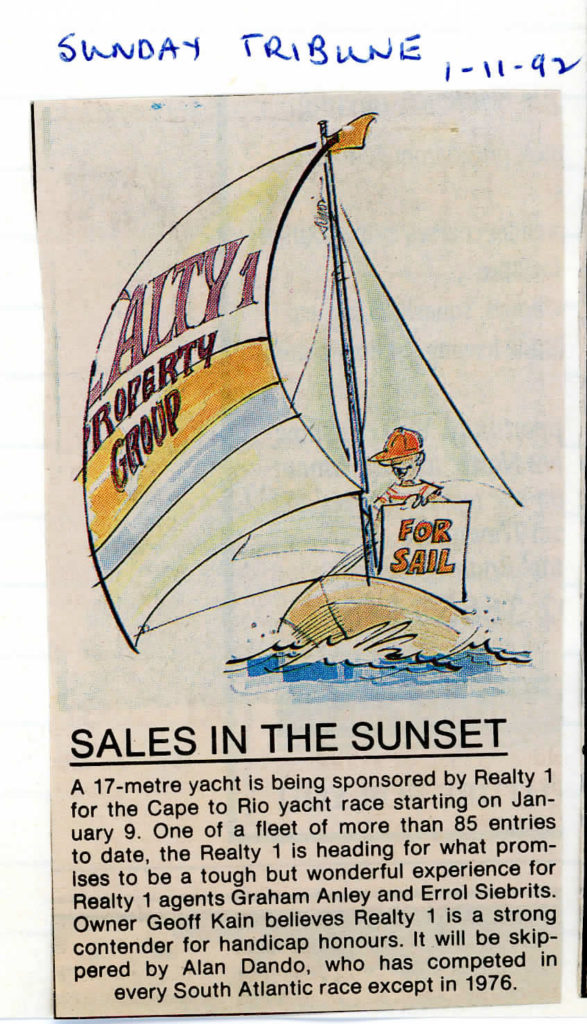 There is tons of news today, so let’s get to it!

International cruising folk who arrive in this country during this period continue to be enamoured with our beautiful country, and Africa as a whole. This cruising couple took off from Durban on motorbike on a trip through Africa, having sailed from New Zealand.

Luderitz yachties gathered to give every possible assistance to ‘Portatan’ in assembling a makeshift mast to get her to Cape Town to finish the Whitbread race first leg.

A really large spread entitled “Ready for the Roaring Forties” delves deep into what the BOC Challenge skippers were preparing for. And John Martin got to soar in an Impala jet.

The 1991 Crystic Beachcomber Crossing attracted good press coverage almost a year in advance of the race, while three young Vaal sailors were off to the J22 World Championship.

A gruelling new race where sailors and runners cashed is described by Dale Granger.

1967. “Yachting Couple Take to Two Wheels”. A New Zealand couple, who arrived in Durban a few weeks ago by yacht, set off on a trip through Africa by motor-cycle yesterday morning.
To read the full report, Click on the following LINK: 1967 11 01

1985. “Port Buzzes As Crippled Yacht Limps in”. The people of Luderitz scurried like lobsters in a net yesterday to rig a temporary mast for Whitbread round-the-world race leader, ‘Portatan’ – and still prepare their own boats for the beginning of the crayfish season this morning.
To read the full report, Click on the following LINK: 1985 11 01 810_Redacted

1986. “Ready for the Roaring Forties”. Down at Royal Cape Yacht Club, temporary home for almost two dozen yachties preparing to face the roaring forties of the southern Atlantic as they make their way singlehanded round the world in the BOC Challenge, there is much talk of local heroes John Martin and Bertie Reed.
To read the full report, Click on the following LINK:  1986 11 01 538 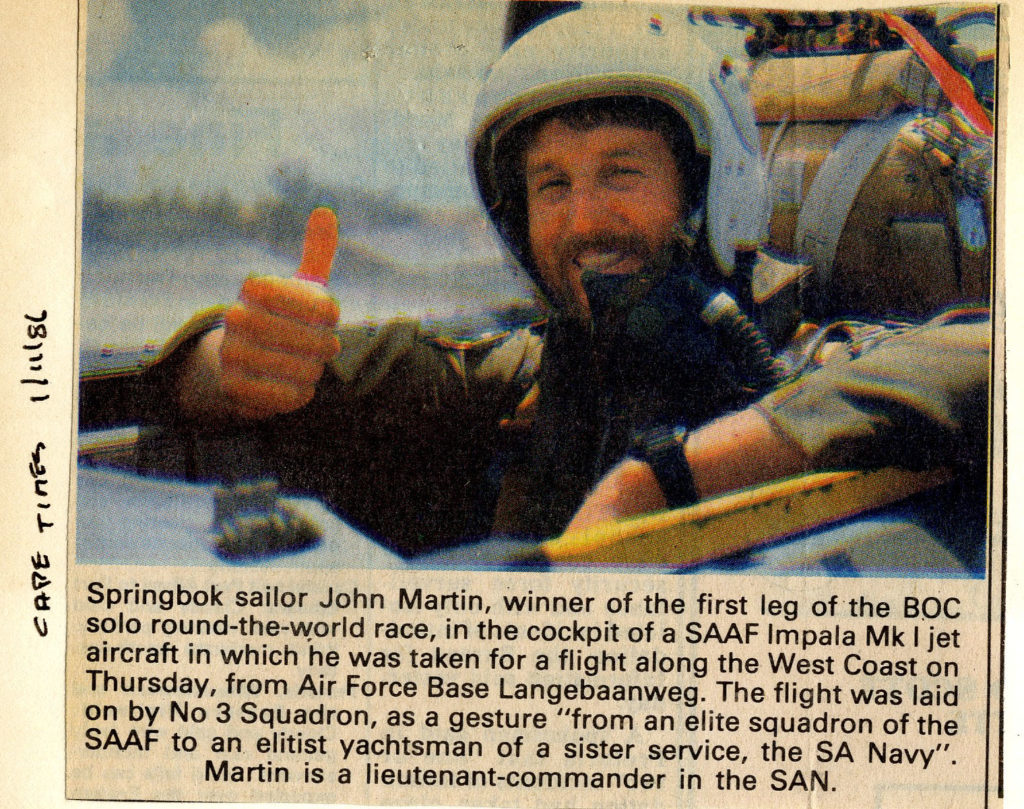 1986. “Martin Sailed and Soared”. Tuna Marine Voortrekker is back at Royal Cape Yacht Club after being made shipshape in Simon’s Town for the next leg of the BOC Challenge round-the-world race to Sydney.
To read the full report, Click on the following LINK:  1986 11 01 538 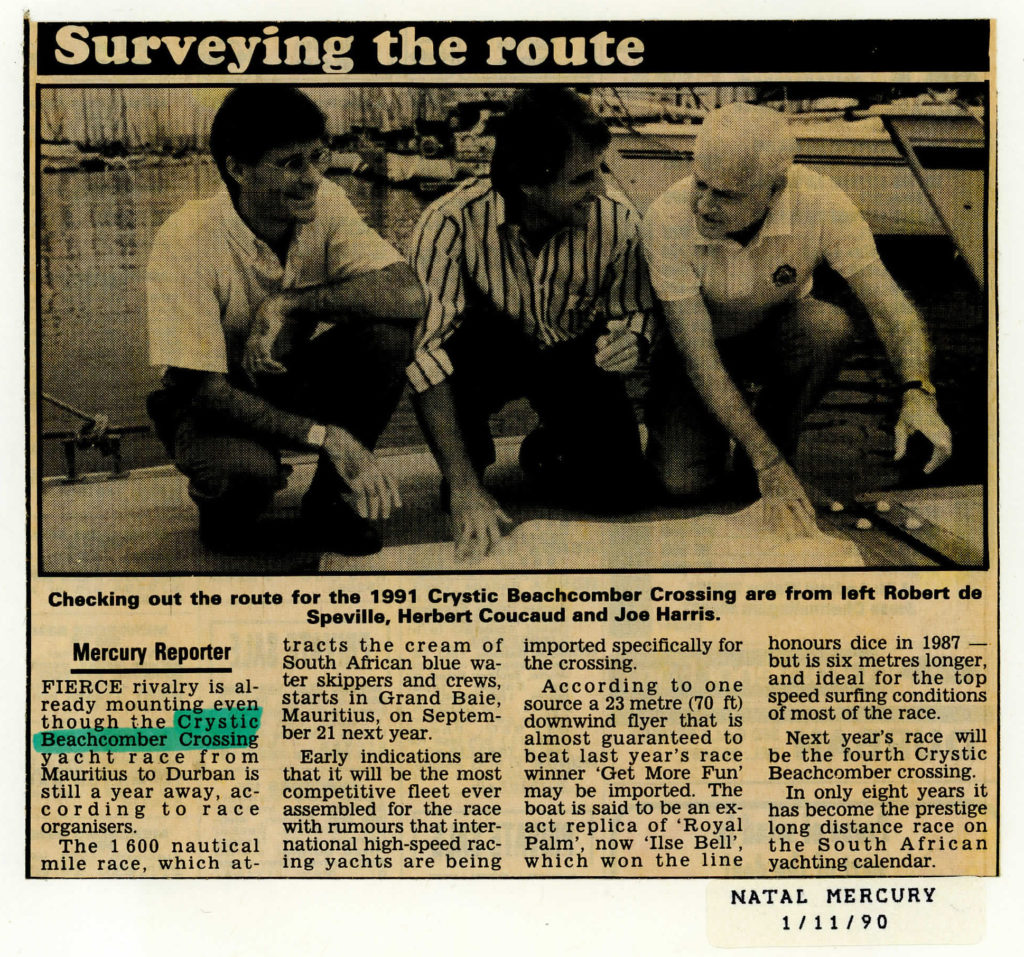 1991. “Vaal Sailors For World Event”. Three young Transvaal sailors will represent South Africa at next year’s J22 world championships on Lake Michigan, in the United States.
To read the full report, Click on the following LINK:  1991 11 01 412 7

1995. “Sailors, Runners Clash in Gruelling New Race”. Athletic strength versus sailing power will be the scenario at the Fish Hoek Beach Sailing Club next Saturday when a host of distance runners square up to South Africa’s top catamaran sailors in a new, unique, exciting and gruelling race from Fish Hoek to Cape Point and back.
To read the full report, Click on the following LINK:  1995 11 01 261