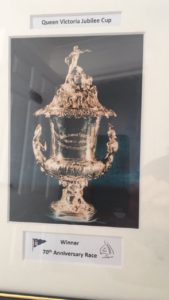 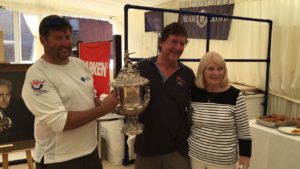 Jeremy Kriek and Campbell Alexander with the winners trophy.

Two dyed-in-the wool Flying Fifteen diehards, Campbell Alexander and Jeremy Kriek, are difficult to keep out of their boats, especially Alexander who at an age where many have pensioned off their sailing boots, still actively sails a full rig Laser too.

As this year is the Flying 15 70th anniversary, they headed to the home of the F15 at Cowes to compete in a few regattas.

Yesterday they won the 70th Anniversary one-off race against some stiff competition, although it was their never give up attitude which ultimately won them the day.

“We won as the bitter enders who did not give up in light weather and current – we were last to retire and so were ahead at the time. It was the decision of Race Committee to award to us the win, much to our surprise. We had overtaken the boat that was in front shortly after the last mark!!” said Alexander.

“The only boat ahead of us after the last mark, was washed back by tide as the breeze dropped. They were hugging the shoreline and got stuck on the putty, so retired after we had passed them. We went on for another 40 minutes or so and then we threw in the towel too” said Alexander.

The Queen Victoria Jubilee Cup winners trophy is magnificent as can be seen from the pic. 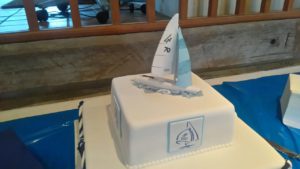 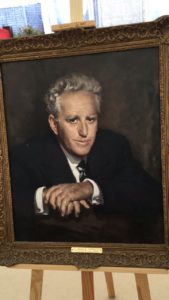 Uffa Fox – designer of the FF.

“It’s very interesting racing here at Cowes as we raced around permanent buoys, and the race was started by real guns from the shore in true old fashioned sailing spirit” said Alexander.

They now go on and sail Cowes Week for the remainder of this week.