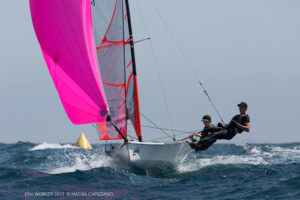 Alex Burger and Benji Daniel have each previously done a 29er Worlds, but earlier this year they teamed up for the 2017 worlds – and ultimately won it in fine style too! Alex was on trapeze and Benji on the helm.

They had intense training sessions in both Durban and Cape Town, and were expertly guided and coached by Roger Hudson of RaceAhead. Plus several other sailors trained with them to give them valuable boat-on-boat experience – all of which obviously stood them in good stead.

Burger started sailing at the age of 7 in an Optimist, and competed internationally, but without any significant results.

He ultimately progressed to the 29er and has competed at 3 Youth Worlds, with the 2013 event seeing he and David Wilson finish a very credible 8th overall, and he was immediately recognised by the RaceAhead programme, and was included in their training sessions. In 2014, Burger together with Asenathi competed in Kiel Week on a 470, and had Roger Hudson as coach. They finished 5th overall. The following year they again teamed up the 470 Junior Worlds and Open Europeans where they finished 13th and 28th respectively with two solid Gold-Fleet results.

From there Burger teamed up with Asenathi Jim, Roger Hudson and Taariq Jacobs for the SB20 World Championships on Lake Garda, Italy, where they were 4th overall.

Back on the 470 he teamed up with Brevan Thompson for the 470 Junior Worlds – scoring a good 2nd place overall in the silver fleet.

He has also been at the Olympics with Roger Hudson and Asenathi Jim where he was manager/coach – so his experience is broadening rapidly for such a young man.

His future is bright, and we will see lot’s more of him in the future.