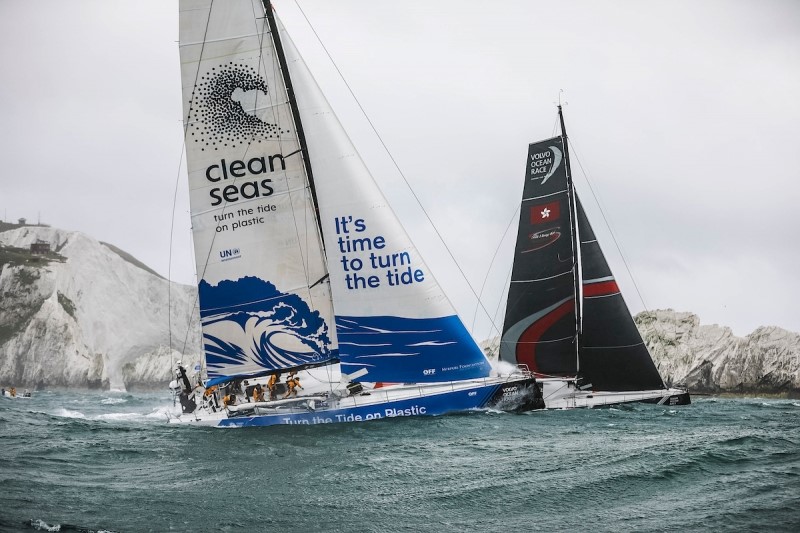 The seven boats in the last Volvo Ocean Race collected new scientific data during the nine-month fully-crewed, round the world yacht race.

This helped increase scientific understanding of the impacts plastic pollution and other human activity are having on ocean health.

The award was presented during a ceremony held at the boot Düsseldorf International Boat Show.

Panel judge Frank Schweikert, Chairman of the German Marine Foundation, said: “The programme was groundbreaking and set new standards in global awareness of the dramatic levels of pollution in the oceans.

“This was a perfect symbiosis between water sports and science.”

Anne-Cécile Turner, Sustainability Programme Leader, accepted the award at the ceremony, attended by Prince Albert II of Monaco who was representing his foundation.

She said: “The Science Programme was an innovative and collaborative effort involving sailors, scientists, partners and a whole host of others concerned about the ocean and keen to advance our understanding of the problems it faces.

“By working together we were able achieve the objectives of educating, innovating and leaving a lasting legacy and are proud that this has been recognised by the Ocean Tribute judges.”

This is the third win for the programme after it already proved successful in the ‘Sports CSR Campaign of the Year’ category at the International Sports Awards and in the ‘Best Corporate Campaign or Initiative in Sport for Good’ category at the Beyond Sport Awards.

An expert scientific consortium, funded by Volvo Cars, used cutting edge technology to build state of the art equipment to capture the most relevant ocean data.

This included information on the global spread of microplastics, how a changing climate is affecting ocean health and, through the deployment of drifter buoys, ways oceanographic data can improve our understanding of the link between the ocean and weather patterns.

The scientific analysis was spearheaded by GEOMAR Institute for Ocean Research in Kiel, Germany, funded by the Cluster of Excellence Future Ocean.

The data has been uploaded to a National Oceanic and Atmospheric Administration (NOAA) database where scientists are able to access it open source.
Other oceanographic data is being utilised by the World Meteorological Organisation and UNESCO’s Intergovernmental Oceanographic Commission.

After the Turn the Tide on Plastic and team AkzoNobel boats collected seawater samples, 86 in total during the race, they were analysed for microplastic concentrations in the GEOMAR laboratory using a powerful Raman spectrophotometer. Studies found 93% of those analysed contained levels of the particles.

Stuart Templar, Head of Sustainability, Volvo Cars, said: “Volvo Cars is proud to have supported the Science Programme, which has produced an unprecedented picture of the health of our oceans. In particular, this clearly shows the extent of the global problem of micro-plastic pollution.

“Decisive action needs to be taken, including by business. That is why Volvo Cars has made a number of pledges during the Race, including removing single use plastic by the end of 2019 and ensuring that at least 25% of the plastic in new Volvos is made from recycled material by 2025.”

Todd McGuire, 11th Hour Racing Program Director: “It is wonderful to see how the Science Program is gaining international recognition and applause, extending the legacy and vision of the race in relation to plastic pollution and ocean health.

“Utilizing sport to gather important scientific data is quite a novel concept, and the work carried out by the teams involved in the Volvo Ocean Race is helping fill a critical gap of information in very remote areas which would be otherwise difficult and very costly for scientific surveys to reach. Moreover, it is important to highlight that the data collected by these samplings is shared with international open-source databases. We are proud to support these efforts that align with the mission and strategy of 11th Hour Racing, which is highly invested in solutions, innovation and positive impact.”