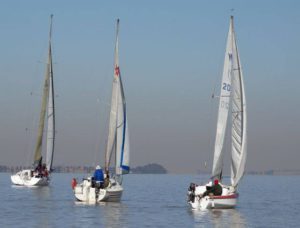 And we’re off. The first sailed event of the 2017-2018 NKA Grand Prix Series has been completed after the Presidents Race in May was abandoned due to no wind.

It was a perfect day for sailing. Balmy sunny weather, a gentle breeze and twenty boats on the start line. It was wonderful to see so many sailors out there. I am sure the majority of the sailors out there would have preferred the wind to pick up another 5 to 10 knots, but we don’t always get the whole recipe right.

Congratulations must go to our big boats who had a major tussle up front for the coveted Line Honours title. This was snatched up by the first multihull – Manny Raposa on his Dragonfly. The first monohull was the Leisure 42 ‘Excalibur’ skippered by Craig Schweitzer. I am sure the crew on ‘Excalibur’ were very happy after sucking up Fast 42 ‘Baleka’s’ dirty winds for much of the race. ‘Baleka’ managed to lose their grip on the race shortly before the finish line allowing not only ‘Excalibur’, but the Farr 38 and a bit, ‘Madam Pazzazz’ past them.

The day however, belonged to the small boats and the final accolades went to the Holiday 23 ‘Freya’ skippered by Alan Foden who finished in a well sailed first place. Formula One, ‘London Calling’, skippered by Vaughan Klibbe finished in second place. Ian Harvey on his Mistral ‘Dream Two’, dropped all his sails and was about to turn for home before he realised that the finish line was only a few hundred metres away. He gamely hoisted all his sails and sailed on to finish in third place on handicap. I wonder what his finish place would have been had he not had the slight break in proceedings?