Following an active discussion with World Sailing, the NYYC are developing a new, global, invitational keelboat team race to be sailed October 4-7, 2018 at NYYC Harbour Court in Newport, Rhode Island.

The event is planned as a ‘2 v 2’ team race, sailed in their fleet of identical Sonars. Their goal, beyond a great regatta, is to demonstrate to World Sailing the global interest in adult, keelboat team racing and to provide a proof of concept for both a future World Championship and continued support to see team racing as an Olympic event. 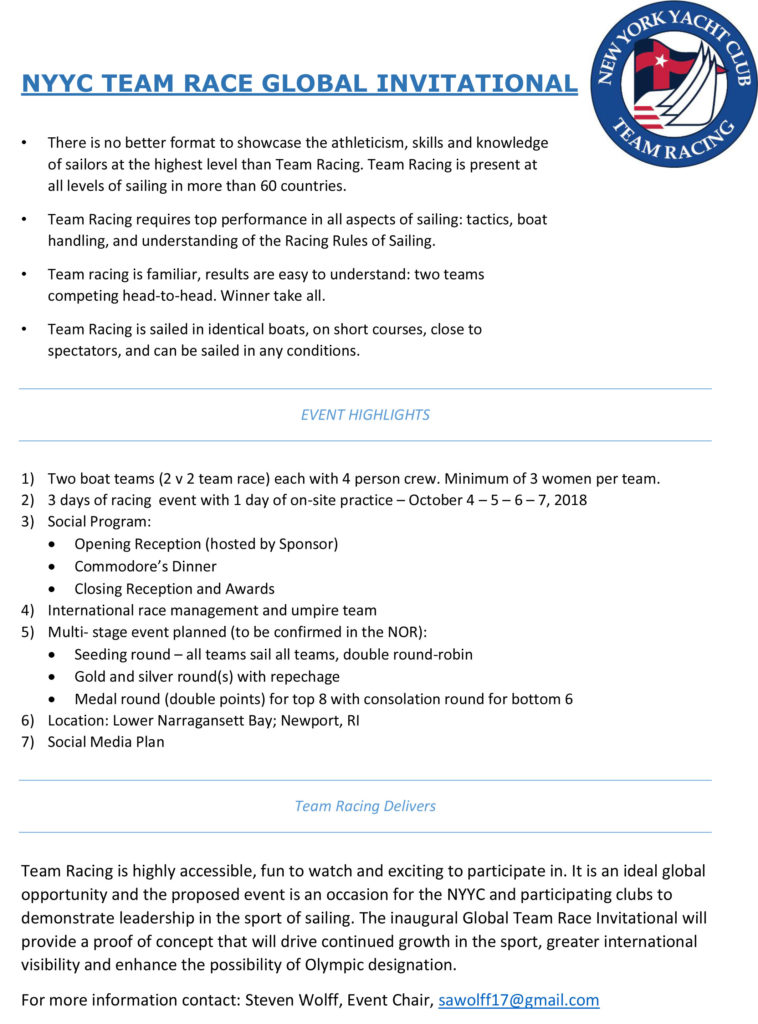 NYYC has been actively involved in team racing at all levels for many years. Their teams have participated in events around the world and they host 3 major annual events each season.

The Morgan Trophy is the de-facto North American keelboat team race championship. The Hinman Masters regatta is recognized globally for its top level of competition and their Grandmasters event became the prototype for racing across the United States which now culminates in a season-long champion.

Better than any other format, team racing promotes friendships, activates learning and tests skill. Even more importantly, it is highly social and promotes lasting relationships between clubs and individuals.

The new regatta has been formally approved by the NYYC Flag Officers and They want to gauge clubs interest in receiving an invitation. It is their intention to invite primarily clubs from outside of the United States. There will be an entry fee of approximately US$2,250 per team to cover boat charters, race management and social functions for team members. Teams will be responsible for their own transportation and accommodation, though they will identify discounted accommodation in Newport or even possibly at Harbour Court. Additional information can be found on the flyer attached.

If your club is interested in receiving an invitation, please click this link (INTEREST FORM) and complete the indication-of-interest form by February 15th. Fifty percent of the entry fee will be required to be paid by March 15 to guarantee a place in the event which is certain to be oversubscribed.