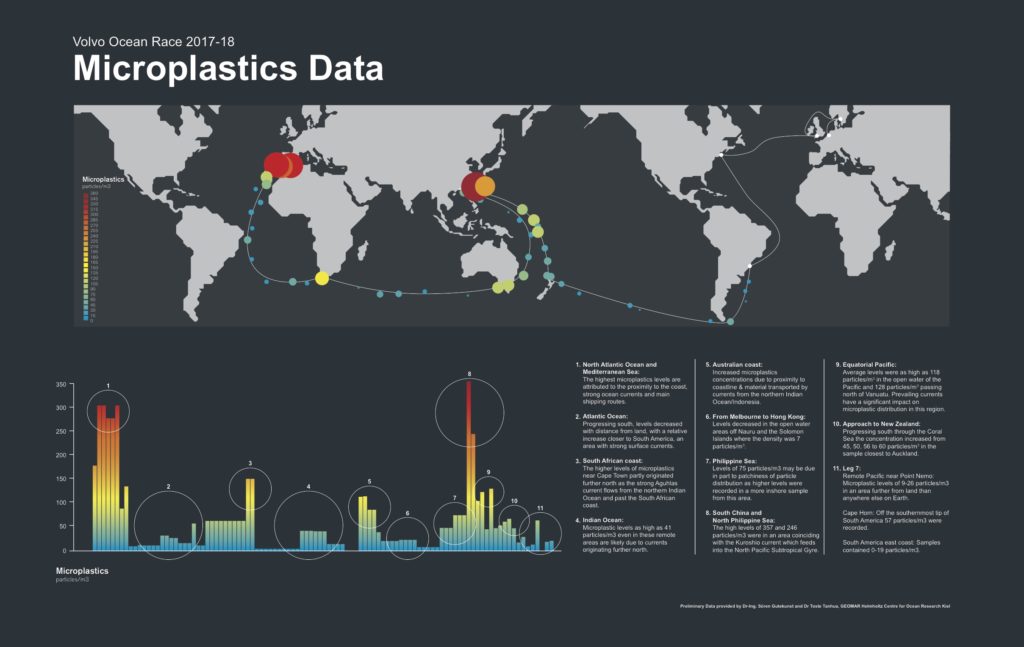 The samples were taken close to Point Nemo, the furthest point from land on Earth, where the nearest humans are on the International Space Station.

The Volvo Ocean Race Science Programme found levels of plastic in areas of the Southern Ocean that have never before been tested.

The groundbreaking data is set to be released today (18th May) at the Volvo Ocean Race Ocean Summit, which explores the issues and solutions to the plastic crisis, at the Race stopover in Newport, USA.

The findings show that close to Point Nemo there were between nine and 26 particles of microplastic per cubic metre. As the boats sailed close to Cape Horn, off the tip of South America, measurements increased to 57 particles per cubic metre.

The highest levels of microplastic found so far, 357 particles per cubic metre were found in a sample taken in the South China Sea, east of Taiwan, an area that feeds into the Great Pacific Ocean Gyre.

Dr. Sören Gutekunst of GEOMAR Institute for Ocean Research Kiel, funded by the Cluster of Excellence Future Ocean, analysed the preliminary microplastics data at the laboratory in Kiel, Germany.

He said: “This is the first ever data that the scientific community has been able to analyse from a relatively inaccessible part of our blue planet.

“Unfortunately, it shows how far and wide microplastics have penetrated our vast oceans and that they are now present in what, until now, many have considered to be untouched, pristine waters.”

The measurements were collected on the 7,600 nautical mile leg, the longest in the Race, from Auckland to Itajaí on both the Turn the Tide on Plastic and AkzoNobel boats.

The boats also collect other oceanographic data measurements including temperature, CO2, salinity, algae content which gives an indication of levels of ocean acidification.

Anne-Cecile Turner, Sustainability Programme Leader for the Volvo Ocean Race, added: “Such information is extremely valuable as it helps fill in the large gaps in our understanding of how plastic breaks down over a number of years and is spread to the ends of the earth by ocean currents.

“It’s also a stark reminder of the pressing need to tackle this plastic crisis head on and governments, businesses and individuals all have a role to play in addressing the problem.”

Point Nemo is so far from land that the nearest humans are often astronauts on the International Space Station, which orbits the Earth at a maximum of 258 miles (416km). Meanwhile the nearest inhabited landmass to Point Nemo is over 1,670 miles (2,700km) away.

Jeremy Pochman, Co-Founder and Strategic Director, 11th Hour Racing, Founding Principal Partner of the Volvo Ocean Race Sustainability Programme, said: “For so long, we have treated the oceans as an inexhaustible resource.

“The data we find here from onboard the boats show that microplastics are found in the most remote places on Earth, a clear sign that all our oceans are under great pressure. “

“This is open-source data, available to the public, and easily used to highlight the dangers of single-use plastic. It is one point of engagement in the conversation about solutions toward a circular economy.”

The information comes from the Volvo Ocean Race Science Programme, which has brought together an elite scientific consortium to capture data that will contribute to a better understanding of the world’s ocean and climate.

Microplastics are often invisible to the naked eye and can take thousands of years to degrade. By collecting information on their levels, the mission is helping scientists gain insight into the scale of plastic pollution and its impact upon marine life.

Stuart Templar, Director, Sustainability for Volvo Car Group, said: “Volvo Cars is proud to be supporting this innovative research project into the global problem of marine plastic pollution. This latest data shows that the impact of human behaviour has reached the most remote areas of our oceans. The time for inaction is over.”

The Volvo Ocean Race Science Programme is funded by Volvo Cars, who are donating €100 from the first 3,000 sales of the new Volvo V90 Cross Country Volvo Ocean Race edition to support the initiative.

The Science Programme is a partnership in collaboration with 11th Hour Racing, the Mirpuri Foundation, and other main partners, Volvo, AkzoNobel, Bluewater, Stena Recycling and Ocean Family Foundation.