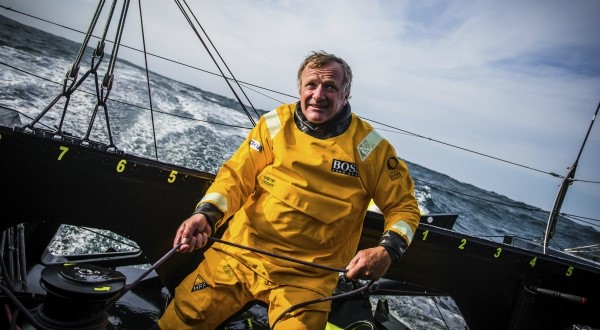 British sailor Neal McDonald has been involved in seven Volvo Ocean races. After being Performance Manager to the Ian Walker skippered ‘Abu Dhabi’, winners in 2014-15, McDonald played a similar key role on the last Volvo with Xabi Fernandez’ ‘MAPFRE’ team. He has been full time with Alex Thomson Racing since last year, but has known and worked with Alex on a project basis for the last three or four years. McDonald, now 55 years old, has been announced as co-skipper to sail with Thomson on the new ‘Hugo Boss’ which is completing building in England and due to be launched in June/July. An unexpected choice – not really.
Tip & Shaft spoke to Neal.

So, Neal, a big challenge for you? How did the choice of you as co-skipper come about?
It is not what I signed up for when I joined up last September, but it is a very exciting added bonus. There were a number of things going on. My role with ‘Hugo Boss’ is kind of multi-faceted and multi-tasking and I have ended up spending more and more time with Alex himself. It has been clearer and clearer that sailing time on this new generation of boat is at a premium going in to the Vendée Globe and we just want to make the best of the time. So it is a big bonus to us as a team to have us both on the boat for the whole race. There are two sets of eyes from the ATR/Hugo Boss team looking at every aspect of the new boat which will be very early on in its life during that race. I did a lot of sailing on the existing, outgoing boat. I have just done 6,000 miles on it in the last month. I did a lot with Alex before the Vendée Globe, I did a lot of testing before the Route du Rhum and I have just brought the boat back from Mexico.

So did you volunteer, put your hand up, or were you press ganged? Tell us.
It came about mutually. I never pushed it, it evolved naturally. It made sense. There was no moment of epiphany. We have a performance meeting with a small group of us. Six months ago we were meeting and it was we need to decide who will do the Transat Jacques Vabre with Alex, and kind of then we made a short list and my name was put in the hat. And the more we looked at it the more it made sense.

Describe your actual role with Alex and the team, do you have a job title and description?
I think my title is performance manager. But basically I stick my nose into anything I feel is performance related. So that can be autopilot development, sail development, I get included in all the aspects of anything to do with performance. The only thing I shy away from is anything to do with money, unless someone comes and says ‘where do you think we should spend the money?’ then I try and give some guidance. All matters of performance I try and be as much of a sounding board for Alex as I can. We have very different sailing backgrounds, but we have so much mutual respect. There are lots of times I am prepared to stick my neck on the line and question decisions. He may not accept my point of view, but it brings a different viewpoint to the table. 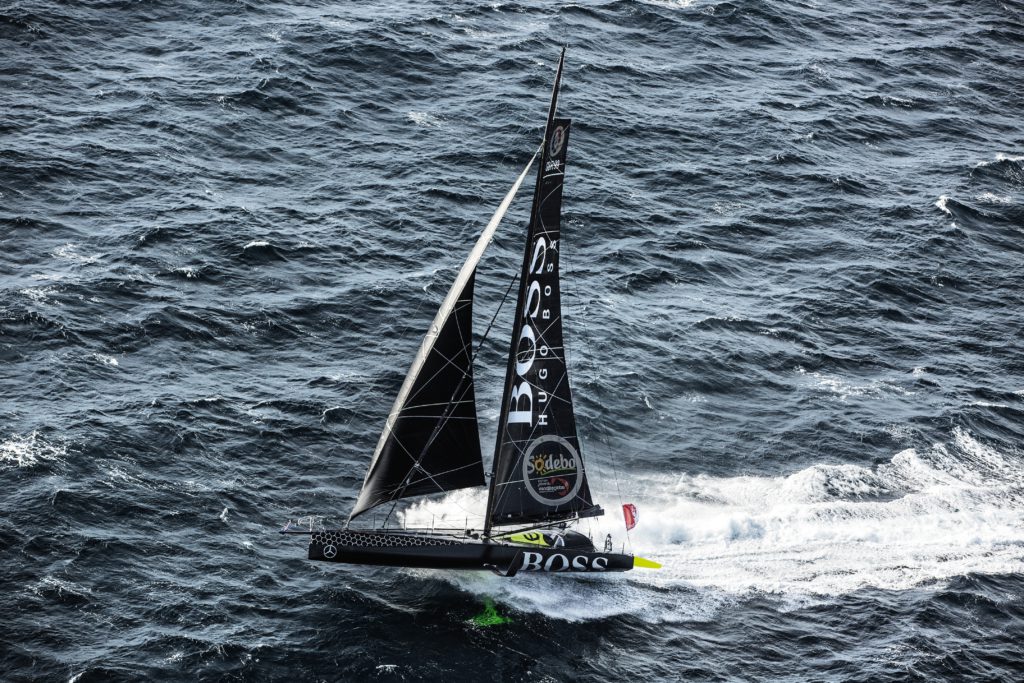 Compare where you expect the new ‘Hugo Boss’ to fit into the performance spectrum of this new generation of boats, compared to the arrival on the scene of the existing boat during the build up to the last race? Will it be a game changer to the same extent?
I am really unsure about where all the others are. I have put so much energy into this boat that even if other boats were out there sailing a great deal I would not have a great deal of knowledge. This new generation will not have done a lot of miles. We are not full of knowledge about the other teams, but by comparison to last time then the discussions (on the dock) were whether the foils would work at all! There is a bit of an unknown at the moment, but the TJV will answer a great deal of questions.

Charal appeared a year ago, how much of a step on will the new boat be from her and others?
Some aspects will be familiar. I do expect all the hulls to look reasonably similar, the block coefficient if you like, I still imagine there will be a variety of foil solutions, that is where the advances will be.

And what is your sphere of influence in the design process?
A lot of my energy is about looking at reliability. Alex really has a very strong team which has been involved with this class a lot over a long number of years. My background is sufficiently different that I can look at things with a new viewpoint. Reliability is such a big issue in a class which has such a big rule set, it tempts people to make boats lighter and lighter then reliability is a massive challenge.

So you are the good cop, the conservative one when it comes to setting boundaries?
I am probably more on the conservative side. Ross (Daniel, technical director) has a massive knowledge and has been with Alex since the very beginning. I am more conservative in most areas. I spend a lot of time looking at the rig studies. A lot of drawings I don’t check and recalculate, but I see most drawings as they do pass by me.

So are there opportunities for significant gains in the aero set up, the rig and sails?
The one design rig has been a great move forwards for these boats. There is a lot of energy and a lot of money being spent, of course it was the Achilles Heel of the class, but I do think a lot of the energy spent I research and development will be reliability. It will be knowing how to push the boat, because all of the new foils will be pushing righting moment which will pretty challenging for the rig. That whole thing will be a key part of the game.

You have such limited time between launch, the Fastnet and the TJV, how do you make optimal use of these days, these hours?
We are talking about it all the time. But if we had ever targeted winning the TJV three years ago we would have had the boat coming out of the shed earlier. The goal for us is the Vendée Globe and our timing is good for that, but the corollary of that is that, yes, it will be a bit of a rush. There will be things we will have to short cut on and for sure it will be a bit of a flap. We’d love more time.

Do you expect to be competitive off the bat in the TJV? Is that reasonable with a new boat?
You can’t help but try to be competitive, we want to do well in the race, but the major goal is the Vendée Globe. We punch for that and this is a stepping stone and we need to be competitive to be able to judge other people’s boats. It won’t be an easy balance.

And after the TJV…in to the shed or sailing?
We want time on the water. That is the massive bonus. So after the Transat Jacques Vabre (TJV) ocean miles will be important. We are clear on that. But we have been so lucky to have the old boat which has, yes, been doing a PR tour, but that has been 12,000 miles of useful testing over the last few months. So we will be doing miles with the new boat looking at where we can make improvements, you can’t over emphasize reliability.

What about your age, you did not sail actively in the last Volvo?
In terms of age, it would have been so nice to be one third of my age, but we can’t do anything about that. I hope it won’t be an issue. I will be hurting, there is no doubt about that, but I see plenty of older people doing well in these races so I am not too concerned. Hopefully cunning and canniness and experience will count for a lot. I am trying to do a bit more, but it is very hard to fit it in because I have so much travelling at the moment. Of course I am conscious of that and will have to step up. But I got in good shape with the ‘MAPFRE’ team, I have let it go a bit, but I can get back to it.

And could we see you sailing in the Ocean Race?
I have not looked that far ahead. I did not sail on ‘MAPFRE’ in the end during the race, I think it is unlikely. I would like to be able to be involved in some capacity, but right now the focus is Vendée Globe.

What about the transition of the Ocean Race to IMOCA?
I have mixed feelings. I love the class and the Volvo Race has a long history with me. I see some good things and some bad things. It is not going to be a smooth transition for sure, but really I have not taken a lot of interest right now. I have sold my soul to this project and that is where 99.9% per cent of my time and energy goes. I don’t think there are many confirmed entries at this stage – there never are at this stage – I think the boats will be a challenge for a team to get around the world in one piece with a team. That will be an interesting concept, a change of approach for the crewed sailors.

And if Alex carries on to do The Ocean Race?
I am part of his team and if he carries on with an Ocean Race project then I will be very interested, of course. I have not been involved in these conversations and we have not really talked about it a great deal. We are heads down. This is a very busy, busy time in the Vendée Globe cycle.

In terms of design could the new boat go on and win The Ocean Race?
I am sure it could. There might be some design decisions you would have made differently, but even then we don’t even know the full course yet. I have an idea. You might focus attention on other points of sail than the Vendée ‘classic course’, but this boat will be certainly able to win it, whether it would be as competitive as a pure Volvo design I don’t really know – sorry Ocean Race, I can’t get used to the new name.

And you spend so much time with Alex, how is he at this stage of the cycle?
Alex barely gets time to sit down. He sailed the boat back from Mexico. I did other bits of it. We were testing all the time, all sorts of things. Alex or myself were on the boat the whole time. I can’t say what we were testing. But it has been a golden opportunity to test things as we have been building the new boat, an advantage other teams will not have had.