It just seems that this regatta gets better and better every year which is why it has stood the test of time and now chalked up the 30th race, and all the while with Club Mykonos aboard as the sponsor.

Certainly chatting to people over the weekend, there is a lot of praise and positive comment for the event and venue, with much of the talk centred around the newly developed waterfront restaurants and party area, with the Kaapstad Brauhaus being the focal point of the social activities and prize giving.

There is one man who has done all 30 races to Mykonos – with Ted Kuttel being presented a special award for this achievement. 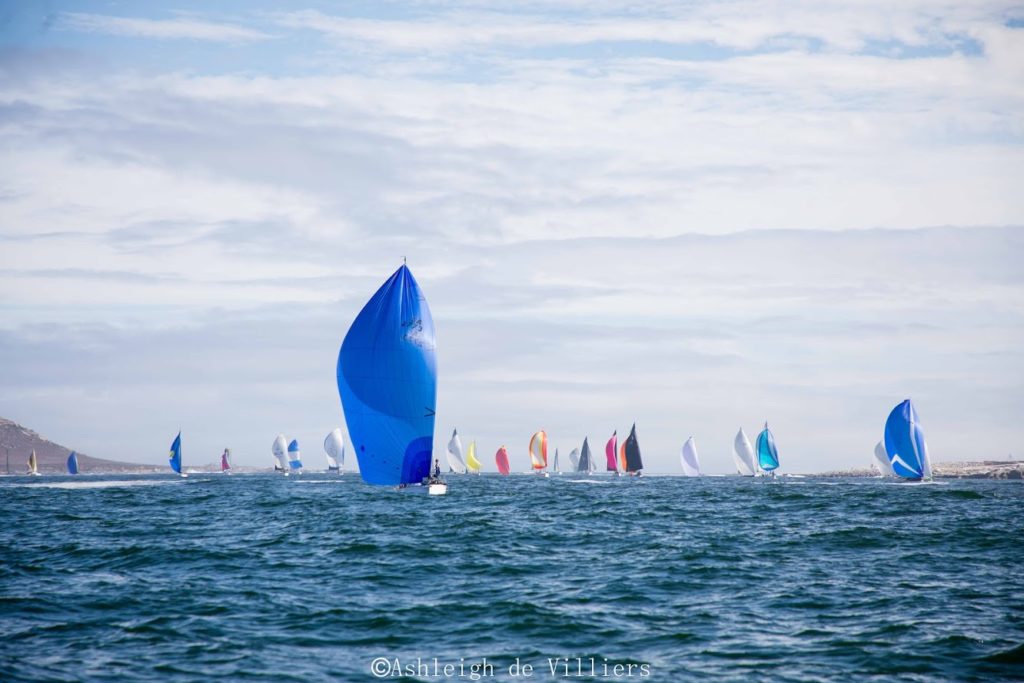 The race from Cape Town started off in very light conditions – that’s if almost no wind can be described as light wind! Slowly but surely the fleet made way and as the day progressed, so the wind increased in speed, with the leg from Dassen Island to the finish being an exhilarating one under spinnaker. Those who chose the offshore option, paid a heavy price though.

Line honours went to Phil Gutsche’s ‘Warrior’, although a bunch of Cape 31s were hot on her transom with ‘Nitro’ just 7 minutes back from ‘Warrior’.

It should come as no surprise that the first 8 boats overall on handicap in Class A for that leg, were all C31s. These are top crew who sail these beautiful cutting edge speedsters to the very edge of perfection.

Class B was won by ‘Sheshisa, a Bavaria 38, skippered by Lood Rabie. Vitor Medina in Class C took the overall honours in his Miura, with Greg Davis taking the multihull honours in that first race.

The pursuit race around the Langebaan Lagoon had to be postponed due to the very light winds on Saturday, but again patience prevailed and the wind finally materialised, giving the fleet a great race in great conditions.

The winner was Patrick Holloway’s ‘Hollard Jacana’, but again a string of C31s took the next 5 places, so it came as absolutely no surprise to anyone that when the points were tallied the overall monohull winner of the two races combined was Mike Hayton & David Rae’s C31 ‘Nitro’, with the top 5 places overall all being C31s.

The combination of a distance and a pursuit race coupled with world class facilities for socialising, there is no reason to believe that the Mykonos Offshore regatta won’t simply keep rumbling along forever. Well done to the RCYC, Club Mykonos and all who make it happen so well.