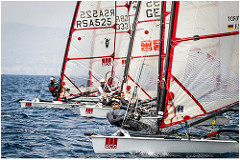 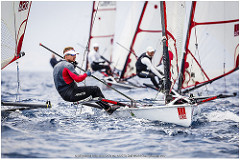 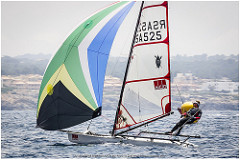 South African sailors are dominating the Musto Skiff Worlds being sailed in Spain.

Well, let me first get this strait as Bruce Keen is sailing for the UK, although he is originally a Capetonian so we can ‘claim’ him. He is second overall and has won 1 race so far. Plus he is a former World Champion in the class.

Andrew Tarboton, the product of KZN sailing and Henley Midmar Yacht Club is a ‘wholly owned’ Saffer! And he’s lying 3rd overall in a fleet of 63 boats. He has also won two races so far of the 9 sailed.

Tarboton did not start the regatta by covering himself in glory as he was black-flagged (BFD) in the very first race, but he has recovered and is well on his way to a top result.

Bruce Keen on the other hand is a model of consistency with all races in the top 10.

This is how the PR people reported on race 4, the first race that Tarboton won:

“Race 4 was away first time a couple of minutes after the official start time of 13:00 in 10-12knots of westerly sea breeze, with the fleet splitting with some competitors choosing left towards the shore, others heading out right towards Palma and the remainder working the shifts up the middle of the course.

“Andy Tarboton (RSA 525) led at the windward mark followed by Dan Kilsby (GBR 302) and countryman Ben Schooling (GBR 544). At the finish Tarboton had extended to take the win from Frithjof Schwerdt (GER 484), who in turn had sailed impressively to pull through to take 2nd from Kilsby, with Schooling, Hill (AUS), Ahlmann (GER) and past World Champion Bruce Keen (GBR) in the top group.”