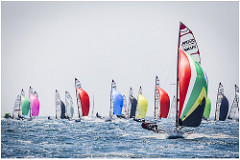 The sea breeze put in its best performance so far on day 5 (Thursday) with great 14- 18 knot breeze and a good wave pattern giving the boats plenty of opportunities to leap down wind. 3 races were sailed.

Race 10 started in 14 knots of breeze under P flag as there was an individual recall and no-one returned!

At the first mark Robertson (AUS) had a healthy lead with a chasing pack headed up by Bruce Keen (GBR/RSA), Poston (GBR) and Schwerdt (GER). Tarboton was 7th and Sean Thijsse (RSA) was 37th.

A lap later Robertson still held the lead, but elected to gybe set at the windward mark to keep a clear lane downwind; however the chasing group bore away set and went right and this gave Keen the opportunity to overtake; Robertson held on to second with Poston (GBR) pulling through to take 3rd.

Race 11 started in a building 16-18 knots, which saw Keen take 2nd place and getting ever closer to top spot. Tarboton was 11th and Thijsse was 45th.

The final race of the day; race 12 was started under P flag and again the fleet got away cleanly. It was not the best of races for the South Africans as Keen was 9th, Tarboton 10th and Thijsse 40th.

The championship is looking like a two horse race from here as Keen has closed the gap on Schwerdt at the top with his lead now just 6 points.

Tarboton remains 3rd overall, although the chasing pack from 3rd downwards is so tight that no-one is counting points and will be focussing on their own performances on the final day with 2 races scheduled.