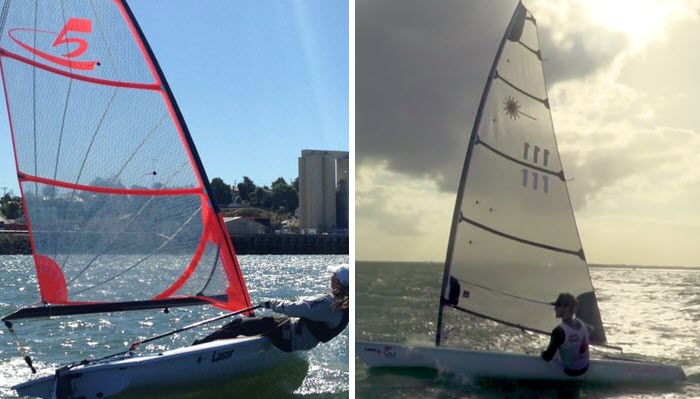 A good relationship between one design classes and their builders is vital for the success of class associations. Reliable supply is good for the class members while a poorly administered class is bad for the supplier. Everything is either win-win or lose-lose.

A variable all class organizations face is change, and the International Laser Class Association (ILCA) may be the most conservative of them all. Born as a simple boat with basic rigging, the ILCA has demonstrated a pattern of controlled, incremental evolution and development aimed at improving longevity, increasing the ease of use and reducing the cost of ownership.

Nowhere is that more on display than in the development of a new mast and sail combination to modernize the 50 year old design.

“When you see the C5 rig on a Laser hull for the first time she is like a lady with a new dress – wonderful and looks fast,” reports Ken Hurling, president of the Australian Laser Class Association.

While the class has previously allowed for updates to the rig, the C5 is a radical change. All carbon spars, skiff-like laminate sail, transportable as checked airline baggage, the C5 is a significant step into the future.

The motivation stems from class enthusiasts eager to gain and retain customers, particularly those aging out of the Optimist Class. Beyond the undeniable sex-appeal of the rig, its usability allows for lighter weight sailors to be more competitive than the current rig allows.

At the ILCA World Council meeting this past November, following a progress report on the rig, it was agreed that real world experience was needed to expose weaknesses. In the case of a new rig, that meant putting it in real racing situations and exposing it to youth programs where the equipment will get treated “without respect”.

So the World Council approved a plan put forth by the Australian and Japanese builders to introduce 100 C5 rigs into programs in those countries over the next 9 months as a way to do large scale testing. A nice side product of this test program will also be the ability to gauge potential demand.

What follows this test program will be a detailed presentation to the ILCA World Council at its annual meeting in November 2019 where it can then decide if, how, when, etc., to introduce the C5, where this would be done as a new, independent class in the same way both the Radial and 4.7 were introduced. At this point, there is no plan to replace the current rigs.

If the C5 were to be introduced and it gained traction, the next step may be to introduce variants in the same model as this new rig, thus gaining different size sail plans to serve the weight range much like the current approach of the Laser Full Rig, Radial Rig, and 4.7 Rig.

The C5 is sized for the youth that has aged out of the Optimist, with the driving presumption that when they are ready to move to a larger rig, they would likely prefer to stay with the same type of rig, and if that is done by changing one spar section to allow for the next bigger sail, the price to move up would be much less than that required to by purchasing a complete rig (upper, lower, boom, sail, battens plus rigging).

But nothing is ever this simple.

Muddling the waters is how the ILCA is in the midst of proving the boat deserves to remain as the singlehanded equipment for the Paris 2024 Olympics. This gradual roll-out of the C5 Rig is not on that timeline, which translates to modern rigs being used at the club level while Olympians continue with a dinosaur sail plan.

Additionally, LaserPerformance, which is the exclusive equipment supplier to Europe and North America, has launched its own initiative toward designing a modern sail plan. While this allegedly caught the ILCA and the other licensed builders by surprise, it was their effort to combat changes in the marketplace:

Here’s an update from Bill Crane, Chairman of LaserPerformance:
In 2008 we proposed to the Laser Class that the Laser needed to evolve as the current rig was essentially the same as when the boat was first launched. When the sail was upgraded and the boom vang and cunningham made more powerful, Laser sailors learned that they could induce mast bend through the cunningham and they could, to some degree, “vang sheet” the mainsail which allowed better control of the shape and attitude of their sails.

While this technique provided better performance on the race course, it came at a cost as the sails and spars were really developed for a simple 3:1 Vang and Cunningham. Suddenly we were facing bent spars and a much lower than expected sail life.

The class did respond by developing the MKII sail and a composite upper spar that you see today. These were good improvements, but did not fully address the issues of spar and sail longevity, as well as providing the sailors with a better experience on the water. But the class did not agree with our proposal in 2008 as they have a very strict policy in regard to evolution and maintaining parity between old and new equipment.

We were aware of the rig program being developed in Australia, but like most developments for the Laser, a builder takes on an initiative that either came from their own thoughts, the class, or from a need proposed by the sailors. The builder then shares what they learn with the class. If the class like what they see, they can vote to implement.

In 2017, the LaserPerformance board agreed that we should initiate a new project to evolve the Laser and Radial rigs to take advantage of new materials and manufacturing techniques. We were keenly aware of the evolution of the Finn, Star, I420 and other international classes, as well as the introduction of contemporary single-handers like the Melges 14, RS Aero and Devoti D-Zero. The intent was not to replace the Laser or Radial, but to offer our consumers something new that addressed the issues of weight, longevity, control and the overall sailing experience.

Further, we wanted to expand the weight range of the sailors. The Japanese Laser builder had for years been explaining that many Asian women were at a disadvantage because the Radial favours a larger body type more typical to Europeans and Americans. This and a whole lot more went into our design brief.

This was all information that we came by from sailors, the class, our dealers, as well as our sales, marketing, warranty and manufacturing teams – so it was not as if we were working in a vacuum, we were just not ready to publicly share our information until we had met our objective.

Once we had our brief, we set about developing our team. Our first contact was Scott Ferguson. Scott is a well-known naval architect with a specialty in spar design. He is also a multiple Laser Master World Champion. We relied on Scott for our new rig design. Scott worked in concert with Robbie Doyle, founder of Doyle Sails and a well-known Finn sailor, and the Doyle team in the development of the sails for our rigs.

Scott and Robbie worked with Any Ash-Vie and Tom Peters at Harken UK in the development of the proprietary hardware, and the spars themselves, that are integral to the new rigs. After testing from sailors such as Robert and Gintare Scheidt, their feedback sent us back to the drawing board and addressed all of their issues. The result being the ARC1 and ARC2 sails.

We are presently manufacturing 25 ARC1 and ARC2 rigs to circulate for testing by Laser and Radial sailors around the world prior to our launch into the marketplace. The class is now aware of the new rigs and will have the opportunity to test them shortly. We look forward to their feedback, and would be pleased if they are as excited about them as we are.

The intent of the ARC is not to replace current Laser Class equipment, as with over 215,000 Lasers out there sailing and racing, it would be incredibly unfair, (and probably impossible), to require sailors to change to the new rigs. ARC is simply an option for people who want something new and different. The ARC is a different sailing experience that addresses some of the issues we have with the present Laser rigs, and provides a vehicle for a bigger proportion of people to play on a level field.

I think it is too soon to tell what we will do if ILCA is not interested in the ARC. I think the trial period will help us all to develop a road map as to where the ARC is adopted. If sailors like it and want to race it, we will have to figure out how to make that happen.

Comment by Richard Crockett
Being a non-Laser sailor it’s difficult for me to comment on a class that is so successful internationally, and which still, to this day, provides really good close one-design racing.

However I have noticed that there are some real diehard dyed-in-the-wool types out there whose few hairs on their heads stand up and bristle at the mere thought of changes to the class. However a trial on the rig mentioned above may well bring a spate of new blood and new impetus to the class. Worth a try? In my book absolutely!