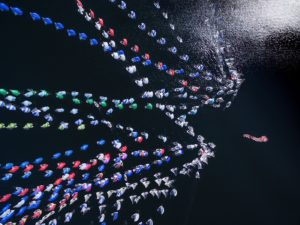 SEE ALL THE WINNING PICS HERE.

The international jury decided to honour German photographer Sören Hese and his surprising picture taken from a drone during the 5O5 German championships. Based in Berlin, Hese has been working as an independent photographer since 1990. “I am very proud because this contest is the absolute reference in yacht racing photography “, he said. “I took this picture using a time-motion-stack imaging concept, capturing the image basically as a time series from a quadrocopter. I found its graphical structure very interesting and also story telling, and so decided to submit it to the contest. I am very touched by this victory, against all those prestigious photographers. There were also so many major international events this year that I am really surprised to have won.”

Zita Kovács wins the Public Award, based on votes by the public on the social networks.