Mega-Schooner Match Race on the Bay of Naples 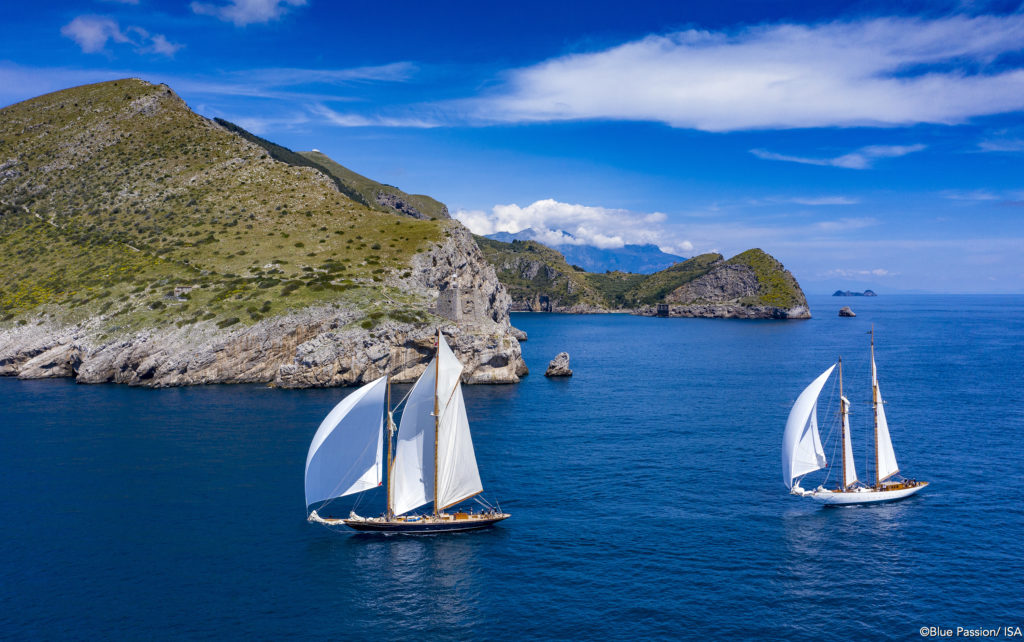 Mariette of 1915 leads Naema back into the Gulf of Naples.
Photo: Blue Passion/ISA

Out on a sunny but chilly Bay of Naples, there was a remarkably action-packed opening day of racing at the inaugural Capri Classica, with lead changes galore, a David v Goliath competition and an encounter with a Neapolitan fishing net best forgotten.

Racing on day 1 got away as the four schooners cautiously set off with the smallest, the 85′ ‘Orianda’, first to tack at the heavily favoured committee boat end of the line.

However it was the heavyweight bout between the 138′ Herreshoff-designed ‘Mariette of 1915′ and the 128′ ‘Naema’ that was most engaging. The two titans of Capri Classica were at each other’s throats from the outset in a match race reminiscent of a 19th century America’s Cup when schooners were the vessels of choice.

‘First Mariette of 1915′ gaining the upper hand through superior pointing ability to lead around the first mark to the south of Punta Campanella. They then returned to the Gulf of Naples where ‘Naema’ was able to roll her rival and pulled ahead down the tricky run down past Sorrento. However approaching the leeward turning mark beyond Sorrento the wind filled in from astern allowing ‘Mariette of 1915′ to close as she brought the breeze down with her. A handling error coming into the mark as gusts of 15+ knots descended on the race course, left ‘Naema’ bare-headed for a minute, a loss that was ‘Mariette of 1915’s’ gain, allowing the navy blue schooner to sneak through. 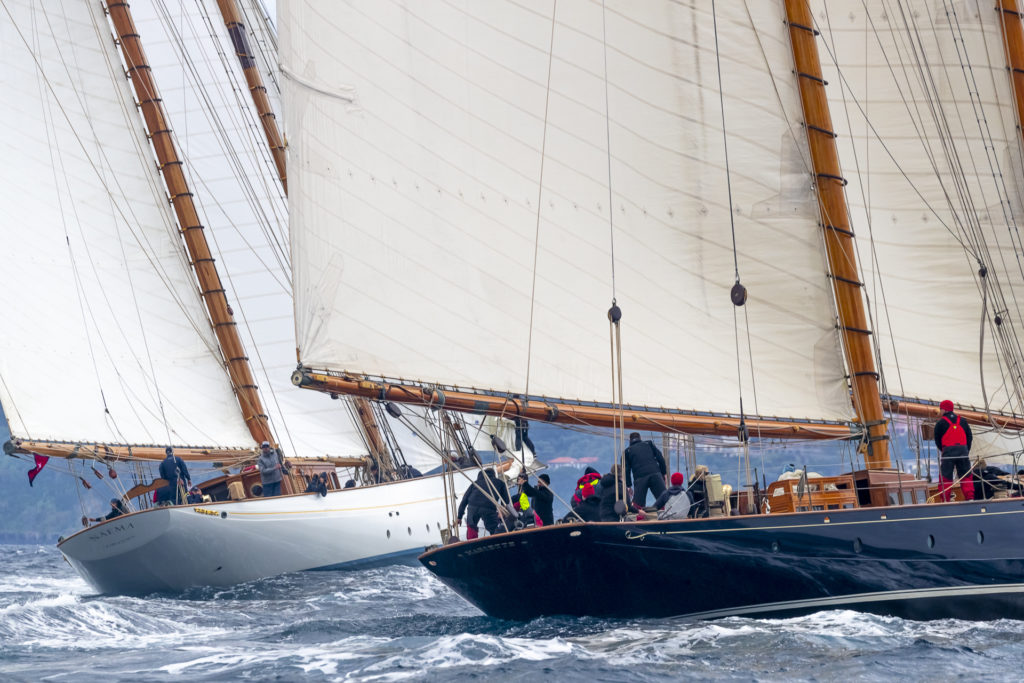 The mega-schooner match race between Naema and Mariette of 1915.
Photo: Gianfranco Forza

“Then there was a moment where we had to make a decision – do we follow them or do we do something different?” recounted Florian Franke, Captain of ‘Naema’. In the event ‘Mariette of 1915′ continued out into the Bay of Naples on port, as, now behind, ‘Naema’ tacked on to starboard heading back into the Sorrento Peninsula. This proved to be a winning move as Franke explained: “It was very shifty. The first tack we gained with a lot of lift. Then we got into pressure between the mainland and Capri as they went offshore and got a big header. I was surprised they didn’t tack back earlier – maybe they thought there was more wind coming.” Blessed by angels, ‘Naema’ regained the lead for a second time, lifted enough that she was able to point directly at what would be the finish line of the shortened course, as ‘Mariette of 1915′ struggled with her bow at one point pointing towards Naples.

As Naema’s helmsman Hank Halsted said, beaming: “Luck is good food – you just need to know when to take it…”

Behind, ‘Puritan’ and ‘Orianda’ were having a race that was slightly too close considering the relative differences in their 126′ and 85′ LOAs. It was discovered the cause was that ‘Puritan’ had picked up a metal fishing net that had wrapped itself around her drop keel. Certainly it made ‘Orianda’s’ performance look impressive.

To make the most of the big breeze on day 2, the race committee laid on a course taking the boats from the start area, due north of Capri’s Marina Grande, to a turning mark just south of Punta Campanella at the end of Sorrento Peninsula and from there back past Capri’s famous Faraglioni stacks and onto a clockwise lap of the island, finishing back at Marina Grande, where the boats are moored. The first two thirds of the race were especially lively.

In a reversal of fortunes, it was the turn of ‘Mariette of 1915′ with her smart navy topsides, that made the best start, immediately pointing higher than her arch-rival, the ‘Naema’. ‘Mariette of 1915’s’ superior upwind pace allowed her lead to increase as the frontrunners passed between the Sorrento Peninsula and Capri. By the time ‘Mariette of 1915′ rounded the first turning mark off Punta Campanella she was already some 10 minutes ahead of her rival.

“We had the right sails up today and that meant we were much more comfortable upwind,” explained ‘Mariette of 1915’s’ captain, Charlie Wroe. Out of the start line, ‘Mariette of 1915′ was flying her main topsail (and not her fore topsail) whereas ‘Naema’ was flying no topsails initially, but then hoisted by a topmast staysail. Benefiting from being first on to the run caused ‘Mariette of 1915′ to extend he lead as ‘Naema’s’ superior downwind pace was less evident perhaps due to her having less ballast and less stability than her rival in the big breeze. Certainly witnessing ‘Mariette of 1915’s’ 180 tonnes thundering downwind at 12 knots, under full canvas, including her fisherman, blasting apart the substantial seas that were otherwise hammering Capri’s southern shore, was a sight to behold.

As Wroe later enthused: “These are the best boats in the world to go sailing on – anything after this is not half as much fun.

“In breeze like we had today, everyone is amped up because it is more tricky getting the boat around the course. You change the crew configuration around a bit and put some more experienced people on the runners – which you don’t need on a calmer day – and two people on a job that would usually require one person.”

Aside from overstanding at the last gybe “to put a little in the bank” that allowed ‘Naema’ to make a small inroad into their lead, ‘Mariette of 1915′ sailed a near perfect race. After returning to a much calmer Gulf of Naples, in the lee of Capri, she comfortably won the day on handicap from her rival, levelling their scoreline at one-all at this half way stage of Capri Classica.

Bringing up the rear, ‘Puritan’ retired for a second day, and this left ‘Orianda’, the smallest of the four schooners at a mere 85′ long, to complete the course, coming home third.