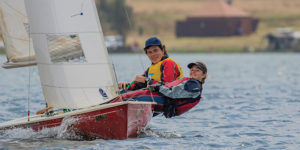 The fact that his crew, Ruth Avierinos, had never sailed before did not seem to bother him at all, and in his own quiet and very cheerful way he managed to teach her the skills of sailing, and together they took gold.

This is Jonathan’s second national title for the season as he won the Dabchick Nationals in December. He also holds numerous provincial titles. He just seems to win every regatta he sails – and just lives for his sailing.

Now that he has aged out of the Dabchick Class he will move on to 505s where you will also find him at the front of the fleet. He suffered a bit of a setback last year when he broke his arm. Even this did not keep him off the water as he climbed onto a rubber duck and coached the less experienced sailors.

This talented sailor loves the sport of sailing so much [/one_half]that he willingly shares his knowledge and enriches others. He is a worthy sailor of the month and someone who we will no doubt hear lots more about in the future