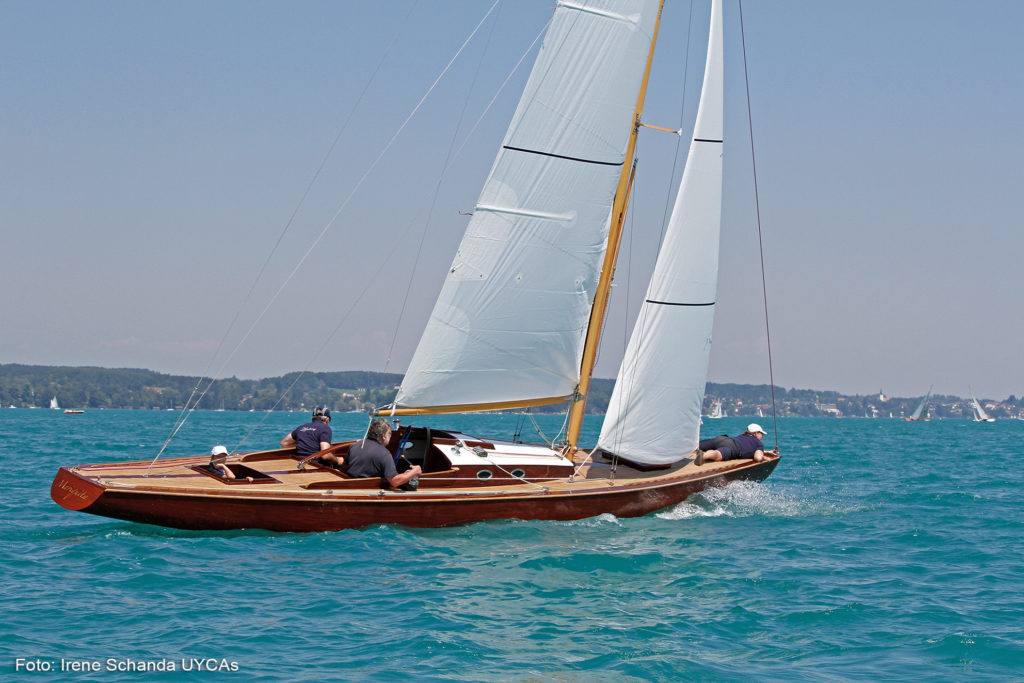 Now beautifully restore, Mariquita is back on the water and sailing again.

I will never forget the beautiful sight of the old 30-squares sailing as their long sleek lines and tall rakish rigs were simply graceful – what was there not to love!

One of my very early sailing experiences as a youngster was a short sail aboard a 30-square on Durban bay.

Over the years I have seen them slowly, one by one, disappear, with only the occasional historical pic or magazine article being the only glimmer of hope that they would not disappear altogether. An article in SAILING Magazine in 2001 was an indication that there were people out there in love with these graceful yachts, plus the wherewithal to restore them. At that time it was Mike Daly who was restoring Sonnet and Mariquita – and the article covered his love affair with these yachts and their restoration.

Between 2006 and 2011 Mike Baumann and his family lived in Cape Town, joined the RCYC and became avid sailors.

“My wife fell in love with the elegant lines of Mariquita, a 30-Square Skerry Cruiser” said Baumann. “The boat looked a bit tired, but we were convinced that with a gallon or so of paint, a stack of sand paper and some sweat we would be able to bring back the glory of this famous boat”.

In researching her history, they realised that there was no other boat which had won the Lipton cup more often than Mariquita, mostly under the capable hands of Wilfred Hancock, her first owner. 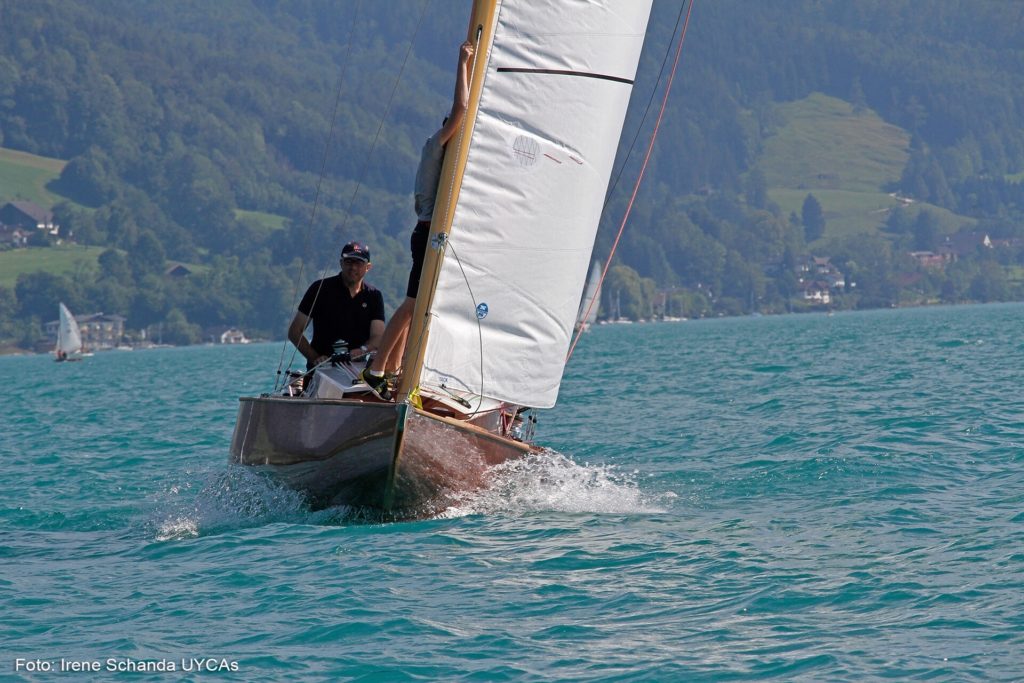 Mariquita with her proud owner Michael Baumann at the helm.

Baumann and his wife fell in love with Mariquita, and their first offer to her owner, Mike Daly, was turned down. Shortly after they left Cape Town and returned to Austria with Zeeslang, another historic South African yacht. A year later they attended a seminar on working on wooden boats, and this brought back memories of Mariquita. An out of the blue phone call was made to Daly, and he accepted their offer.

Mariquita was shipped to Austria where she arrived on the eve of his wife Stefanie’s birthday. What better gift could there be for a man to present his wife other than the 40-foot boat she loves!

Unfortunately, and very quickly, while unpacking the boat it became apparent that she was in a really bad state with many frames rotten and big cracks in the hull. They later found very larges rotten areas in the mast.

But the love affair with Mariquita was so strong that Mike and Stefanie simply had to sail the boat at least once in Austrian waters prior to wrecking her. “We waited for a calm day, put the mast up and sailed for 30 minutes or so very close to the shore in order to be able to swim home should that become necessary! I recall my son – back then being 12 years old – calling from below deck that he could see fish peeking through a crack” he said.

Mike seriously considered borrowing a chain saw and cutting her up, selling the lead and winches in order to curb his losses. But Stefanie vehemently opposed his economically driven ideas. Mike made numerous phone calls during the next few days to experts in wooden boats. Although the general nature of their messages was positive “she is still afloat, can’t be too bad”, he was not convinced, especially because the stern would give way by about 50 mm if he stood on it.

“Ultimately we had our boat builder Jochen Landolt, the owner of Michelsen Wharf, who cares for Zeeslang, to travel to Austria and inspect the boat. He seemed to feel sorry for Stefanie, and after a good night sleep he agreed to help us. We negotiated a deal, where he would work with his apprentices on Mariquita during idle times of the year to rebuild her during a five year period, and we would pay in a fixed amount per year”.

“Due to certain circumstances (amongst others some cash problems) it took seven years and more than 3 500 hours of work at the yard. Roughly 70 to 80% of the boat is now new”. It took a labour of love to restore her.

On 5 August Mariquita was back on the water, and the following day she competed in her first race – a classic boat event on Lake Attersee.

We are very grateful for all the support we had from our boat builder Jochen, by now a dear friend, Craig Dalgarno, the Swedish National Maritime and Transport Museum, the International 30 Square Association at Lake Constance, Dave Elcock, David Abromowitz, Geoff Meek and many more people who helped us morally through sometimes dark times and with a wealth of information. 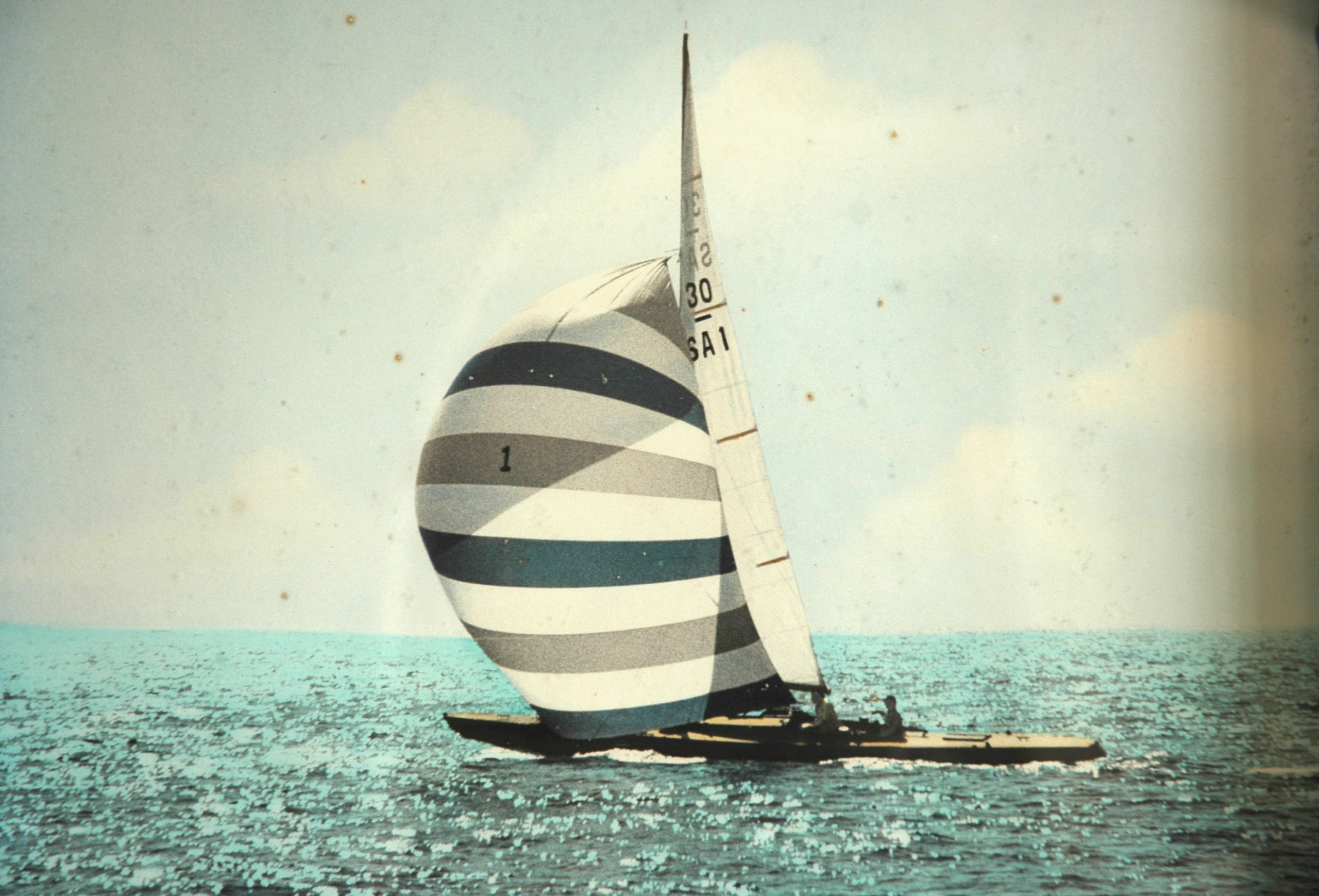 Mariquita – a hand-coloured pic of this famous yacht.
from the archives of Richard Crockett & Sailing Publications