Mariette of 1915 and Naema Are Schooner Winners in Capri 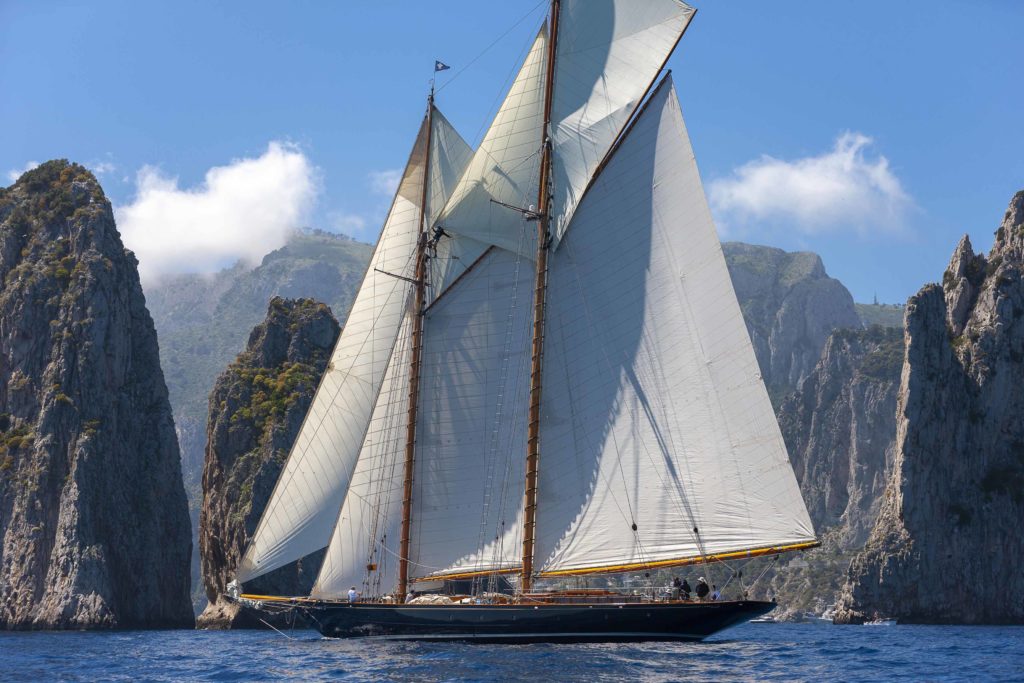 Mariette of 1915 closes on the Faraglioni.
pic by Gianfranco Forza

I am sure that a few followers of my blog thought that the sea air has rusted a few ‘brain parts’ when I first published info on this event last week!

But no, it was simply due to the fact that here in isolated South Africa we simply don’t get to see magnificent schooners such as the four competing in this event, so it was about the boats, the pics and not the racing which was keenly contested too.

For their final day of racing, the four schooners, ranging in size from 85′ ‘Orianda’ to 138′ ‘Mariette of 1915′, once again started in the Gulf of Naples bound for a turning mark off Punta Campanella, at the tip of the Sorrento Peninsula. They then headed on to a finish line off the Faraglioni, the famous rocks off Capri’s southeast shore. The significant different was the pursuit race format, with staggered starts: ‘Orianda’ leaving at 12h10, followed ten minutes later by ‘Puritan’, ‘Mariette of 1915′ at 12h47 and finally ‘Naema’ at 12h50. 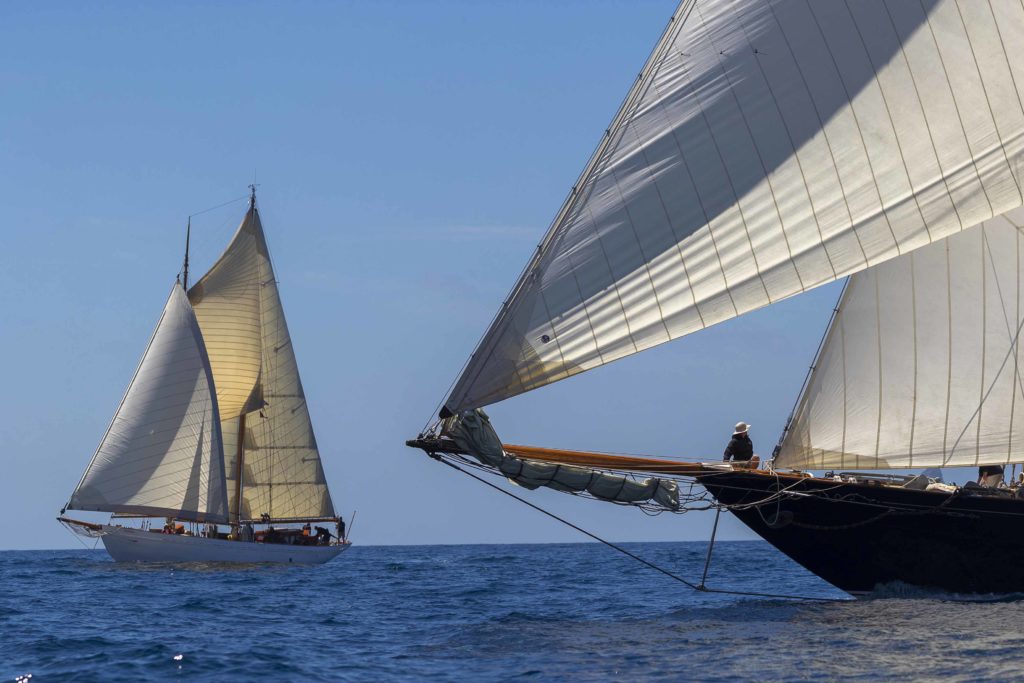 The International Schooner Association is developing polars for the schooners to improve the accuracy of their pursuit races.
pic by Gianfranco Forza

‘Mariette of 1915′ first dug into the Sorrento Peninsula and, having learned her lesson from Friday, chose a generous layline into the Punta Campanella turning mark. Seeming to find her own personal breeze enabled her to overtake all three of her rivals and lead around the turning mark, just ahead of ‘Orianda’, with ‘Puritan’ and ‘Naema’ still some way astern.

Sadly the wind died on the approach to the finish, leaving crews time to contemplate the towering Faraglioni stacks, hewn over millennia by wind and waves. Eventually ‘Mariette of 1915′ ghosted over the line followed by ‘Naema’,’Orianda’ and ‘Puritan’. 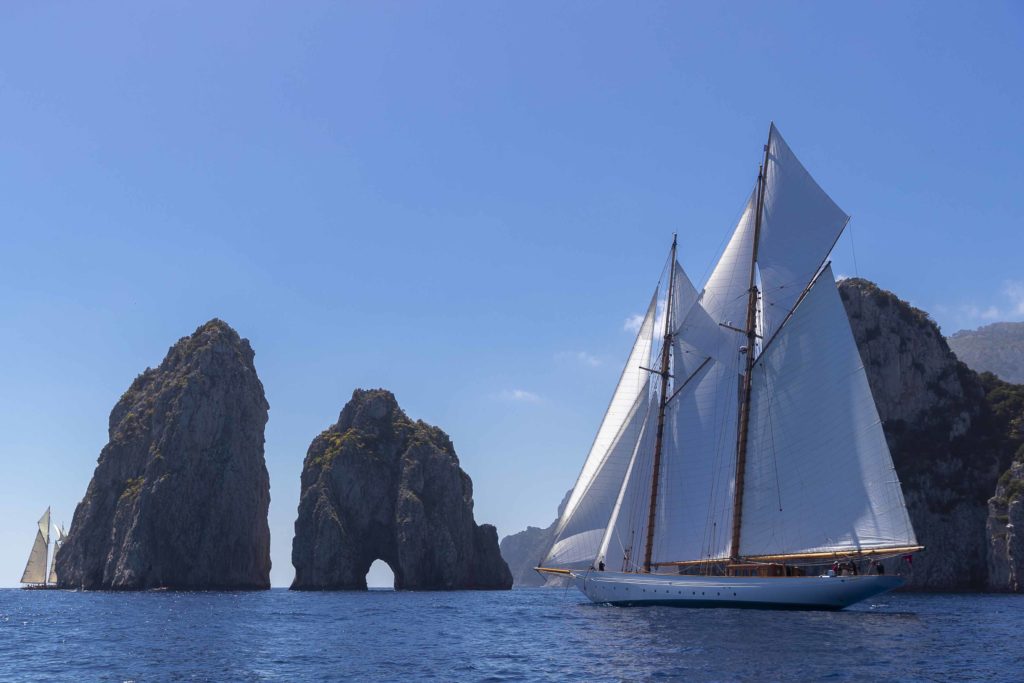 Naema ghosts towards the Faraglioni to take second in the opening round of the Schooner Cup Series.
pic by Gianfranco Forza

While ‘Mariette of 1915′ claimed first honours in the Schooner Cup Series, winner of Capri Classica after three days of racing over Wednesday to Friday was ‘Naema’, with whom she had spent the entire event match racing. The outcome of this competition was decided in Friday’s race when ‘Naema’ planted a penalty on her rival in a port-starboard incident at the top mark.

“It is the first time ‘Naema’ has won a regatta,” said a jubilant Florian Franke, Captain of Naema. We have had several day wins but never won a regatta before. It is especially great because we beat ‘Mariette’, which has been our goal since 2016.”

As to why success has come now, Franke explained: “The key thing is training, continuity and management. You make big improvements during the first 80% which is where we still are. The most difficult part will be to get the last 20%. We have a permanent crew of 7-8 and a race crew of 26 and more than half have been with us since the beginning. It’s a great family of people who really understand schooners.” 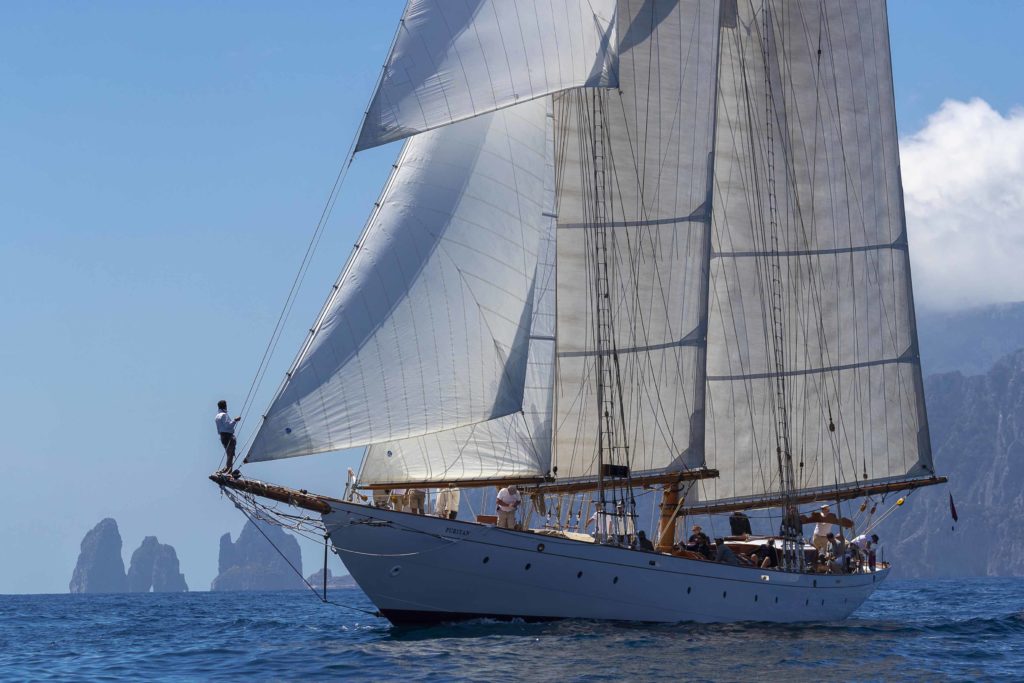 Puritan makes the best of the light conditions.
pic by Gianfranco Forza

‘Naema’s’ competition with ‘Mariette of 1915′ was especially good since it was a straight match race coming down, as always, to starting well, going the right way around the course as well as schooner-specific things like choosing the right sails at the right times and manoeuvring – especially labour-intensive when you can fly eight sails simultaneously – in the most efficient manner.

At the prizegiving at Torre Saracena, at Marina Piccola on Capri’s south coast, Florian Franke, accepted the trophy on behalf of ‘Naema’ for winning Capri Classica, while his crew were presented with Extrema Ratio knives for winning the traditional schooner crafts and skills competition between the four boats. ‘Mariette of 1915’s’ Charlie Wroe picked up the first Schooner Cup Series trophy, to applause followed by the singing of a traditional sea shanty. 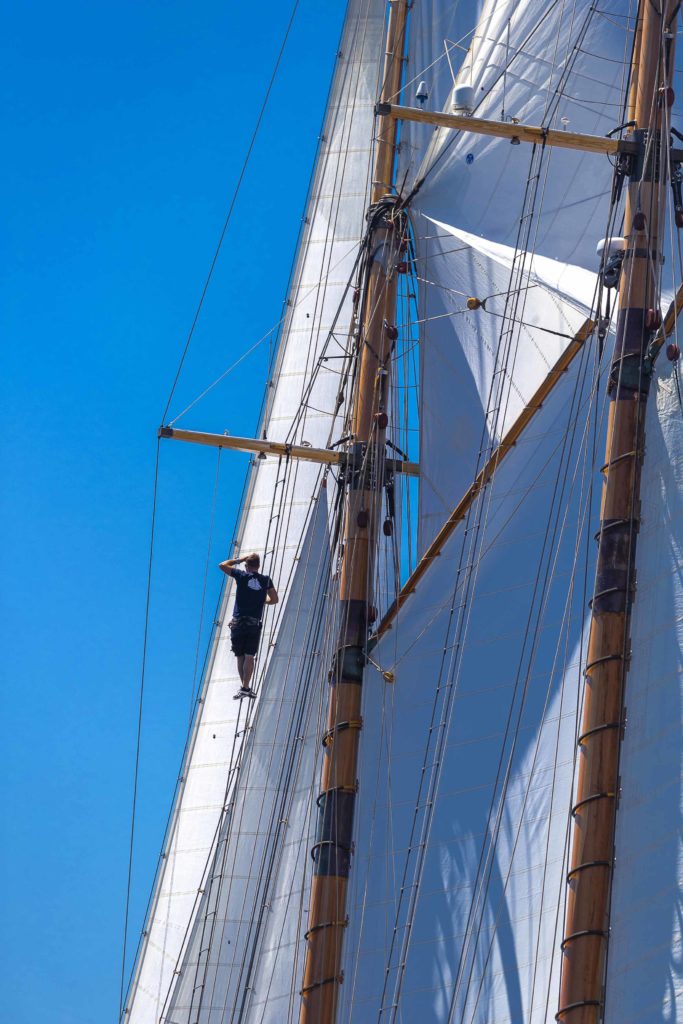 Looking for breeze from aloft.
pic by Gianfranco Forza

In the meantime, enjoy these graceful pics of these magnificent beasts.