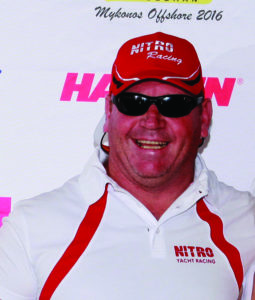 Mike Hayton is no stranger to the competitive racing scene, and a man who likes to surround himself with a dedicated crew who like to sail and play hard. Plus, with two top keelboats in his stable he is able to give both women and men the opportunity to sail on top boats.

The annual Mykonos Race is always a favourite on his calendar and he works his crew hard on the passage to Mykonos, and then even harder during the bay pursuit race. This year, like many previous, dawned with no strong SE to get the boats there. Instead, an incredibly taxing and difficult day met the fleet. Through sheer perseverance and skill, Hayton and his team managed to take line honours after over 12 hours at sea to complete the 60 mile course. All but a handful of competitors retired, unwilling to tough it out, and choosing the iron topsail instead.

‘Nitro’ then dominated the Saturday pursuit race, after starting near the back, they marched through the fleet to comfortably win the pursuit race, and with it, the overall honours, with a score line of 1,4,1,1.

The Nitro team has been in existence for the last 5 years, and it’s through Hayton’s leadership that it continues to go from strength to strength, remaining competitive on the ORC circuit, as well as in the new Cape 31 fleet, where he recently launched his new boat.