Man Crosses Atlantic in A Barrel 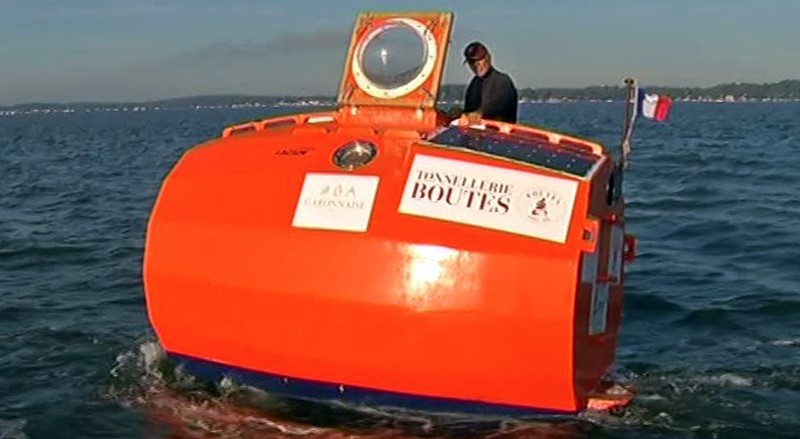 Some stories that you see floating by on your Facebook feed seem too ridiculous to be true and in many cases they are. But not this one. This one I first learned about last December when a Frenchman announced that he was leaving to float across the Atlantic Ocean in a barrel. No sail, no motor, nothing. He was planning (and hoping) that the prevailing wind, currents and waves would propel him all the way across the ocean to the Caribbean Sea.

His name is Jean-Jacques Savin and he is 72 years old. He had already sailed across the Atlantic Ocean four times and felt that his fifth crossing should be a little different so he set out to build a barrel-like capsule in which he could live while being blown and sucked across the pond.

The barrel weighs 990 pounds and has approximately 65-square feet of living space. It is equipped with a bunk, galley, storage space and portholes so that he could take in the view while he drifted along. He made sure to pack a block of foie gras and a bottle of Sauternes white wine for New Year’s Eve as well as a bottle of red Saint-Emilion for his 72nd birthday which was in January.

Savin set out from El Hierro in Canary Islands and was headed for the Caribbean, anywhere in the Caribbean because his exact arrival spot could not be predicted. “I will probably land in Barbados,” he said. “Although I’d really like it to be a French island like Martinique or Guadeloupe. That would be easier for the paperwork and for getting the barrel back to France.”

Now it’s easy to make fun of a stunt like this, but I decided to check in with his progress every so often and was very surprised by the zen-like reports that he sent on a daily basis.

In one report he wrote “the sunset was quite discreet behind a large layer of clouds, but ten minutes later there were pink reflections painting the sky.” In another he wrote, “in the evening after some storms had passed we splashed around like a car that splashes in a puddle. Yesterday evening the sun set behind a bank of Nimbostratus with the crescent moon following it, and this morning it rose from behind some cumulonimbus to mark the start of a very calm day.”

It was clear from all his reports that he was having the time of his life and enjoying the solitude and his time communing with nature. In this fast paced world we live in it’s refreshing to know that not all of us are hell bent on working ourselves to death. Mr Savin should be an inspiration to us all.

This morning as I was again flipping mindlessly through my Facebook feed I saw this report from Mr Savin. “After 122 days and nine hours, the meridian positions me in the Caribbean Sea. The crossing is over. Thank you all.”

For those skeptics, myself among them, he proved us wrong and he also proved that the currents and trade winds that have blown in the same direction since the beginning of time continue to do so. Bien joué Monsieur Savin, well done.