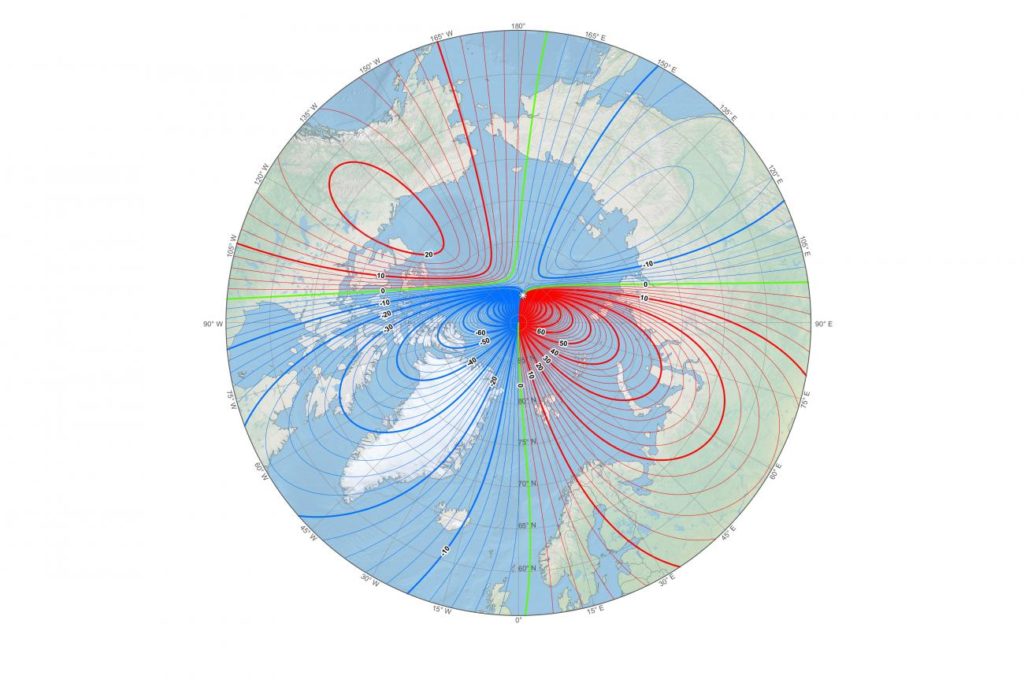 This map shows the location of the north magnetic pole (white star) and the magnetic declination (contour interval 2 degrees) at the beginning of 2019.
Pic Courtesy of NOAA NCEI/CIRES

The magnetic pole is moving faster than at any time in human history, causing major problems for navigation and migratory wildlife writes BRYAN NELSON.

Magnetic north in the Arctic Circle is shifting so quickly now that it’s affecting navigation.

Whenever you hold a compass, the needle points to magnetic north near the North Pole. For centuries, magnetic north has led navigators and explorers around the world.

But the magnetic north pole is currently shifting at a faster rate than at any time in human history.

“It’s moving at about 50 km (30 miles) a year. It didn’t move much between 1900 and 1980 but it’s really accelerated in the past 40 years,” Ciaran Beggan, of the British Geological Survey in Edinburgh, told Reuters.

A five-year update of the World Magnetic Model was due in 2020, but the U.S. military requested an early review, according to Beggan. The latest update was released on 4 February 2019 and shows the magnetic field shifting further west.

The changes are causing major problems for aviation, navigation and migratory animals that use the Earth’s magnetic field to orient themselves. Some airports have had to change the names of their runways to better correspond to their current direction relative to magnetic north.

Ever since the magnetic north pole was first discovered in 1831, geologists have been tracking its progress. Unlike true north (which is marked by the Earth’s axis), magnetic north is constantly on the move due to changes in the planet’s molten core, which contains iron. Throughout most of recorded history, the pole has been positioned at or around Canada’s icy Ellesmere Island, but if it keeps moving at its current rate, it won’t be long before it sits above Russia instead.

The thing that really makes the pole’s current movement so unusual, however, the speed at which it’s shifting. In the last decade alone, movement has increased by a third, throwing off compasses by roughly 1 degree every five years.

Changes that fast have already caused major headaches for the U.S. Federal Aviation Administration. In 2011, Tampa International Airport in Florida renamed all of its runways, which are named after the degree at which they point on a compass. Similar changes were made to runways at Fort Lauderdale and Palm Beach.

The shifting pole may also become a grave concern for migratory wildlife, such as birds, turtles and other sea creatures that use Earth’s magnetic field to navigate over great distances. It’s unclear if these animals are capable of recalibrating their navigational instincts to compensate for the changes.

Will the north pole eventually flip?
But some experts believe that it may be the beginning of a complete pole reversal, according to the Independent.

The rapid shifting of the pole’s position has prompted some experts to speculate that the Earth’s entire magnetic field may be preparing to “flip,” whereby all compasses invert and point south instead of north. It may sound radical, but in geological time, pole reversals are relatively common. Though they typically occur once every 400,000 years or so, it’s been 780,000 years since the last flip.

Scientists disagree on how a pole reversal would effect ecosystems around the world, but some alarmists warn of a planet-altering catastrophe, whereby earthquakes and monumental tsunamis threaten the Earth for decades. Though such radical doomsday prophecies cannot be completely ruled out, the vast majority of scientists offer more tempered predictions, says NASA.

“Reversals typically take about 10,000 years to happen,” said Jeffrey Love of the U.S. Geological Survey. “And 10,000 years ago civilisation did not exist. These processes are slow, and therefore we don’t have anything to worry about.”