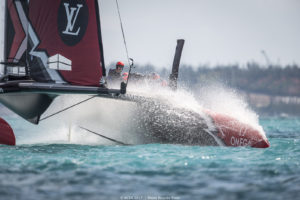 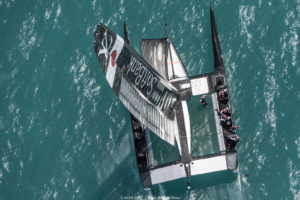 With the wind not playing ball yesterday, the daily dose of foiling was something missed by many. So let’s hope that the wind arrives on cue this afternoon in Bermuda, and that we can get back to watching the speedsters in action.

There are some fascinating match ups today, with a few teams needing to put in some really good performances – or face going home.

First up is Japan vs France. Both are in dire need of points, so this could be a tight one.

Then comes the Brits against New Zealand. Ben Ainslie and his crew are very short of points and will want, more than anything to prove that they are real challengers and can beat the Kiwis. However at the moment the Kiwis are a race up against them.

USA vs Japan is in all likelihood going to be a whitewash as the OTUSA is very quick, having lost just one race so far in the series. They appear to be very quick in the light conditions, but don’t write the Japanese off. Look what happened to South Africa in the last Rugby World cup when they underestimated them – South Africa were beaten. The Japanese have shown some signs of speed, and cannot be written off simply due to the experience of Dean Barker.

The final showdown tonight is between France and the Brits. The French have already taken a race off the Brits, so Ainslie will at least want to level the score – and has to, to stay in contention.

Watch it live toning from a few minutes after 19h00 (SAST).