Lipton Cup. What a Corker! 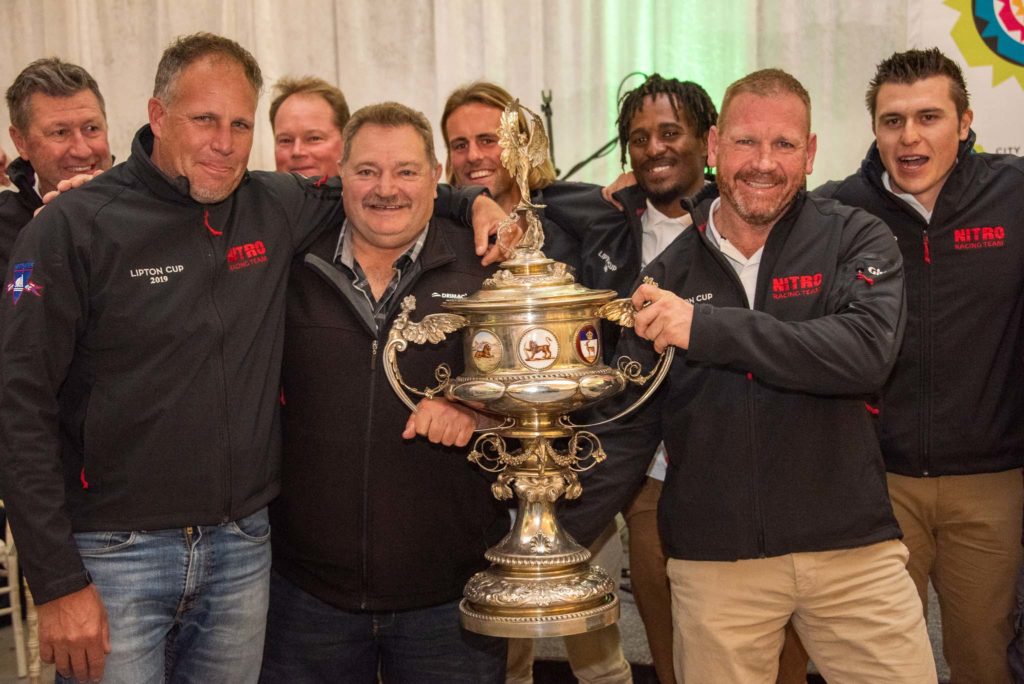 The best way to write about the 2019 event is to start at the prize giving! It had been said countless times in the build-up to the regatta, and while racing was taking place, that this was simply the most competitive fleet for many years with the cream of our best sailors competing.

To kick off his victory speech, David Rae requested that all Lipton Cup winners stand, then World Champions, National Champions and Olympians too. There were more standing than sitting! Proof enough that the cream of the crop was there.

This was an incredible regatta in every single way possible. Here’s why. 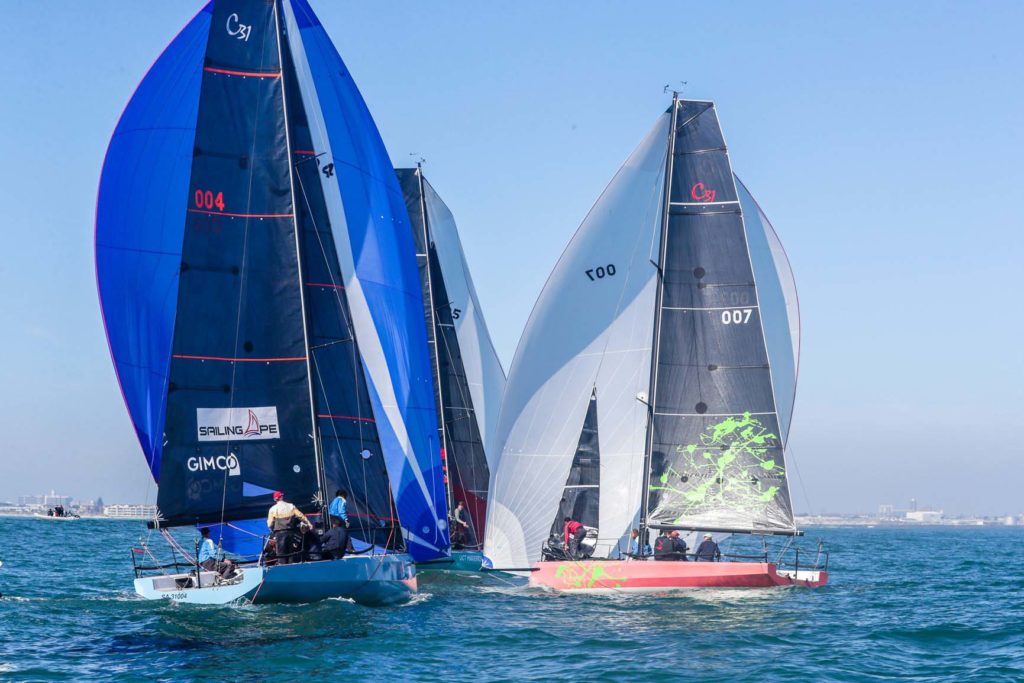 Close racing with plenty of position changes were a positive feature of the Lipton Cup 2019.
pic by Liesl King

The Cape 31 proved to be a good choice although crew needed time in the boat to understand its nuances and race it competitively. Most teams put in tons of time on the water in preparation. More importantly, despite some quite big gaps between boats at times, the fleet was able to come together quickly, mix it up and change the standings on almost every single leg. There was hardly any hint of simply follow-my-leader and hope for the best. A lead was never secure until the finish line had been crossed.

Tactically the courses were pretty true in every race with the fleet splitting to either side, and then coming back together to combat at close quarters for the mark roundings. 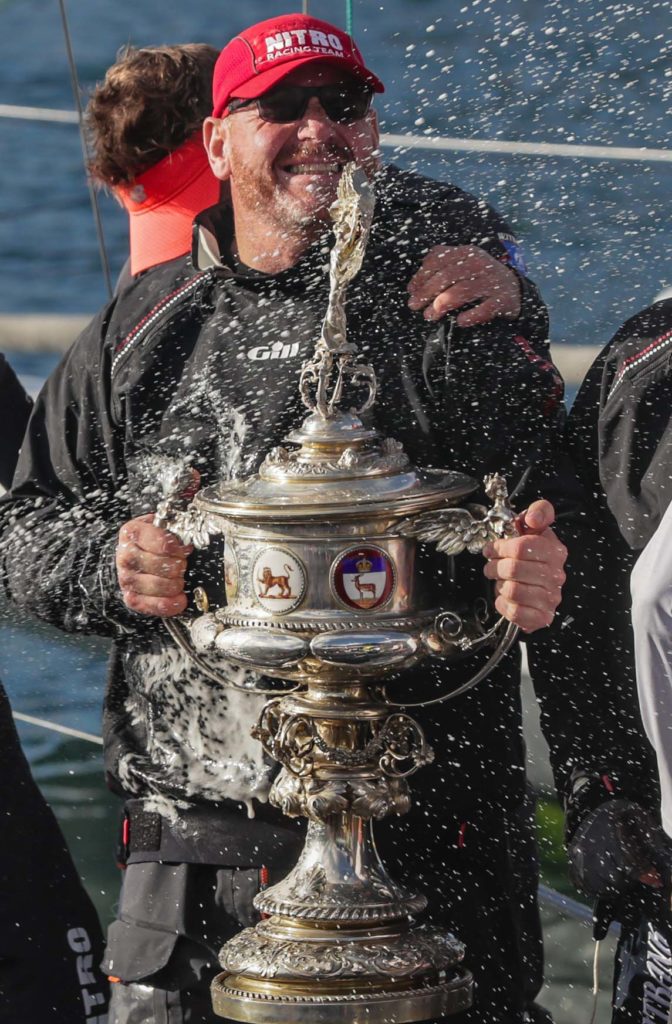 The smile of a winner – Mike Hayton lifting the Lipton Cup for the first time.
pic by Liesl King

It was spectacular to watch as one was always on the edge of the seat, and crew work was slick, very slick, and very professional which is a testament to the crew who had spent many long hours in training.

The final race which was won by Aeolians saw them go right from the very start, with the bulk of the fleet going left. David Hudson, the oldest crew in the fleet, had seen some cloud on the mountain with five minutes to go, and called that move then. They had what looked like an unassailable lead at the end of the first beat, but this was slowly whittled down throughout the race by Hermanus Yacht Club who ultimately had to settle for second – a fine result for both teams after a tough regatta. 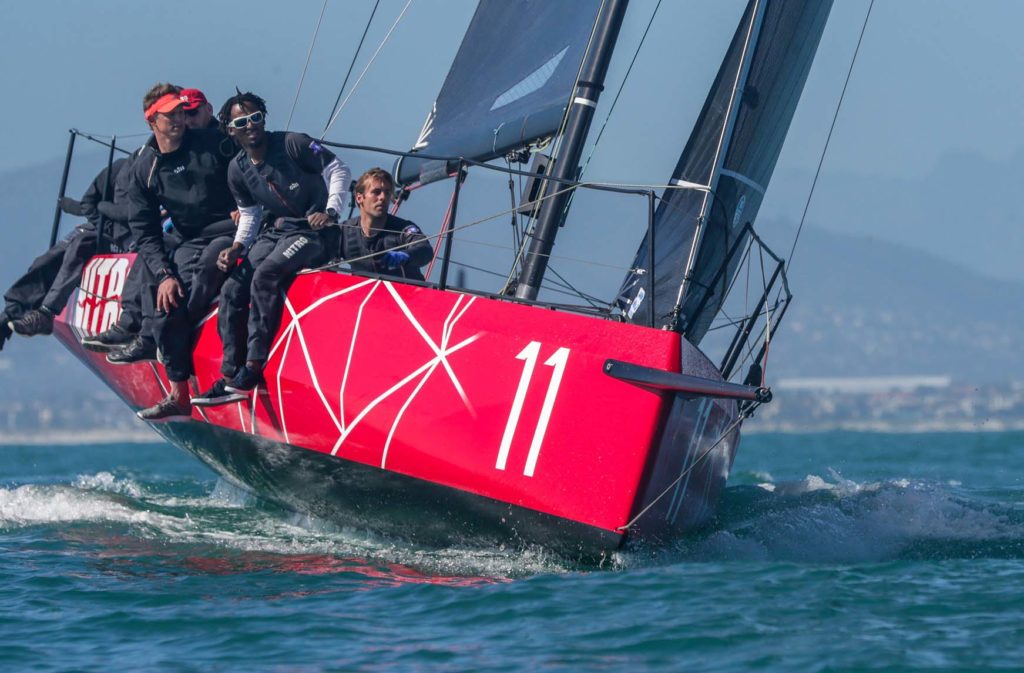 There were just two standout boats in this fleet, with WYAC and RCYC slugging it out for supremacy. As has always been said in the Lipton Cup – it’s consistency that counts and wins the cup, and no-one sailed more consistently than Mike Hayton and David Rae on ‘Nitro’, representing Witbank Yacht & Aquatic Club. They won the opening race and then scored two more firsts and two seconds in the first five races to have a commanding lead.

As one knows, the Lipton jitters can, and do, on occasions set in, and their final three races were not really their finest – although not due to poor sailing. In those races they scored 5; 2 & 7 – with kelp and plastic bags bugging them. These obstructions forced them, and other boats too during every race, to back-down to clear the kelp – all the while losing places. 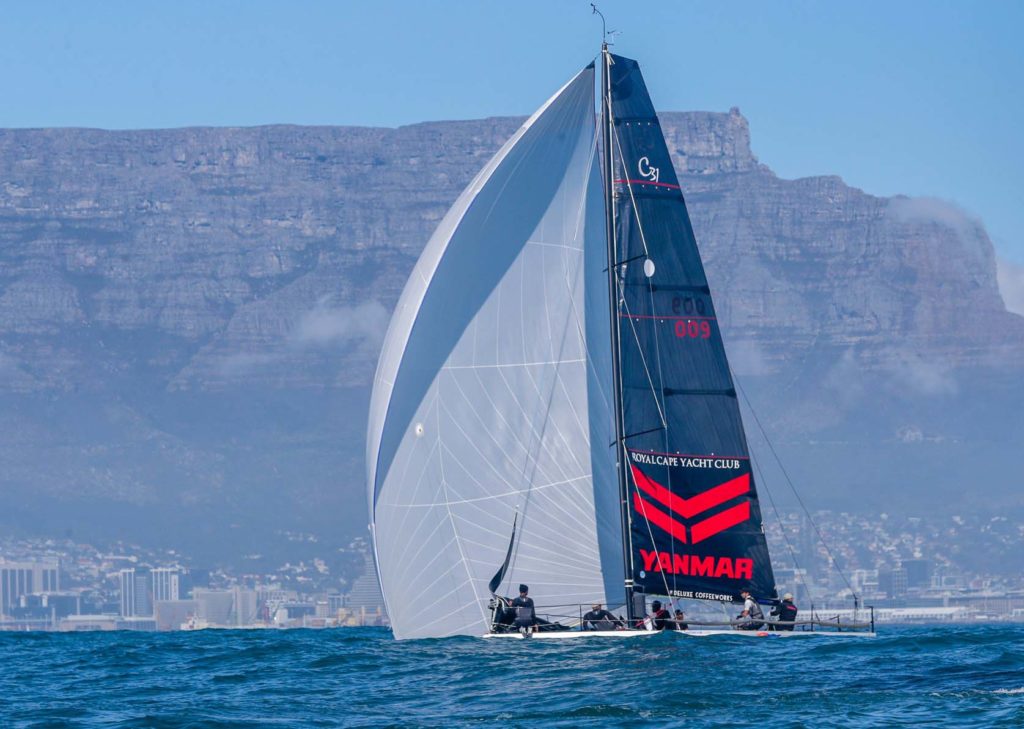 The final race was heart-in-the mouth stuff for WYAC as with their five point buffer one would have expected them to hang in, keep out of trouble, and sail conservatively. These tactics they were forced to abandon as on starting they snared kelp and backed-down, effectively starting last. They were obstructed on 3 different occasions up the first beat with plastic, so instead of defending the lead, they were having to challenge for it – every single inch of the way to the finish line.

It was dramatic stuff as at one point they had relinquished the Cup to RCYC, yet had the ability to fight back and win overall. They were thoroughly deserving overall winners. 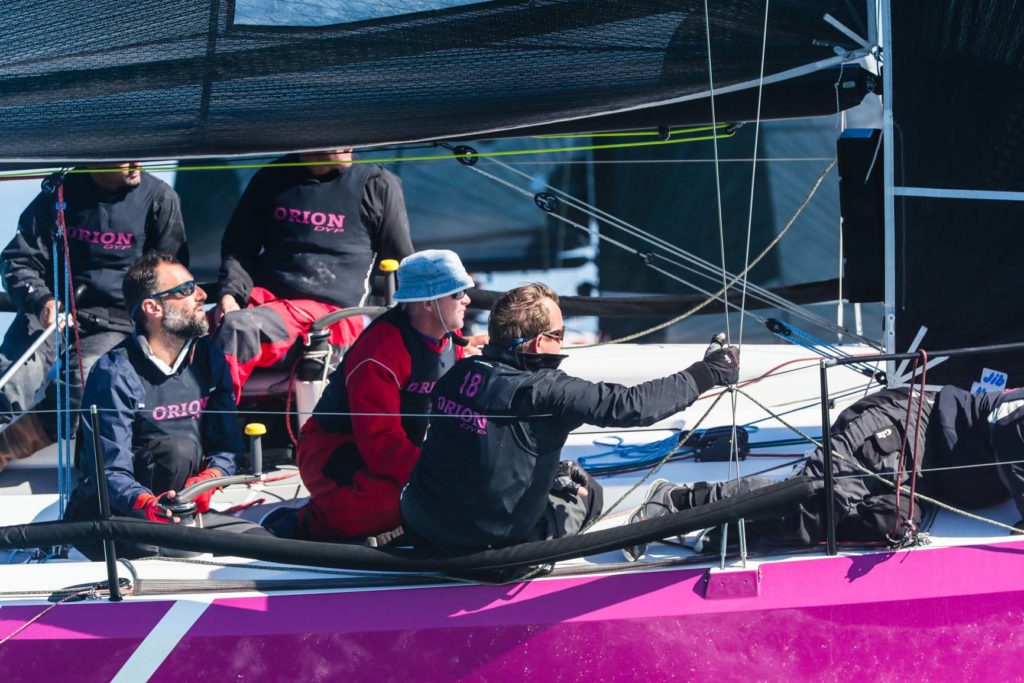 No report would be complete without mention of the RCYC team which was co-skippered by Gerry Hegie and Asenathi Jim. They had big pressure on their shoulders as the RCYC was the defending Club. Hegie helmed ‘Yanmar’, their trusty steed, like a man possessed and won three races of the 8 race contest. He was fast, very fast on the water, and would often come back from impossible positions by the end of the race. But, he was not consistent, and in an early race conceded a substantial lead due to a wind shift, and also took a scoring penalty after an altercation with another boat. It was these lapses that effectively put him out of the running despite appearing to be fastest on the water.

Mark Sadler, sailing for RNYC on ‘Orion DYP’, was always tipped to be a threat, and after his win in race 3 looked to be set to make a challenge, but he just never really got it going from there. He’s a very fine sailor as we all know, but having flown in the night before the first race, he simply did not have enough time with his crew to hone the edge he needed. Yet his third overall was just reward for a hard weeks sailing. 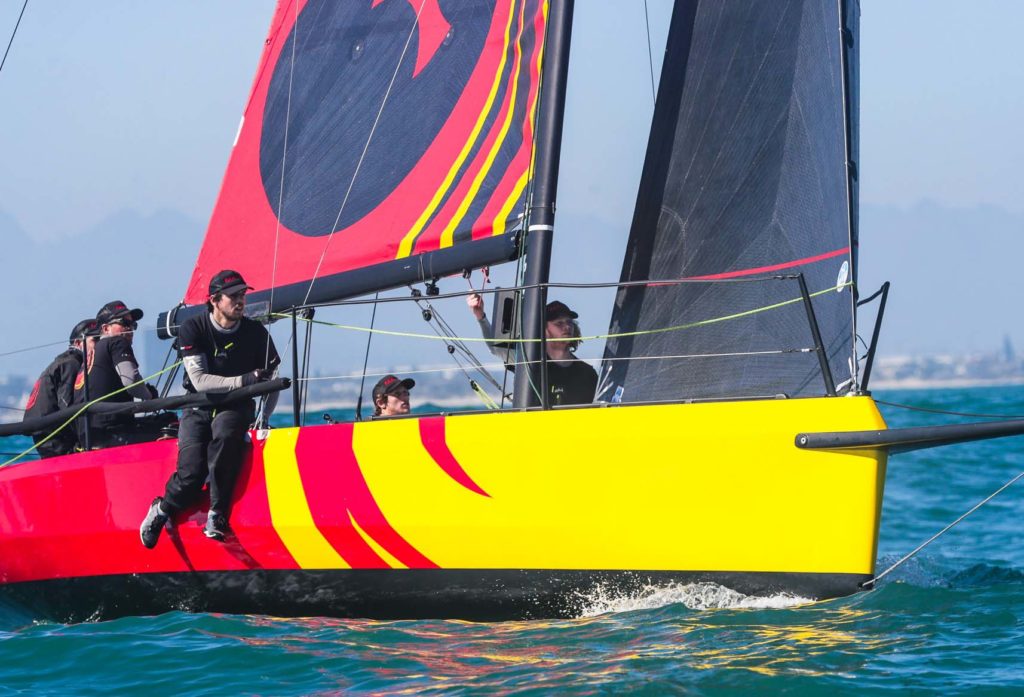 The Walvis Bay Yacht Club team, skippered by Bjorn Geiger, had a really good regatta, threatening the top runners in almost every race, but sailed themselves out of any podium place on the final day in the lighter conditions which they battled in.

The issue of kelp and plastic in the sea is cause for concern. Kelp is something one simply cannot control, but plastic is controllable. Big storms in the days building up to Lipton resulted in rubbish being washed into the sea from the City via their storm water drainage system. The same happens in Durban, and undoubtedly other cities around the world. No excuse – and something the City of Cape Town should be ashamed of and investigate methods of curtailing. We need clean seas – full stop! 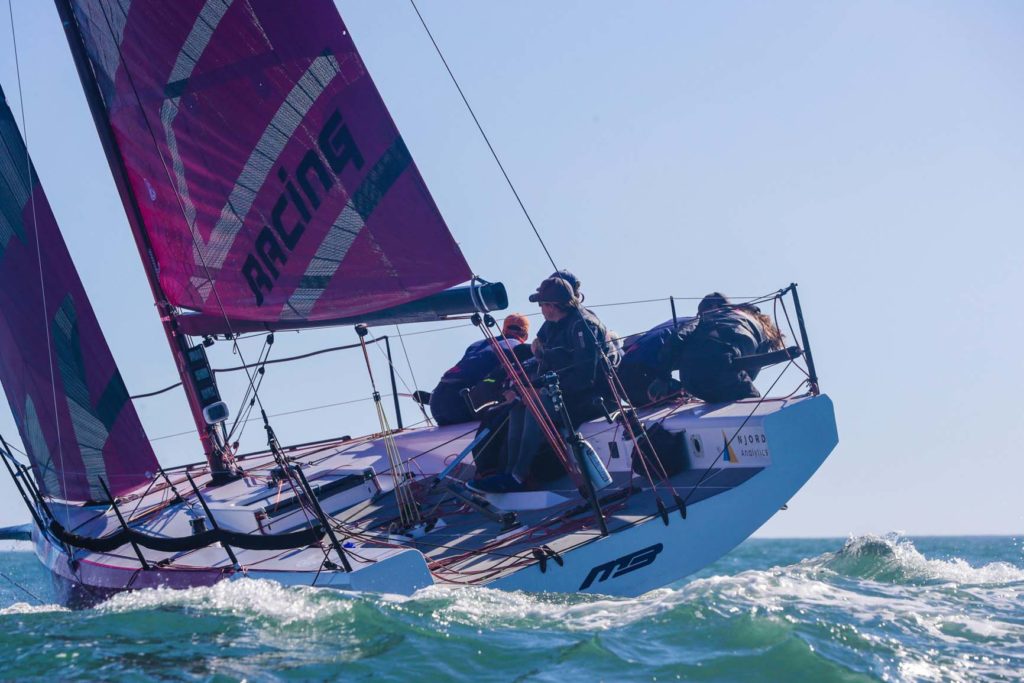 Much has been said and commented on in the various social media platforms about the choice of the C31 for Lipton. Because the boat is so fast two races a day are possible – even on the 12 nautical mile compulsory courses. Plus the Race Officer did not have to wait more than a few minutes before finishing first and last – so the second race of the day could be stated 20 minutes after the last boat. That’s a very quick and time-efficient turnaround time.

Having been a vocal supporter of the L26 with the proviso that the support was until something better came along, I am now convinced that the C31 was a great choice for Lipton, as was the L26 in its heyday. The Lipton Trustees initially stated the C31 was for a two year trail period. I don’t believe that trial needs to be any longer and would encourage them to entrench it for the foreseeable future until it too has served its purpose like the 5 designated Lipton Cup classes prior to the C31. 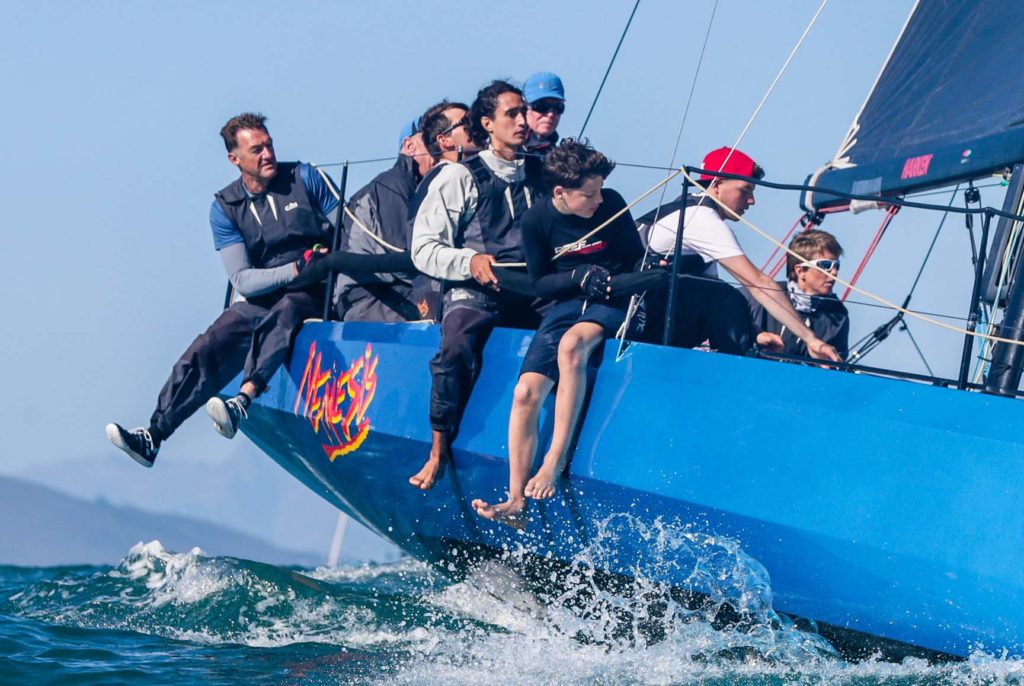 2020 will see the event in Langebaan, and by then the local fleet should have swelled to 15-plus boats. The competition is getting tougher – and the winner is undoubtedly the Lipton Challenge Cup – and sailing as a sport in South Africa. 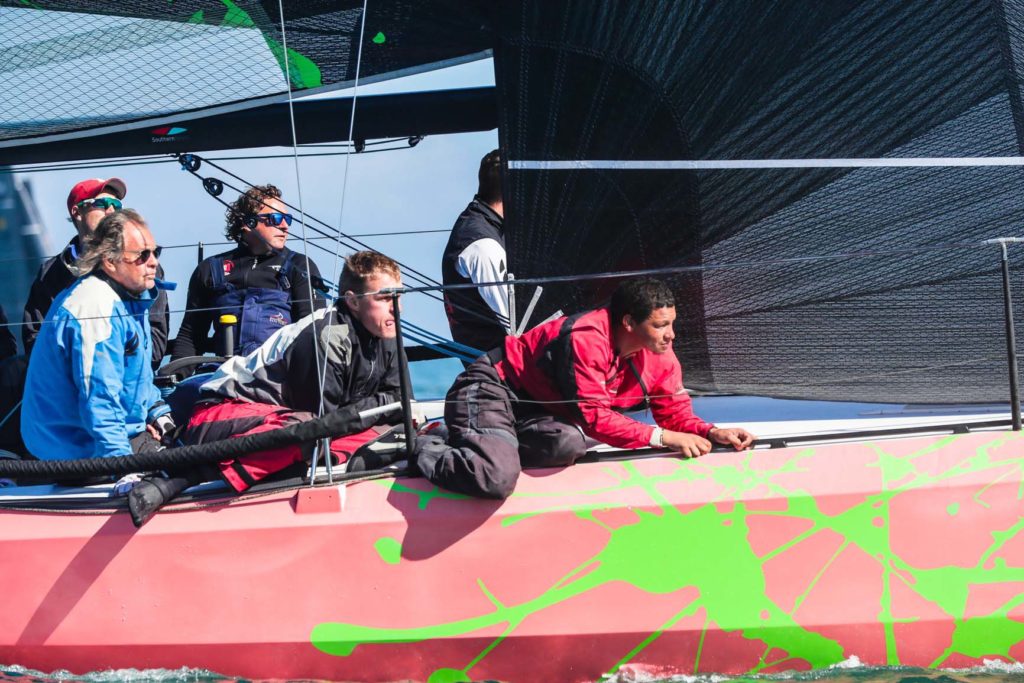 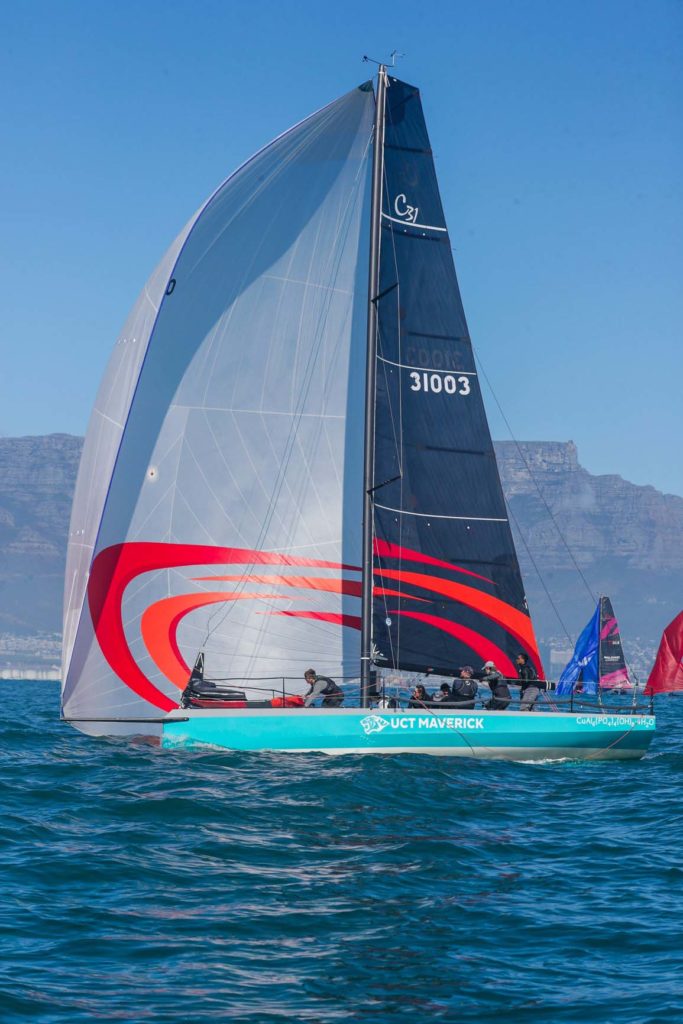 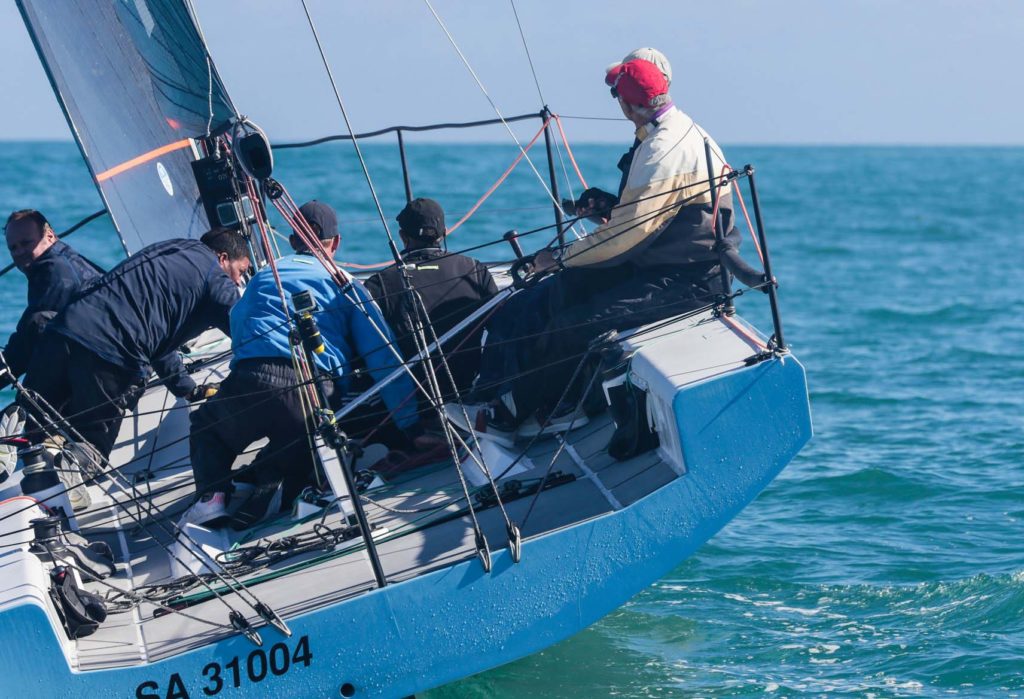 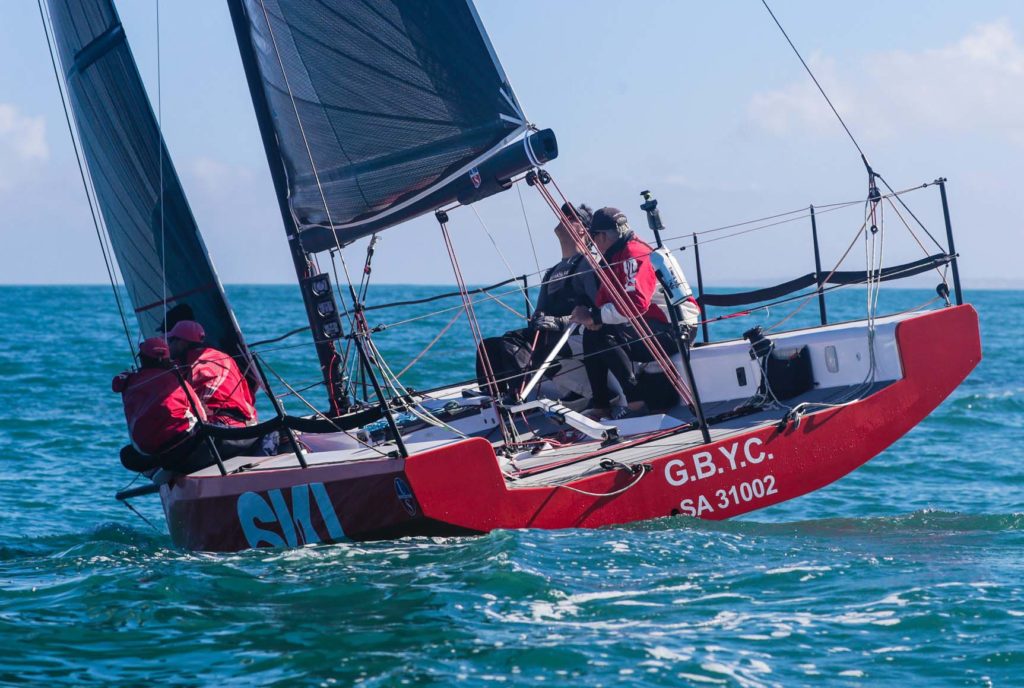