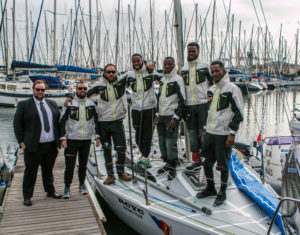 DATES: The Lipton Cup Deed of Gift requires that “The Club winning the Cup in each year shall within two months thereafter notify the dates on which the next Cup races shall be sailed….”

In compliance with this requirement Royal Cape Yacht Club yesterday informed the Lipton Trustees that the dates for the next Contest will be 6th to 13th July 2018.

VENUE: It is well known that the Lipton Cup Deed of Gift stipulates that each year the “races for the Cup…. shall be held at the Port being the headquarters of the Club by which the Cup was last won.”

However, the 2017 winners RCYC have offered to forgo their right to defend the Cup in Table Bay next year in order to afford Point Yacht Club an opportunity to host the Contest in Durban – an opportunity unfairly denied them in 2014. The letter attached below from RCYC Commodore Vitor Medina to PYC Commodore Greg de Beyer explains the background to this offer.**

PYC have enthusiastically accepted RCYC’s proposal and will host the 2018 Lipton Challenge in Durban directly after MSC Week next year.

Although the change of venue for next year’s contest is in breach of the above provision of the Deed of Gift, the Lipton Trustees are confident that, in the light of the exceptional circumstances that pertained in the 2013 Challenge as explained in the letter below, this arrangement satisfies the spirit of the Deed.

CLASS OF BOAT: In line with the wishes of the majority of the 20 clubs that responded to the Lipton Trustees’ recent request for comment on a possible change of boat for future Lipton Challenges, the boat for the 2018 Contest will be the L26.

NOTICE OF RACE and Sailing Instructions will be posted on the Lipton Challenge website and distributed to Clubs no later than November 15th.

** The letter referred to above can be viewed here:  Point Yacht Club Lipton Cup Letter