Lipton Cup. The Final Say – With Response to Questions 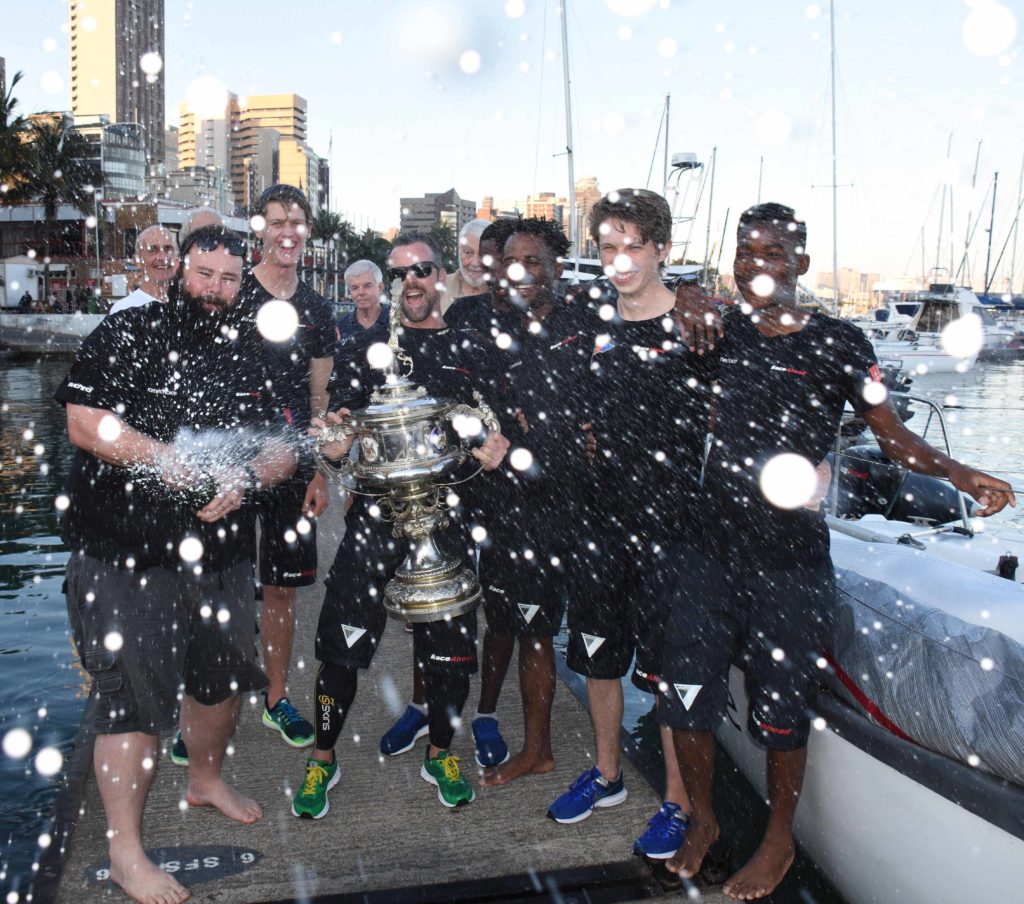 The winning Royal Cape Yacht Club team who won 4 of 5 races in the Lipton Cup which finished off Durban today. Here they celebrate with the Lipton Cup as they stepped ashore from the final race.
pic by Richard Crockett/SAILING Mag Blog

It’s always good to see that Lipton appears to be important to a lot of people. The objective of this piece is to respond to some of the points raised in the Facebook comments, both for my original article and for the letter from the Trustees re the future of Lipton:

2. Comment: Let’s introduce some other (cheaper) class – either smaller or from 2nd hand boats overseas.
a. Response: That has been tried:
i. 2 pre-owned Melges 24s imported about 10 years ago – there were never any others.
ii. My personal experience is attempting to establish the Rebel dinghy in South Africa. We did not get beyond 18 boats, even with a     massive amount of effort. By contrast, some of us brought in Lasers a few months ago and it was relatively easy to get pre-orders for a   container of 7.
iii. The summary is that anyone actually attempting to introduce a new class will, most likely, find that the cost in time, energy and     direct expenses will make a C31 look very cheap, whatever the price.
iv. Obviously, I could be wrong and there is nothing to stop a group of individuals getting together and attempting to establish a new   class / importing boats from overseas. When they get to critical mass (i.e. around 10+ boats), I’d imagine that there will be interest   from others.

3. Comment: Maybe it’s time to scrap Lipton.
a. Response: To have a Lipton Cup regatta, you only need a defender and a challenger. That needs to be re-emphasised: you do not need a large fleet. Lipton Cup is not about “quantity” and it is absolutely okay if the fleet is very small, even if it just a match race.
b. It’s obvious that there’s more than enough interest to ensure that having a regatta should not be a problem.
i. Proposing that we scrap Lipton simply because we’ve come to the end of an era (in this case, of good competition in the L26) is rather defeatist… Change is inevitable and, in this case, shouldn’t be too hard to manage.
ii. Moreover, suspending the Cup for even 1 year can’t happen, not even by RCYC (who own the Cup) or the Lipton Trustees (who are responsible for ensuring the Deed of Gift is honoured). Even if only 1 club challenges the       holders of the Cup, the Deed of Gift requires that the event goes ahead.

5. Comment: Cape 31s are only sailed in Cape Town at the moment.
a. Response: The builder is producing one boat per month – that means that another 12 could be launched before August next year.
i. There’s nothing to stop sailors from other centres placing orders.
ii. It should also be noted that the C31 is the only small keelboat being produced in South Africa at the moment.  In case you’re asking, the other keelboats are Class 40s (Cape Racing Yachts) and Southern Wind Shipyard (82     – 115 footers).
iii. Of course, a South African produced boat also means job creation in a country where the official unemployment rate in Q2 2018 is 27.2%.

The next Lipton class depends on a vote by the General Committees at South Africa clubs. I expect some to opt for the status quo, simply because they might already have access to L26s. However, I hope that the majority consider:
• Whether the status quo is actually taking the sport forward at their own clubs.
• Whether the effort put into their campaigns is a credit to their club and worthy of a regatta with the stature of Lipton Cup.
• What a cool, modern boat sailed by the country’s best sailors could do for Lipton and the sport as a whole.

Hopefully the clubs realise that there is now an opportunity to take the sport forward, and we should take it.