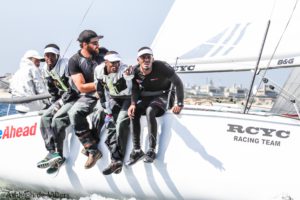 Concentration, focus and determination on the faces of the winning RCYC team on day 1 of the Lipton Cup.
pic by Ashleigh de Villiers 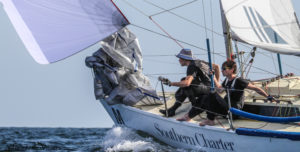 The Lipton Cup Challenge, which got underway today (Sunday) on the rectangular course.

‘Southern Charter UCT’ had a fantastic start and took an early lead. Just before rounding the first mark, however, defending champions ‘Royal Cape Yacht Club’ (co-sponsored by RaceAhead) managed to overtake the UCT youngsters and steadily maintained their first place since. Headed by the “dream team” of Roger Hudson and Asenathi Jim, the RCYC is a strong team and possibly the one to beat this week.

An approaching cold front is sure to add some spice to the on-water action, before the final winner is decided on Friday 25 August.