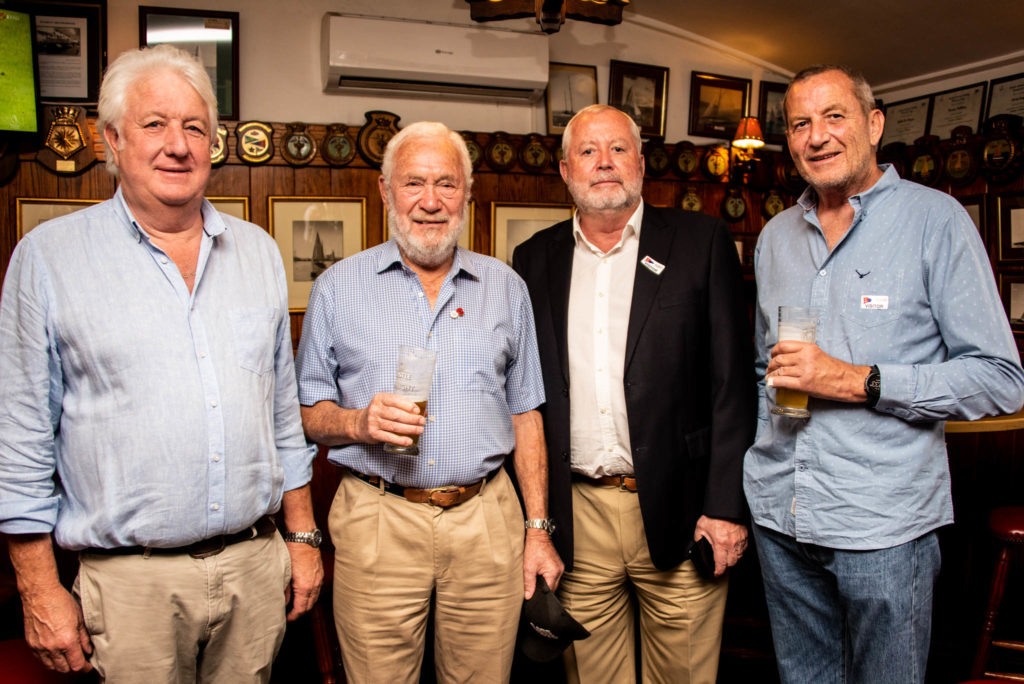 Earlier this week Cape to Rio 2020 Race Officer John Martin caught up with some very old friends who all have one thing in common besides their passion for the sea, and that is the Cape to Rio Race.

He lunched with Sir Robin Knox-Johnston and Hanno and Bernie Teuteberg, reminiscing about the Rio race and the friendships it has forged and which have lasted for decades.

John Martin has been actively involved in the Rio Race over many years, and was Race Chairman in 2009 (to Salvador) and 2011 (to Rio).

During his ocean racing career of some 40 years he skippered famous yachts such as ‘Voortrekker II’ (‘Tuna Marine’) and ‘Allied Bank’ (both 60ft monohulls) achieving notable success in six Transatlantic Races and Two Round the World Single-Handed Races in which he won three legs. He also won a string of awards including the State President’s Sports Award (Gold) twice; Yachtsman of the Year twice and on three occasions was awarded the Gordon Burnwood Trophy for Outstanding Yachting Achievements in South Africa.

Over the course of his illustrious career, John and Sir Robin Knox Johnston became firm friends.

In 1969, Sir Robin became the first person to perform a single-handed non-stop circumnavigation of the globe. Along with Sir Peter Blake, he won the Jules Verne Trophy, for which they were also named the ISAF Yachtsmen of the Year.

Sir Robin, Leslie Williams and their crew aboard ‘Ocean Spirit’, which included Peter Blake, took line honours of the inaugural 1971 Cape Town to Rio Race. In 2007, at the age of 67, he set a record as the oldest yachtsman to complete a solo round the world voyage in the Velux 5 Oceans Race. In 1996, Sir Robin established the first Clipper Round the World Yacht Race and has since worked with the Clipper Ventures company as chairman.

Hanno Teuteberg skippered ‘Broomstick’ (a locally manufactured maxi) in the 1993 race and managed to beat rival ‘Parker Pen’ across the line by just five hours, to take line honours in a time of 15 days, 3 hours and 10 minutes – a new record at that time.

Hanno Teuteberg has not only won the Cape to Rio race, line honours once and twice in the handicap class, but has now also since retired as Deputy Chief of the Navy.

Bernie Teuteberg crewed with Bertie Reed in the 1976 race on ‘Voortrekker’ and he too has now retired from the Navy.

Between these four sailing legends, they have millions of sea miles under their keels, but the enduring friendships that have withstood the test of time and tides, can only serve as an inspiration to the younger generation setting out on their first adventure of a lifetime.