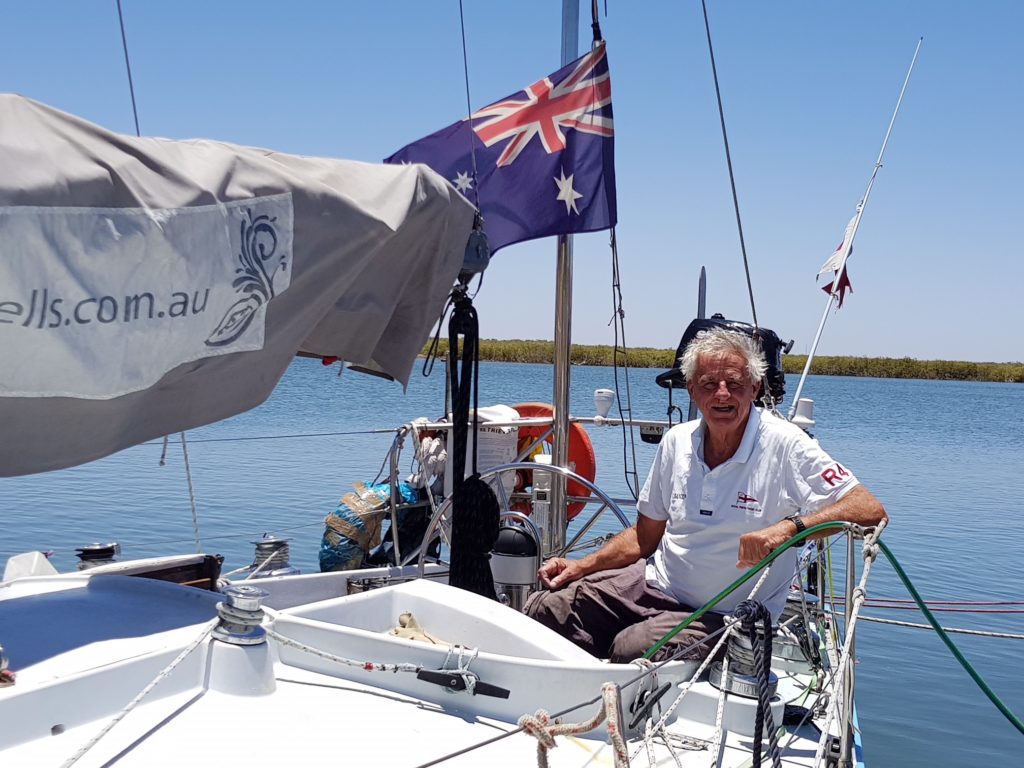 Just before Christmas (2017) Jon Sanders left Rottnest Island on the last leg of his mostly single-handed circumnavigation last week. The passage was approximately 500nm. He arrived in Carnarvon, Western Australia, aboard s/v Perie Banou II, an S&S 39, on Wednesday the 20 December, 14 months after departing Fremantle.

Once again Sanders has accomplished the extraordinary, fuelled by his mantra, “Why be ordinary when I can be original?” The 78-year old, who underwent open heart surgery in 2015, achieved yet another historical milestone in an extraordinary sailing career.

Anyone who has followed his amusing blog will know that Sanders is quite a character. With an exceptional sense of humour, a boyish attitude, and plenty of spirit, Sanders is the embodiment of the cruising ethos. When he realised that a trough would soon develop into a low in his path on what he thought would be his final leg, he thought nothing of taking a detour up the Tamar River in Tasmania. There he immediately befriended Commodore Mitch Ranson, was given the keys to the marina facilities, and roped into giving a talk about his adventures.

Anne Hammick, Commodore of the Ocean Cruising Club(OCC) commented, “Jon epitomizes the spirit of the Ocean Cruising Club, with his low-key approach and his love of being at sea. Things have not always gone smoothly for him, but he never gives up and he never shouts ‘unfair!’ He remains an inspiration to us all, and a role model for the many who aspire to cross an ocean in their own yacht.”

A native of Fremantle and schooled in Perth, Sanders began his sailing career at a young age. He started breaking records and became the darling of the Australian Press when he completed a solo triple non-stop circumnavigation in 1988 aboard s/v Parry Endeavour, a 71,000nm journey that took 658 days to complete. He won the hearts of Australians the world over and Parry Endeavour now takes pride of place next to the 1983 America’s Cup winner Australia II in the Fremantle Maritime Museum.

OCC Regional Rear Commodore for SE Australia, Paul Furniss said, “It is wonderful news that Jon Sanders, an Honorary Member of the Ocean Cruising Club, has arrived safely in Carnarvon aboard Perie Banou II to complete his 10th circumnavigation. It is a momentous sailing achievement. Here in Sydney we were pleased that Jon spent time with us in November and made Port Jackson part of the Australian voyages on his way to Western Australia.”

Sander’s website has the following achievements reported among many more:

No doubt, the list will grow. So, what’s next for Sanders? Stay tuned to his blog to be among the first to know: http://www.jonsanders.com.au/