Is There Life After an Olympic Class is Abandoned? 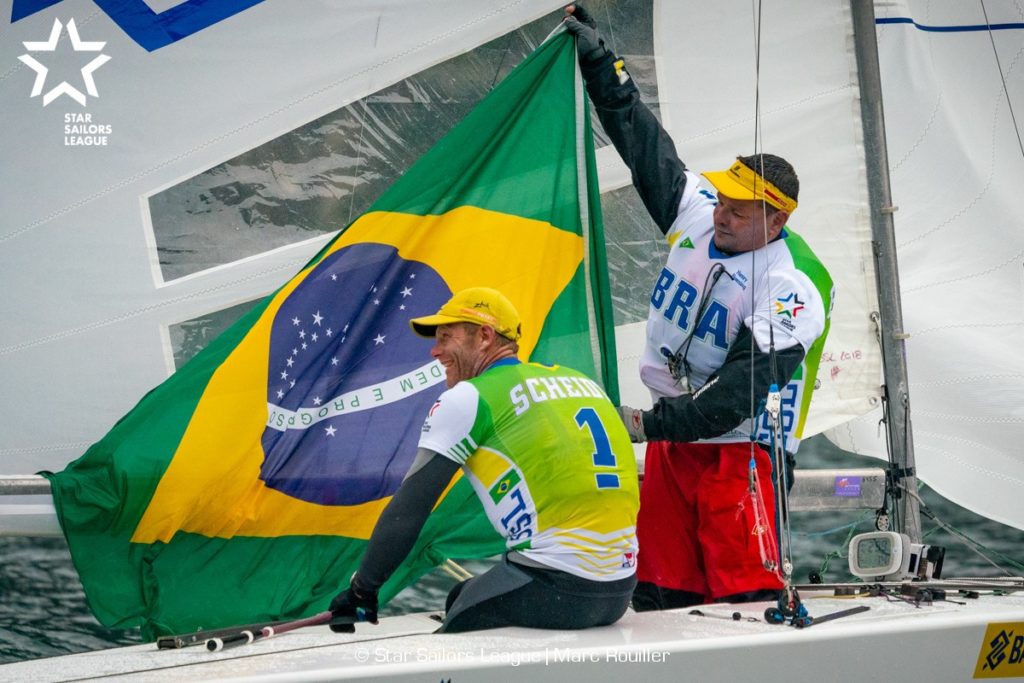 With all the shenanigans that have been going on about Olympic Classes, and what appeared to be a good chance of the Laser being booted, I looked for answers to the question, and found them in the Star Class.

If one simply looks at the really top quality sailing the star class is having at their combined Star European Championship and Star Sailors League Breeze Grand Slam in Riva del Farda, Italy, the answer is a resounding YES.

Left out of the Olympics after 2012, many felt it was the death knell of a class that had been in the Olympics since 1932. But the class is thriving, is super organised, and is attracting some of the best sailors in the world.

Here are some facts:
• With less than one week to go to the first ever combined Star European Championship and Star Sailors League Breeze Grand Slam in Riva del Garda, Italy. 96 teams from 23 countries had entered.

• The International Star Class, the Star Sailors League and Fraglia Vela Riva del Garda were still aiming for their goal of 100 Star boats on the start line on 15th May!

• The entry list read like a Who’s Who of the racing world, with at least 20 Star World Champions, five Olympic medalists and ten Olympians.

• Professional sailors as well as amateurs joined the class alongside Star class stalwarts and other legends of our sport.

These are some of the key sailors competing:
Robert Scheidt (BRA) – 5 time Olympic medallist
Vasilij Zbogar – Slovenian three time Olympic medallist
Paul Cayard (USA) – one of the most successful sailors of all time. First American to win the Whitbread Round the World Race. Winner of the Louis Vuitton Cup and just missing out on the podium at the 2004 Olympics.
Lars Grael (BRA) – Olympic Bronze medallist
Freddie Loof – Olympic champion

If one is still not convinced, here is the final press release which shows just how close the racing was, and how vibrant the class really is.

The Brazilian pairing had been the dominant force for much of the week at the Star Sailors League Breeze Grand Slam and European Championship, but they did not have it all their own way.

It was an incredibly tense final race at the end of a thrilling, and at times, heart stopping finals day in Riva del Garda, Italy. Victory came for the Brazilian in the last few metres of the last leg of the last race. “I was so tired at the end that (Henry) had to tell me that we had won I didn’t know we had. I was seeing black already, my heart rate was up that much,” explained an exhausted but elated Scheidt at the end of the day. 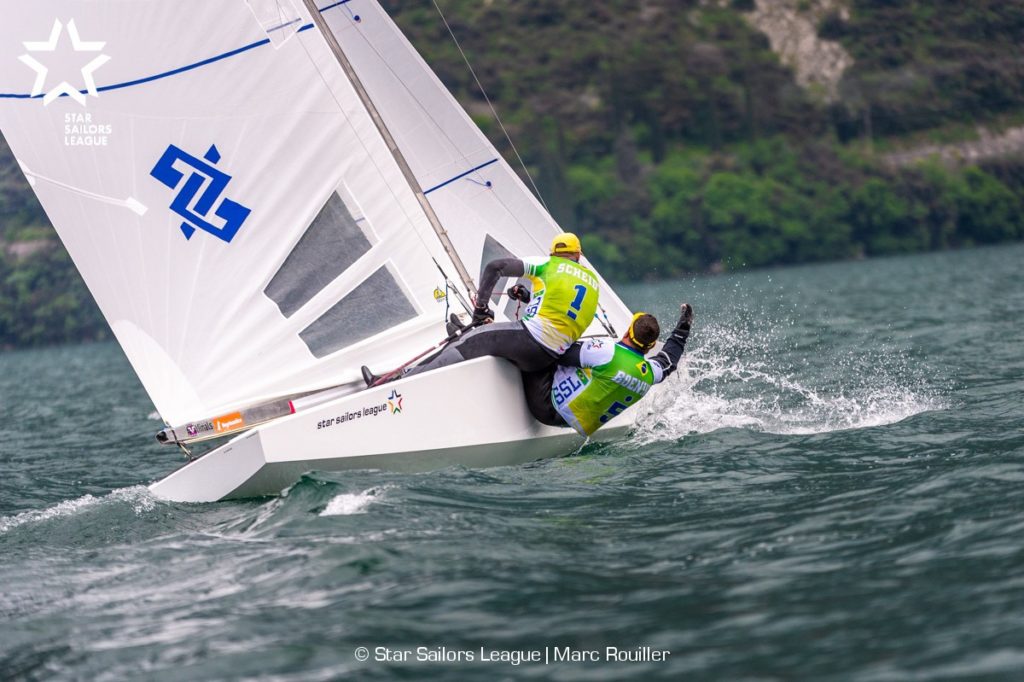 “We are really happy. It was a long week and after we were over the line in the week, it was quite tense from then on. Henry did great, he did a super job all through the week and he kept saying to me that we can still win and that gives you a lot of confidence.”

There is little that has not already been said about Scheidt’s mastery downwind, but when it mattered most today, in the closing stages, he was in another league turning a 30m deficit into victory through sheer skill and determination, it would not be hyperbole to call his performance sheer poetry.

It was an early start and a long day out on the water for some, with a single final qualifying race at 08h30 followed by two knockout races before the winner-takes-all final. Racing was once again held in the Peler wind, running from north to south down the lake and, as in the previous day, the cooler air funnelling down two valleys created some significant shifts, particularly at the top end of the course where the breeze softened and the shifts increased in both size and frequency.

The qualifying series, quarter final, and semi final could scarcely have delivered a more mouth-watering final. Of those who made it through from the qualifying series, it was early showers for Eric Doyle (USA) and Payson Infelise (USA), Fredrik Lööf (SWE) and Brian Fatih (USA), and Hubert Merkelbach (GER) and Markus Koy (GER). They were soon followed home by Roberto Benamati (ITA) and Alberto Ambrosini, and Eivind Melleby (NOR) and Joshua Revkin (USA) and Diego Negri (ITA) with Frithjof Kleen (GER). 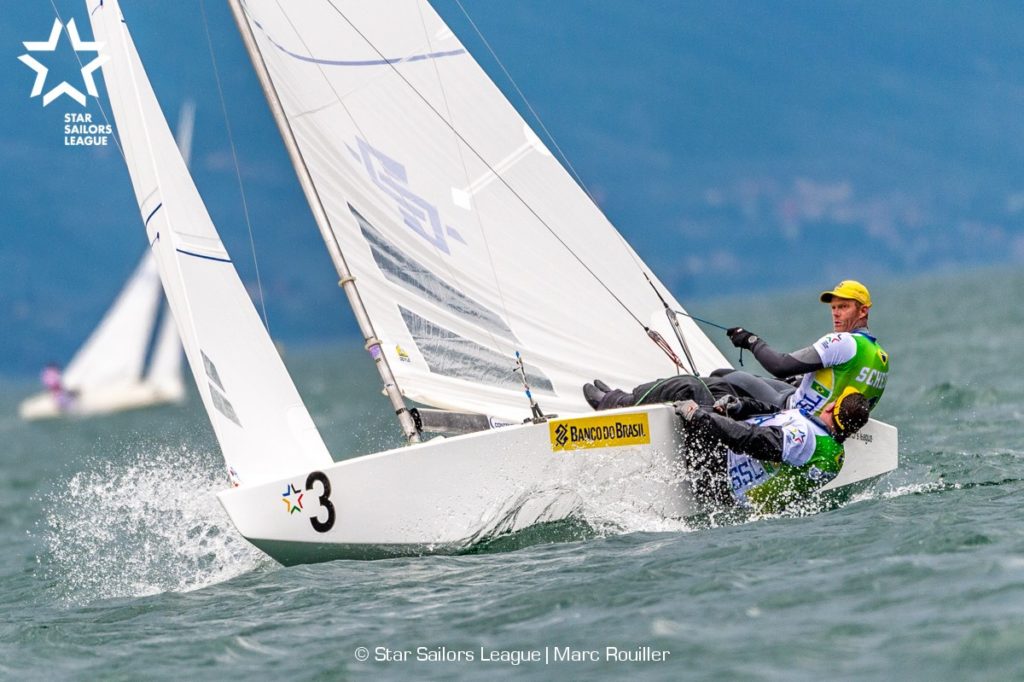 This left four teams who had been standout performers all week and it was hard to call who might walk away with the title. Of: Scheidt and Boening; Mateusz Kusznierewicz (POL) and Frederico Melo (POR); Paul Cayard (USA) and Arthur Lopes (BRA); and Xavier Rohart (FRA) and Pierre Alexis Ponsot (FRA).

Rohart and Ponsot in particular had found incredible form at the tail end of the event, winning the final race of the penultimate day, then the first race this morning, before picking up another win and a second in the knockout stages.

It was Kusznierewicz and Melo, however, who finished qualifying in top spot, earning a free pass to the four-boat final. They may well wonder whether this was a blessing or a curse as they appeared to struggle to get fired up in their single final race and never really challenged for the win.

For his part Cayard, celebrating his 60th birthday out on the rainy Lake Garda, was also looking solid and his unparalled tactical skill was coming into its own as the fleet sizes reduced. “To win this, you will need a perfect start, be fast and then it will come down to some metres here or there at some point,” he predicted ahead of the start. 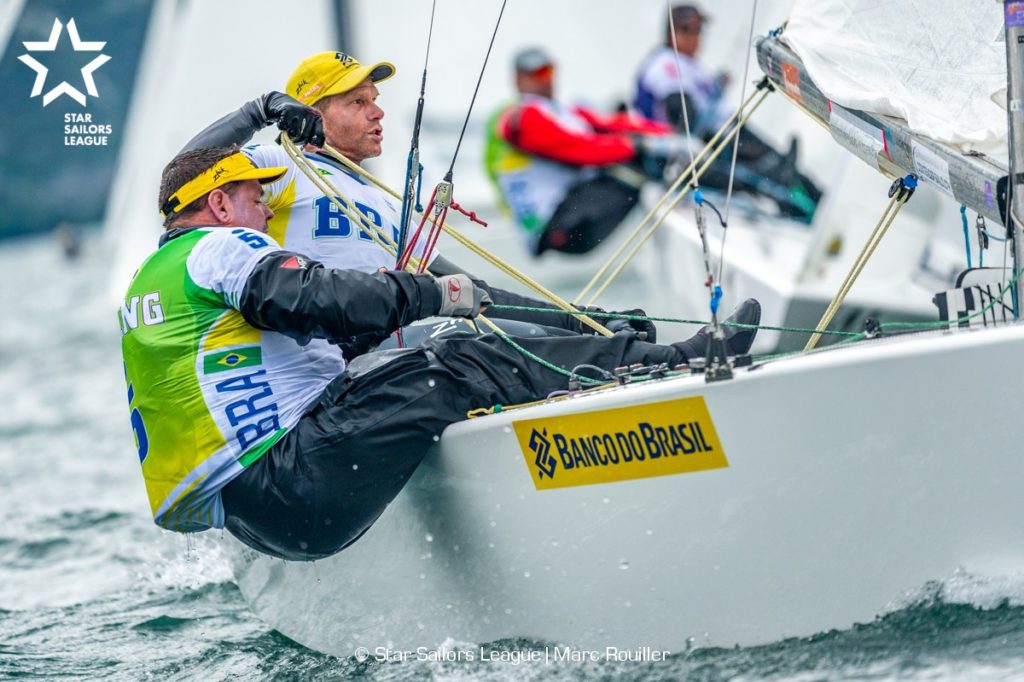 The American sailor, so revered here in Italy for skippering the Italian Il Moro di Venezia to Louis Vuitton Cup success back in 1992, barely put a foot wrong early on and led for the first lap of the final race. However, a split in the fleet saw Rohart and Scheidt, on the right of the second beat, sail past. By the final windward mark the French led Scheidt by a distance, with Cayard and Kusznierewicz further back still.

“We’ve tried really hard in the last few days to develop our downwind skills,” explained Rohart after racing. “And we said on that last upwind ‘okay, right we need to make a big gap here to prevent him coming back’, but Robert is such a specialist it was always going to be tough.”

With lighter winds and limited waves, Scheidt’s downwind speed advantage appeared reduced in the semi final, even with free pumping allowed and it was easy to believe the French had done enough by the final windward mark to take victory. What followed was a nail-biting race to the finish with Scheidt clawing in metres on the French team using all his skill to finally overhaul them right at the line. In winning, the Brazilian pairing claim the SSL Breeze Grand Slam title, European Championship title, and the biggest stake of the $100,000 prize purse. No doubt Scheidt will return to his home here in Garda a very tired, but happy man.

Despite a variable forecast and unusually wet weather, the first ever combined Star Sailor’s League Grand Slam Breeze and European Championship has been an outstanding success. Among the 92 boats competing where some of the finest sailors you will find anywhere in the world, but also taking part where any number of amateurs and weekend sailors going up against their heroes.

Most of the fleet will gather again in less than a month’s time in Porto Cervo, Italy, for the 2019 Star World Championship, where a fair amount of SSL Ranking points will be at stake and the World title, and then, the top 10 ranked with up to 15 VIPs will attend the SSL Finals 2019 in Nassau, The Bahamas, from December 2nd to the 7th.

If this does not convince you that there is still life after being booted out of the Olympics, nothing will.

The only thing these guys don’t get are Olympic medals, but that appears to be of minor concern due to the healthy close racing.