Interview Abby Ehler: “Diversity is A Benefit, It’s Not A Hindrance” 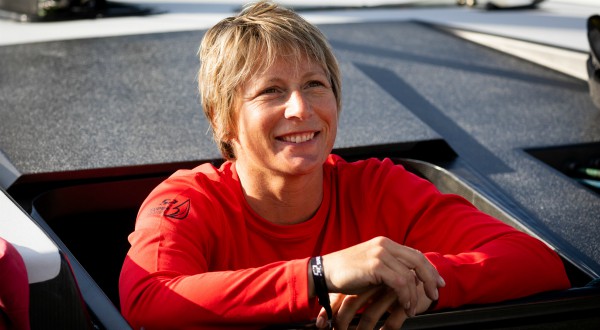 Britain’s Abby Ehler has three Volvo Ocean Races round the world under her belt after starting out with Lisa McDonald and the girls as boat captain and bowman on ‘Amer Sports 2′. She returned in 2014-15 with Sam Davies and ‘Team SCA’ again as boat captain, reprising that same highly responsible post on ‘Brunel’ in the last Volvo. Since last year she has moved from mainly offshore roles to sail on the 52 SUPER SERIES as the only full time female pro sailor in the grand prix inshore fleet, racing as mid bow on the Plattners’ ‘Phoenix’ team. Late last year she completed the first Transatlantic of a modern IMOCA in fully crewed ‘Ocean Race’ mode. Tip & Shaft caught up with Abby in Cape Town…..

Abby how did you get into the 52 SUPER SERIES on to the Phoenix team?
Actually I was brought in by Adrian Stead last season, partly because I’d run a TP52 about 10 or 15 years ago, actually Stuart Robinson’s ‘Stay Calm’ as it was. We ran that campaign for a couple of years. I guess the position that they needed and the weight that they needed helped and Ado (Stead) to his credit is pretty keen to help get more women into the sport at this level. Here I am.

You have a pretty physical key role as mid bow, how is it operating at this high level?
It’s been fantastic, the sailing is phenomenal. It’s so cutthroat that you just cannot make the slightest mistake or it can be a big problem.

You have had to raise your game?
It’s a different style, I guess predominantly most of my sailing has been bigger boats and offshore. When you’re offshore the level of detail is perhaps not as key in that mistakes happen over longer periods. Consequently you have a longer period to sort out those mistakes and usually time to recover. This type of sailing the race is an hour long if that. Even the slightest mistake is punished heavily. It’s a very, very detailed sport. The boats are very technical and very lightweight. Everyone has their position and you’re doing your job.

How is it being the only female full time professional on the circuit?
I tend think about it from the point of view of how do you not become the only girl or one of a few. I ask myself ‘what are the barriers to getting involved and what can be done to change that?’ But, the reality is that you just have to be at this level. It is very physical in most of the roles apart from those that are maybe a bit further back in the boat. You’ve got to be sailing and working at this level. And I think I’ve realised that even considering myself relatively experienced there’s still a lot to learn.

Such as?
I think it’s just details. It’s the way you lay your sheets and what goes where. The mechanics are just so critical, and it’s split second timing. And you don’t want to mess it up. Getting your foot in the door is obviously the biggest barrier and I think that is gender irrelevant. The harsh reality is it’s hard for anyone to get to this level and even harder for women. There aren’t many women in this field so it’s hard to look around and think ‘how do I get there’ when you can only see one girl or two girls, ‘there must be a reason for that’.

Is it harder on the boat being a girl in your role?
I don’t think so. It is about doing your job. I guess there’s a little bit more pressure because you don’t want to be the one that f..cks up. There’s that fear of someone looking at you and saying ‘oh it’s the girl that made the mistake’ because you get that tag. I think in terms of creating change, with a lot of the sustainability and diversity agreements being signed by classes it’s understanding that it’s about bringing more women into the sport for a sustainable future and understanding that diversity is a benefit it’s not a hindrance.

Your helm Tina Plattner is proving a very competitive driver and a great inspiration?
She’s fantastic, what works very well is that she’s very tuned in to Cam (Cameron Dunn) and Gerry Mitchell who is main trimmer. Tina has got a great feel for the boat and is able to zone in and do her job, I think that’s sometimes a struggle with owner-drivers, they like to look around and like to be part of the decision making process and sometimes that’s an adversity. You do need that helmsman to just lock in and trust the people around them and Tina does that exceptionally well. Mixing it up in some of those starts I would be absolutely crapping myself if I was helming the boat so she does a really great job and there’s a really pleasant environment on the boat.

So you are taking steps to do another Round the World race, The Ocean Race?
I think if you’d asked me that two years ago I would’ve said ‘No that’s it, I’m not doing that again’ because I always say that. It’s such a hard race. I mean physically, mentally you come away spent, back at absolutely ground zero mentally and physically. But it’s in your blood and once that fever starts building again it’s really hard not to be a part of it. Recently Charlie Enright called me up and said would I come and do the delivery from Salvador to Lorient on the Open 60. I was very apprehensive about this whole Open 60 in general. I’d never sailed one before and for that reason I don’t know how to sail foiling boats and it just struck me as a league above anything I could aspire to. The reality is now that having done that delivery is that it is just sailing, it’s trimming sails and driving a boat and that doesn’t change. There’s a slightly different aspect to it with the foiling, but the guts of it are the same. The systems are still the same and someone still needs to be on board to understand the systems and stop them from breaking down. All in all it was a very interesting trip and I came out of it thinking yes, I definitely want to be a part of this.

We are likely to see you with 11th Hour then? And how was it on the IMOCA in Ocean Race fully crewed mode coming back across the Atlantic?
Yes, we are still talking, and the boat is currently in refit so they’re in a bit of a down phase at the moment. The plan is to do a bit more sailing with them this season. We were six on board, we went in the Ocean Race configuration, five sailors and one OBR. In terms of the ergonomics of the boat its was nigh on impossible. It’s ergonomically set up for one. It was absolutely horrendous, it was terrible. I think that was the whole point, to work out what needs to happen to make it live-able and sailable by the whole crew configuration. The motion of the boat is very similar to a RIB where you get that continual hard punching so that makes sleeping very difficult. I think that is going to be a key factor, setting up a sleeping arrangement for however many crew you have off watch. And inside even down to the galley and toilet was very interesting It needs to be thought through for the new set up. Space is a factor. If you are doing a manoeuvre with the full crew on deck you don’t need everything to be concentrated in one place as for example on Alex Thomson’s boat where everything comes out a central pit. You can have it slightly spread out so you can have two people on the grinders, one operating the winch one person driving and one on the bow. We just looked at what’s going to be the best set up so that you’re not standing on top of each other which we were on the existing boat.

What watch system did you run and how did it work?
We run it so there’s two on deck, a floating navigator, rolling every couple of hours so every two hours you have one person change.

And compared to the VO65 then very different….?
It’s half the amount of people that you would’ve had on deck. It’s a different game and the fact that your predominantly indoors with the hatch closed you can talk to each other and you’re not getting pounded by waves every few seconds.

So a very different experience….physically easier?
You’d think so, from spending two weeks in the Southern Ocean getting pounded by freezing water, to not have that it’s got to be a gain in terms of personal endurance. But from that side of things it’s very different not having the apparent wind on your face, not having that visual first-hand look, seeing what’s ahead of you, waves coming over, looking at the sails, it’s almost like a confined environment looking through windows or cameras, it’s a very different side of sailing compared to being exposed. It takes a while to adapt, you’ve spent your whole life being exposed to the elements, that’s how you gage your speed, your angle, your wave pattern so it’s very different. You do adapt to it, but with change it takes time.

And so in terms of the composition of a crew’s skillsets it is going to be everyone ‘polyvalent’ all rounders?
Yes, everybody has got to be able to do everything whether that’s driving, trimming, doing the bow and everything in between is the key. For me personally what I’m bringing to that team is a boat captain role, as well as being able to do all the other jobs. I wouldn’t say that driving and trimming is not yet my best skill set, but it can definitely be brought on and worked on, it’s time on the boat. And Charlie is definitely looking to trial and train other girls and guys because I would’ve thought the attrition rate could potentially be quite high even just the speed the boats are going.

And what other sailing do you have planned?
This year I’m going to go do a little more dinghy sailing, do a bit more foiling. I’m going to go to Pro Vela in Spain and am hoping to tick some boxes there. Otherwise I’ve got lots of irons in the fire.