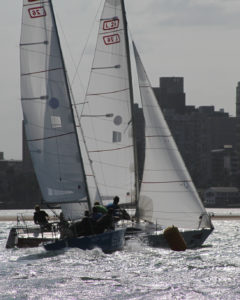 Defending their title, the team from University of Stellenbosch made it two in a row claiming the title of the Inter-Varsity Match Racing Champs hosted by Point Yacht Club this week.

In a replay of last year’s finals, Stellenbosch met their nearest rival, University of Cape Town. Helmed by Iliana Boura, who drove the boat for Stellenbosch for the second year running, the deserving team took the win 2 – 1 in the best of three finals. The first race was discarded due to a technicality with a judging miscommunication. The re-run of the first race went to Stellenbosch who had a clear run down to the line. The second race went UCT’s way, after Alex Lehtinen got his nose in the front and kept the lead the entire way.

In the deciding race, the red boat with UCT onboard, had the lead on the first lap, but got a dreaded penalty flag for an infringement in the starting sequence, and waited till they were down at the bottom pin, before doing a 360 clearing their name. Stellenbosch latched onto the lead and just managed to keep UCT behind them, gliding across the line with a mere half a boats length in their favour.

Boura who was co-skippering with talented 505 and 470 sailor, Alexander Ham for the second year, said, “It was actually really tight competition on the water, different to last year. There was a lot more competitive boats racing this year and everyone did their homework in regards to the match racing rules. Last year we only had competition from UCT but this year, I was impressed with all of the teams.” 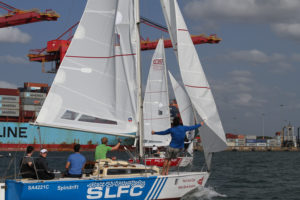 Talking about the best of 3, Boura stated, “It was fabulous taking on UCT, we challenged and pushed each other the whole time. It was really close racing with the guys giving nothing. The guys on my boat had a great understanding, and Alex and I figured each other out quickly and we had fantastic communication onboard. We chatted about tactics, when to tack, what to do in the build up to the start.”

Boura, who dominates the fleet racing in the Laser class, has only half a year experience on keelboats, and is part of the team from Milnerton Aquatics Club who will be campaigning in this year’s Lipton Cup on Colour of Magic. “I am studying a BSc, in my second year so I hope to be back next year to defend our title. And if all goes according to plan, then I might be back in my honours year as well!”

The first race of the last day was for third place, local lads flying the burgee for Durban University of Technology met University of Pretoria early on in a building breeze. DUT shot out of the starting blocks, edging comfortably in front, favouring the left of the course, while the visiting team tacked away, keeping to the right side of the course. Disaster struck for the local, experienced team as skipper, Nhlanhla Phakathi embarrassingly wedged their boat on the sandbank, losing the lead and being forced to retire from the race as UP walked away with an easily won third place.