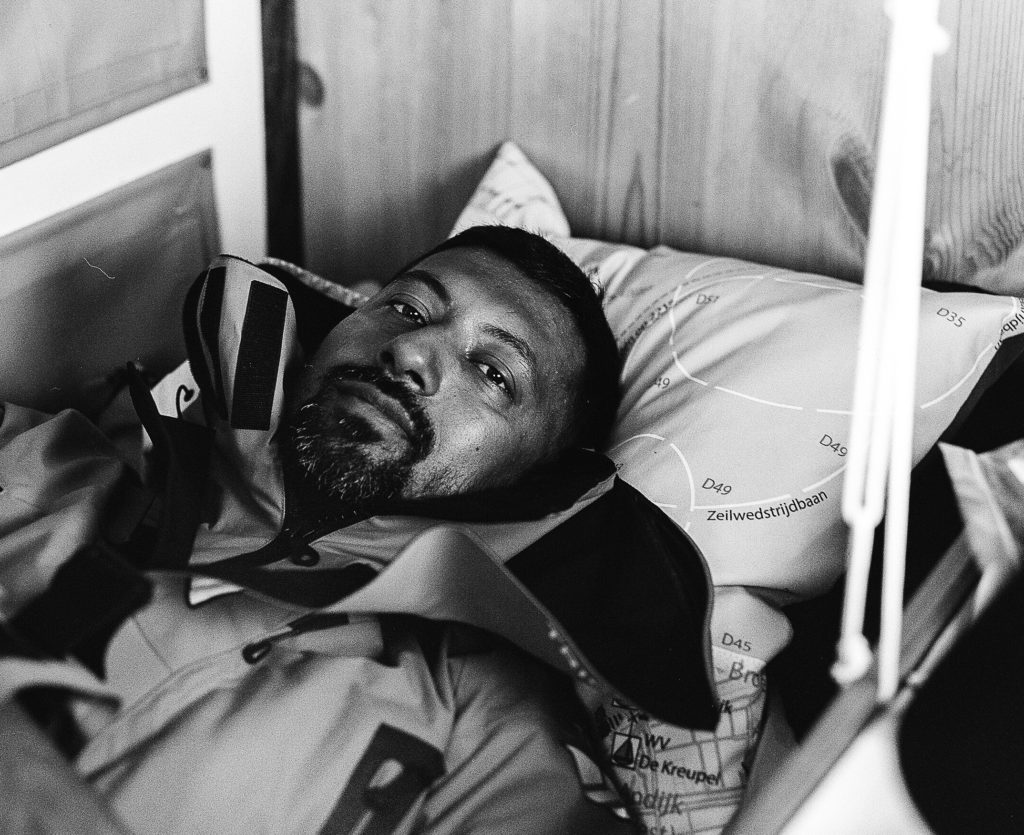 A library photograph if Indian skipper Abhilash Tomy lying in his bunk aboard Thuriya.
Pic by Nick Jaffe/PPL/GGR

The French fisheries patrol vessel ‘Osiris’ reached Tomy’s yacht at 05:30 UTC and her crew successfully transferred him to the ship. The Joint Rescue Co-ordingation Centre in Canberra which co-ordingated the rescue reported: “Tomy is concious, talking and onboard the ‘Orisis’. Australian and Indian long range P8 Orion reconnaissance aircraft are circling overhead. Thuriya’s position is 39 32.79S and 78 3.29E

Weather conditions are favourable: 15-20knots from the South West, 2m swells and good visibility. A radio briefing was held between the Maritime Rescue Co-ordination Centre on Reunion Island, a doctor located on Amsterdam Island, and the master of the ‘Osiris’ before the French crew boarded ‘Thuriya’ from Zodiac inflatable boats to administer immediate first-aid and assess his condition.

Abhilash Tomy, 39, is a Commander in the Indian Navy and has been confined to his bunk, unable to move since his yacht was rolled through 360° and dismasted in a vicious Southern Ocean storm last Friday.

Fellow GGR skipper Gregor Mcguckin whose yacht Hanley Energy Endurance was also dismasted in the same storm last week, is making 2.2 knots towards ‘Thuriya’s’ position, sailing under jury rig. The 32-year old Irishman is still 25 miles to the West and in radio contact with the reconnaissance aircraft. He is not in distress but has asked for a controlled evacuation from his yacht.

Faced with a 1,900 mile sail across the Southern Ocean to Western Australia under a small jury rig and without an engine (his fuel was contaminated when the yacht capsized), this is a responsible decision taken by a professional sailor when all the rescue assets are close by. The alternative would have been to continue sailing singlehanded without the aid of self-steering (also smashed in the capsize) and risk having to call on the Rescue Services again should he be disabled further in another storm.

Once the two solo yachtsmen are safely aboard the Osiris the French fisheries patrol ship will proceed to Amsterdam Island where the rescued sailors will be given a full medical examination. The hospital on Amsterdam Island is well equipped with X-ray and ultrasound equipment.