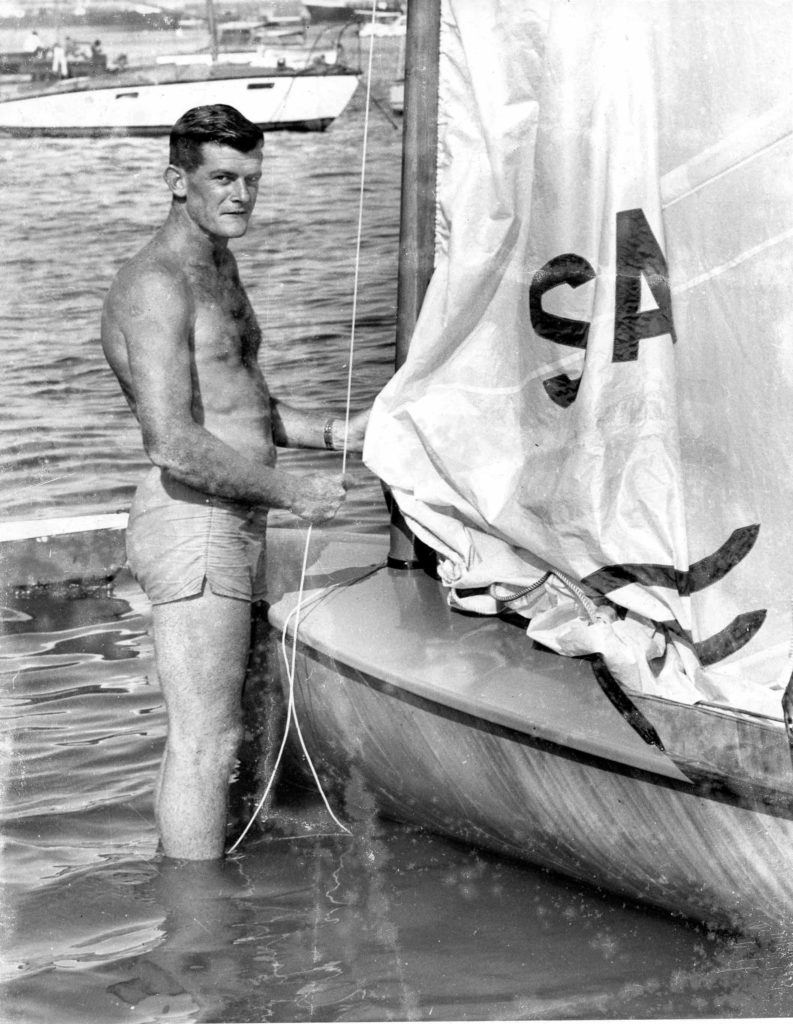 Bruce McCurrach in his prime.
pic by Jimmy Hutton

It’s not often one can refer to someone as a ‘legend’, but Bruce Mc was simply that and I am very privileged to have known and worked with him.

He was a very fine sailor, but modest, humble and liked by everyone.

I am not going to write much more than this about him as his nephew Steve McCurrach has supplied some good insights into this legend.

I am indeed honoured that several years ago Bruce sent me his personal sailing archive for safekeeping. As a result I will select some items from that and post them soon.

Here is what Steve McCurrach supplied:

The Chairman of SA Sailing Phillip Baum wrote an incredibly accurate and glowing biography about Bruce in 2016, the transcript of which I have attached for you. Little would Phillip have known that his ‘Bruce bio’ now serves as a marvellous eulogy to a great man.

Bruce “Moose” McCurrach retired to Knysna after a lengthy innings of top notch yacht racing, mainly under the burgee of Durban’s Royal Natal and Point Yacht Clubs. Bruce was at the sharp point of Knysna Yacht Club’s (KYC) famous Lipton Cup victory in 2010 as team manager. KYC awarded honorary life membership to him. When the SA Sailing president Phillip Baum heard of this award, he was quick to pen a congratulatory note on behalf of SA Sailing, an extract of which follows:

“Bruce McCurrach is a national sailing icon and a personal life hero. It is my privilege to count him as a great friend of many years standing and my first boss when as a student I worked in the Elvstrom retail outlet in Johannesburg. We met for the first time when I was not even a teenager in the mid 1960s. He arrived at the Flamingo Yacht Club in Welkom with his upturned Finn strapped to the roof of his VW Beetle. This was a few years after he had won the hugely prestigious Kieler Woche regatta in Germany in 1961 in the Finn class, and he did this as a complete unknown by winning multiple races in strong winds, sailing in The Baltic in a pair of shorts and a rugby jersey. Desperate to emulate his performance, some of his fellow competitors ill-advisedly took to the water, similarly stripped down and they froze on the water.

“Subsequent to this Bruce met Paul Elvstrom and became a business partner, opening an Elvstrom sail making loft in Durban and became a training mate to ‘The Great Dane’. These sailing experiences caused Elvstrom to laud Bruce as “the best heavy weather Finn sailor in the World” in his book ‘Elvstrom Speaks on Yacht Racing’ – no mean accolade from arguably the World’s most successful yachtsman ever.

“His many sailing exploits have seen him win multiple National and Provincial championships around the country, as well as regattas internationally. In 1974, sailing with Paul and another international star Hans Fogh, Bruce became a World Champion at the Soling Worlds in Palm Beach, Australia.

“Bruce has always been a larger than life figure in the sailing world. His quiet approachable presence coupled with an impish sense of humour and a ready chuckle is a magnet. It was not for him to seek the limelight or push volubly for the public moment. The stature of his towering presence comes from his phenomenal competitive success, always underscored by scrupulous fair play and sportsmanship. He truly walks in the Hall of Fame of sailing in South Africa.

“All at SA Sailing congratulate Bruce on his elevation to being made an honorary life member of Knysna Yacht Club and we salute the club for it’s foresight in singling out Bruce for this great honour. To fully acknowledge SA Sailing’s respect for Bruce, the pedigree of Paul Elvstrom should be noted: Paul won four Olympic Gold medals, three of these over 12 years in the tough Finn class. So if Paul wrote that Bruce was the best heavy wind Finn sailor in the World, that’s a mighty tribute to KYC’s Bruce McCurrach.”

In chatting with my Dad, Ted McCurrach, he shares memories gong back much earlier than Phillip’s meeting with Bruce. Ted tells of Bruce being a kid ‘bailer boy’ during his introductory years to sailing. You can imagine the position and discipline of the bailer kid, never allowed to get in anyone’s way and probably seldom seen above the gunwales, only bailing and changing the dagger board per tack – but surely in Bruce’s case, also watching every move of the yachtsmen.

I have recollections said Steve McCurrach, as a kid of visiting at my grandparents’ home in Glenwood, where Bruce was building a Finn from wood – and he was an absolute craftsman, later on taking that skill into local manufacture under license in SA, of several Glass types. Bruce also had numerous stints at Intercontinental yachting regattas, annually at Cowes Week in the UK and the list goes on. One visit to Cowes Week concluded with a social visit to a fellow crew member’s home in Dublin, where Bruce shared a delightful story surrounding his favourite brew – a Guinness – and I look forward to sharing that tale with you sometime soon. Throughout Bruce’s life there was a common denominator; he was always doing something in yachting and he was always loved by everyone – most of all by Ada.

I am not a Naval man, but I am now piping this admired Admiral of yachting off the deck and then I am going to sit quietly and have a few Guinness’s. Cheers.